Police Release Detained Practitioner Who Stood Up for Her Beliefs

(Minghui.org) Falun Gong practitioner Ms. Zhang Li from Guangzhou City was recently arrested. After talking to the police about Falun Gong, she was released the next day.

Ms. Zhang and two fellow practitioners were telling people the facts about Falun Gong on August 16, 2015. A student, who had been deceived by the Chinese Communist Party's propaganda, reported them. Police arrested Ms. Zhang and another practitioner.

Ms. Zhang persistently clarified the truth about Falun Gong to the police and the student.

“My young friend, what you did is not good for you. We follow the principles Truthfulness-Compassion-Forbearance. There is nothing wrong with it,” she said to the student. “If people would keep these three principles in their hearts, there would be no poisonous oil and fake medicines, nor would there be so much corruption.”

She continued, “You asked the police to arrest us. You also harmed them. Jiang Zemin, who launched the persecution of Falun Gong, is being sued by people worldwide. He persecuted my family. He also persecuted you. It’s a heavenly principle that no one can escape punishment for bad deeds.”

Three officers came to the interrogation room. They harassed the two practitioners and handcuffed their hands behind their backs.

An official named Chen entered the interrogation room the next morning.

“Falun Dafa is good! I hope you have a bright future. And I won’t cooperate with you for anything you want,” said Ms. Zhang.

She was taken for a physical examination in the afternoon.

“My left hand was fractured before.” she said. “I will hold you responsible if it fractures again.”

The police took off the handcuff. Her hands were already covered with bruises. 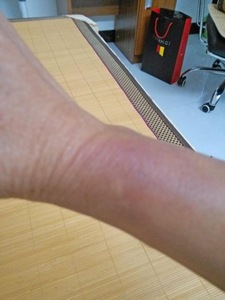 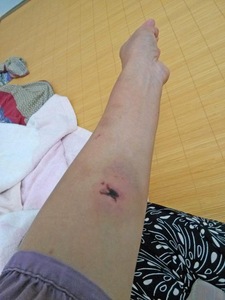 Bruises and injuries on Ms. Zhang Li’s arm and hand.

“You talked about Falun Gong to three students, and we recorded their report,” said Chen. “You gave them fliers and amulets. You had 54 fliers, 10 copies of the Minghui Weekly, 1 Shen Yun DVD, and 4 amulets. You violated the social safety regulations. Do you want to appeal?”

“I completely reject everything you said,” Ms. Zhang replied. “I’m a Falun Gong disciple who assists her Teacher in saving sentient beings and rectifying the Fa. What we do is the most righteous. Jiang Zemin committed crimes. You are also committing a crime.”