CEO: How I Survived a Fatal Accident

(Minghui.org) The Chinese Communist Party (CCP) has deceived people with propaganda against Falun Dafa for 16 years. When they learn the facts, many people choose to support Falun Dafa. Their courage in supporting the innocent in the face of this harsh suppression, often brings blessings and miracles. Below is a story that occurred to the CEO of a foreign firm last summer.

A Card vs. a Pendant

Last year I went to a fortune teller and he told me that my life may be in danger. Following his advice, I bought a pendant with the image of a deceased CCP leader and hung it next to my car's rear view mirror.

One day a friend saw it. He is a Falun Dafa practitioner and often talked to me about the practice and explained why the Party spread hate-propaganda, including the staged self-immolation incident. He said, “We both know Mao and the Party have harmed a large number of Chinese through its political campaigns, such as the Cultural Revolution. The Party itself could face serious consequences for damaging traditional culture and Chinese moral values. Tell me, how could such a dead person do you any good?” He asked.

What he said did make sense. He recommended that I remove the pendant and carry a card with me instead. “Keeps these words in your mind and say them when your life is in danger, you will be saved,” he said. 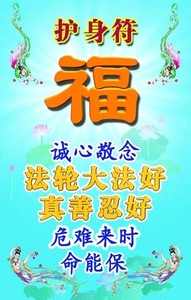 We talked about this several times. I followed his advice, and I accepted the card and quit the Chinese Communist Party (CCP) organizations.

Then a miracle happened.

The temperature was high last year before noon on June 16, close to 104 degree (or 40 Celsius). I was driving on a highway at about 80 miles (or 130 km) per hour. I had not quite recovered from a minor fever the day before. Nonetheless I kept driving because I had to return to work.

About 20 miles after I entered the highway, there was suddenly a loud noise. Before I knew what happened, the vehicle started to tumble wildly like a roller coaster. Realizing I had a flat tire, I stepped on the brake. With that, I totally lost control of the vehicle. The last thing I remember seeing was the highway guardrail.

I did not know how long I lay there before I regained consciousness. A burning smell filled my nostrils. Opening my eyes, I noticed my glasses were gone. The left side of my head was covered with blood, and the safety belt restrained me tightly.

As soon as I loosened the safety belt, I fell—it turned out the vehicle was upside down. I lay there for a while trying to figure out what happened. Looking around, I saw blood and smashed glass. I realized I survived the accident.

Card in a Wallet

I made my way out of the vehicle and found myself next to the center guardrail. It seemed my vehicle was bounced across the highway from side to side, turned upside down, and then slid forward. Scattered behind it was a trail of my things: a towel, cologne, and other small objects.

My shoes were gone and the ground was too hot to walk on. I tiptoed over to grab a towel and wiped the blood off my head. Thinking the vehicle might explode, I moved away from it. To avoid traffic that drove around my Jeep, I went to the side even further.

I waved to passing cars for help, but no one stopped. I reached down for my phone, but it was gone. Surprised, I noticed my wallet was in my back pocket. I clearly remembered putting it on the car seat—how could it end up in my pocket?

Opening the wallet, I saw the little card my friend had given me. Immediately I knew I survived the accident because of the card. And I was very grateful to Mr. Li Hongzhi, the founder of Falun Dafa.

“You Are a Lucky Man”

Finally a truck stopped. The driver talked with me and called the police, who came 10 minutes later. An officer handed me a phone to call my parents. An ambulance came. Before we left, my father arrived. He was terrified, but then excited to see me safe.

My father checked the vehicle and discussed the accident with the police. My Jeep was totaled: the body smashed, top caved in, tires damaged, all six airbags popped open, and the vehicle had slid nearly 60 yards.

“You are a lucky man,” one officer said to me, “In an accident like this, you could have died many times.” But I did not. Fortunately the drivers seat was intact and it protected me like a shield, the officer said.

The ambulance took me to a nearby hospital, where I underwent ultrasounds on my head, chest, and stomach. I was not injured at all. The doctor said, “You only have minor scratches on your head and arms. We will give you medicine to stop the bleeding, plus antibiotics, and then you are free to go.”

I worked at home for two or three days and then went back to work. I explained to my surprised coworkers how a little card miraculously changed a person's fate.

“Good Coordination Helps Us to Not Leave Any Practitioners Behind”

“Opening the “Locks” in the Hearts of Children”