(Minghui.org) Coordinators from more than 200 Falun Gong exercise sites in southern Taiwan assembled in Chiayi City on August 15 and 16 to share their experiences cultivating Falun Dafa.

The practitioners studied the Fa and shared experiences in 30 small groups for the first day and a half. The final afternoon, everyone gathered together and listened to 12 practitioners read their experience sharing papers. 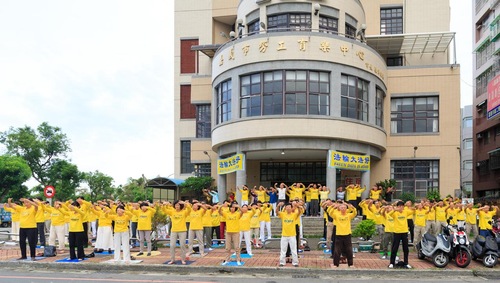 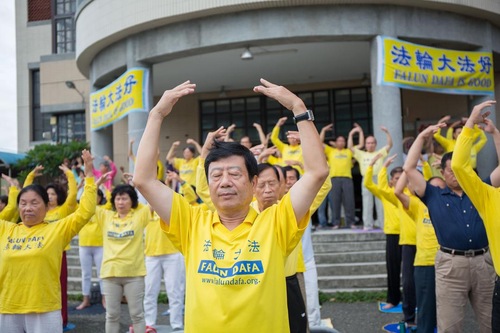 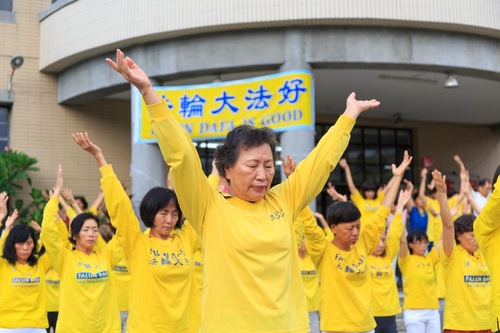 Group exercise in the mornings 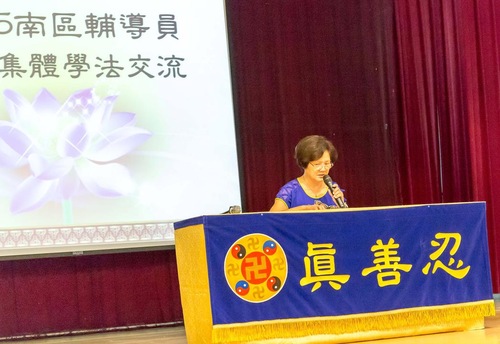 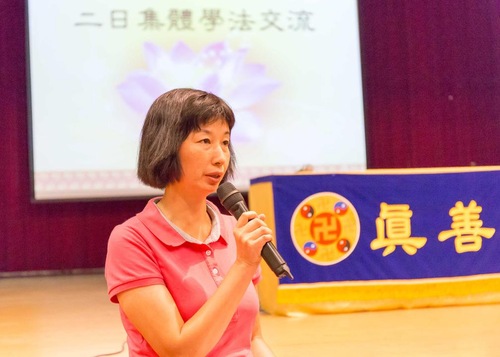 “Solid belief in Master Li and the Fa helped me to get through severe sickness.”

Mr. Yang Rongzong from Tainan got sick in January. Severe pain started in his stomach, went to his heart, and finally reached his head. He could not eat or sleep and even writhed on the ground in pain. His family took him to the hospital. In the emergency room, he recalled Master's teaching. He checked out of the hospital and went home.

“In the following days, I sent forth righteous thoughts and listened to Master's lectures. Although I could not get up to do exercises, I listened to the exercise music and did the arm movements in bed.

“I can still recall a few amazing scenes that Master showed me when I had intense pain. First I saw the words 'Believe in Master and the Fa while protecting the reputation of Master and the Fa.' Then, in front of my eyes, two large words, 'Righteous Thoughts' appeared.

“After that, I saw Master heal a patient who had been paralyzed for 18 years. Then I saw a large crystal lotus flower, shining and flying towards me with a gold Falun. Finally, I saw Master standing far away wearing a kasaya.

“Tears covered my face. I set aside the concerns of life and death.”

The next day, Mr. Yang was able to fall asleep. He slept for four hours, and all the pain was gone when he woke up. He was full of energy and could even run up and down on the stairs, as if nothing had ever happened to him.

“Solid belief in Master Li and the Fa helped me to survive severe sickness,” he said. “My appreciation for Master cannot be described in mere words.”

Mr. Su Cheng is the coordinator of the site at Chungshan University. Practitioners, mainly students and faculty members of the university, used to meet once a week to study the Fa, do the exercises, and discuss upcoming activities. He believed that group Fa-study once a week was not enough. He suggested a daily Fa-study of Zhuan Falun, new lectures, and a short paragraph of Zhuan Falun in English.

The cultivation environment at Chungshan University has been very good. “This is due to our long-term daily Fa-study and sharing. We often share our understandings of how to balance cultivation and school work. We also encourage fellow practitioners to collaborate on Dafa projects. When everybody works together, the results are good. Many practitioners at our site cultivate diligently; they participate in the daily Fa-study, sharing conferences, and Shen Yun promotion.”

Mr. Su said: “I've learned a lot as a coordinator, especially how to not put myself first. I used to have a lot of pride. When other practitioners gave their opinions, I didn't have the patience to let him or her finish--I often interrupted them and started to talk. Now I know that is a bad behavior, because it keeps us from communicating with each other well, and other practitioners will be afraid of me.

“Now I try to change myself. Although I am often resistant, I try to suppress that resistance and am now able to listen to other practitioners patiently and wait to respond until they are done.

"As a contact person, it is important to be willing to change, and to recognize and get rid of one's own shortcomings. Master will arrange the best for us, if we are willing to take the burden and sacrifice for our fellow practitioners. Although the process might be painful, you will always find that you've improved afterward.”

Jinyan started cultivation in 2001. She said, “The most important thing for the coordinator of an exercise site is to believe in Master and the Fa. Cultivating oneself and helping fellow practitioners to do the three things well--that is the best way to help Master rectify the Fa.”

Jinyan shared how she looked inward and resolved conflicts with a fellow practitioner at the exercise site.

“A senior practitioner yelled at me several times. I thought he looked at things from the viewpoint of a military officer, not from the Fa. I was very upset and cried all the way home.

“Once I assigned him a remote area to promote Shen Yun. He was mad. I kept apologizing to him, but he yelled at me again. Later, I looked inward. I reminded myself that a contact person should not have any notions about fellow practitioners, and should be compassionate and tolerant. When I put down my bias, I discovered that this practitioner had many merits.

“I got rid off my negative opinions about him. Due to the improvement of my xinxing, he gets along with me very well now and often praises me in front of other practitioners.”