Over 120,000 People File Criminal Complaints Against Jiang Zemin – The Public Will Cannot Be Ignored

(Minghui.org) Over 120,000 people filed criminal complaints against Jiang Zemin, the former head of the Chinese Communist Party, between the end of May and July 30, 2015. They urge the Supreme People's Procuratorate and the Supreme People's Court to bring Jiang to justice for his abuses of power in orchestrating the persecution of Falun Gong in China.

Over the past 16 years, deaths of more than 3,800 Falun Gong practitioners due to torture have been confirmed. The actual toll is likely higher, because such information is tightly censored in China.

In total, copies of 99,155 complaints from 120,125 Falun Gong practitioners and their family members were submitted to the Minghui website from the end of May to July 30. 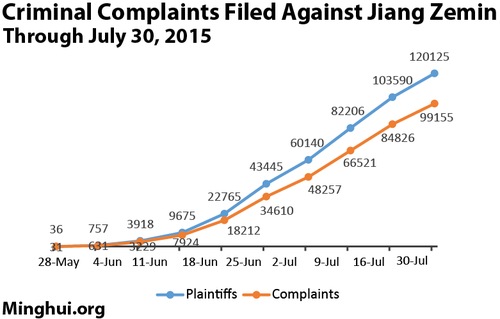 Some of the complaints have been withheld by agents of the Ministry of State Security in Beijing since July 1, 2015. The 610 Office and the Domestic Security Division in Nanyang, Henan Province; Changchun, Jilin Province; Shijiazhuang, Hebei Province; and Heilongjiang Province have also intercepted the lawsuits.

When some practitioners called the Supreme People's Procuratorate to ask if their mailed complaints had been received, they were told, “Your local police station intercepts such letters." But the Procuratorate staff then suggested, “Report them,” and provided a hotline number for reporting illegal interception of mail.

Harassment and Arrests of Plaintiffs

The 610 Office and Domestic Security Division officers in some areas recently harassed and arrested Falun Gong practitioners who filed complaints against Jiang. The situation in Harbin, Heilongjiang Province, is the worst. Dozens of practitioners were arrested in Shuangcheng, Acheng, and Bin County, Harbin. After they were released, another batch was arrested.

Officers with the Sandaogang Township Police Substation in Yilan, Harbin arrested practitioner Ms. Zhao Shuyan on July 10. Officers tried to intimidate her into dropping her criminal complaint and renouncing Falun Gong. She refused to comply and was detained in Harbin Detention Center. More than 20 practitioners were detained two days later for the same reason.

Finding Out about the Persecution

The massive wave of lawsuits against Jiang has focused the public's attention on the persecution of Falun Gong and the brutality of the perpetrators. As a result, the authorities involved in the persecution in many areas are becoming less aggressive.

Police and officials in some areas recently made phone calls or visited practitioners about their lawsuits. Some listened to practitioners' explanations, said they would learn more about Falun Gong, and even chose to quit the Chinese Communist Party and its youth organizations.

610 Office agents visited the families of local Falun Gong practitioners who were imprisoned in early July. “My husband practiced Falun Gong for better health, because he had been sick,” said the wife of one practitioner. “He got well and spread the news. But you sentenced him to prison! Falun Gong teaches people to improve their morality. What is wrong with you?”

The officials left soon after hearing her what she had to say. One said, “Actually, we know the Party is no good!”

“Podcast (Cultivation): “Maintain an Unwavering Belief in Master and Dafa, and Strive to Walk the Fa-rectification Path Well””