(Minghui.org) “We should set off firecrackers to celebrate!” said a Chinese visitor at a tourist site in Europe in response to news that hundreds of thousands of Falun Gong practitioners have filed criminal complaints against former dictator Jiang Zemin to China's highest courts.

Another Chinese tourist said, “What are we afraid of, now that Jiang Zemin is facing his downfall? I am renouncing my communist organization membership now!”

An elderly man learned the news of the lawsuits against Jiang and said, “Suing Jiang is great! Every Chinese has suffered under his policies. We should bring him to justice. What's wrong with Truthfulness-Compassion-Forbearance (the tenets of Falun Gong)? That's exactly what China needs.”

“What Jiang has done is against the principles of Heaven,” he added. “He has to be held accountable by the law!” 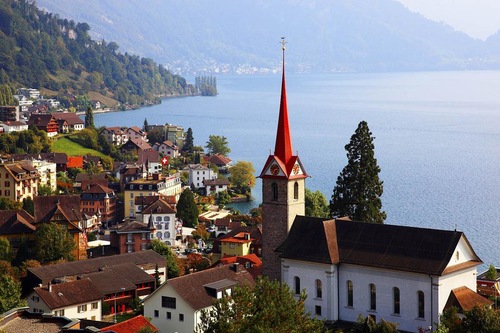 Since the time that the persecution began, Chinese tourists in Europe have gradually become more open to hearing Falun Gong practitioners' side of the story.

In Lucerne, Switzerland, a man called to his group members upon spotting a Falun Gong activity. “Hurry over. Let's hear what they have to say. Let's hear another voice rather than just one single voice all the time!” His fellow tourists gathered around and listened to a Falun Gong practitioner, who explained the background of Falun Gong and the persecution.

Over 20 members of the group then lined up to have this practitioner record their declarations of withdrawal from Chinese communist organizations. The practitioner wished them well as they left, to which the tourists replied, “We are so glad we met you!” and “Thank you!”

As Chinese tourists learn about the current trend of practitioners suing Jiang Zemin, increasing numbers have openly shown support for Falun Gong and many are reexamining their understanding of the persecution.

A tourist from Beijing said, “The self-immolation was broadcast every half hour back then. We should ask Jiang Zemin why has it disappeared from the media. Because it is slander and lies. I didn't believe it even then [in 2001].”

He was referring to the staged self-immolation on Tiananmen Square during the Chinese New Year of 2001. On January 23, 2001, five individuals allegedly set themselves on fire in Tiananmen Square in Beijing. The entire scene was caught on camera from multiple angles. Beginning just hours after the event, state-controlled media was flooded with reports claiming that the self-immolators were Falun Gong practitioners. These reports included grisly footage of the victims and declared Falun Gong teachings to be directly responsible for the tragedy. Not long after the tragedy, the self-immolation was exposed as a hoax, conceived by the Communist regime to frame Falun Gong and turn public opinion against the peaceful cultivation practice.  (Self-Immolation Hoax on Tiananmen Square)

Before he boarded his bus, the tourist approached a practitioner again. “Please be persistent with your efforts! It's remarkable. We all support suing Jiang Zemin. We hope that you will bring him to court soon!” he said.

Another man took a flyer from a Falun Gong practitioner and said, “I'm still reserved on this topic of Falun Gong.”

“Have you thought about where your reservation comes from?” the practitioner asked. “Do you know that the self-immolation on Tiananmen Square was staged and a hoax?”

“Then why do you still hold reservations about Falun Gong?” the practitioner responded. “It seems that, unknowingly, you have been influenced by the Party's propaganda.”

The practitioner went on to explain that Jiang Zemin resented Falun Gong, a spiritual belief based on Chinese traditional culture of Buddhism and Taoism. Traditional Chinese belief holds that persecuting practitioners of upright spiritual practices constitutes a huge sin that is to be punished by Heaven. The persecution Jiang launched has dragged the entire Chinese population into the brutal and sinful communist “struggle,” which has caused thousands of confirmed deaths and millions of families to be torn apart.

When the practitioner suggested that all Chinese, including him, should sue Jiang Zemin, the man nodded and said, “I agree.” 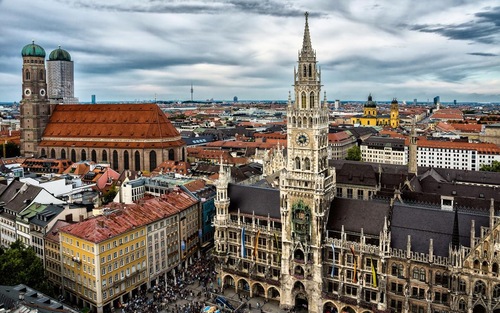 At tourist sites in Munich, Germany, Falun Gong practitioners play audio recordings for the large numbers of Chinese visitors. Many tourists smile or give a thumbs-up when they hear the announcement: “Dear fellow Chinese, the days of the Party are numbered!”

Many have shared with practitioners, “Everyone is cursing the Party in China.” Another tourist said, “We have been looking forward to this day [the Party's end]. We are happy to hear this!”

“USA: Idaho Newspaper Reports on Persecution of Falun Gong and Legal Efforts Against the Main Perpetrator”