“That adds up to 22 years of detention—that is what my family has suffered because of our belief in Falun Gong,” said Mr. Yu Ping, a graduate of Tsinghua University.

Mr. Yu spoke at the rally at the Chinese Consulate in Brisbane on June 25, 2015. Standing in front of banners held by Queensland practitioners, he and two other graduates of Tsinghua, a renowned university—each with a copy of his criminal complaint in hand—came to support the movement to sue Jiang Zemin for persecuting Falun Gong. 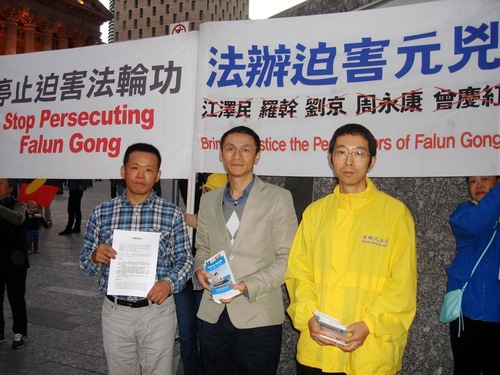 Tens of thousands of Chinese have recently filed criminal complaints against Jiang. According to information received by Minghui, more than 13,000 complaints were filed in the week of June 19-25 alone.

“Jiang Is Completely Responsible for the Atrocity”

Mr. Yu started to practice Falun Gong in January 1999 when he was a graduate student at Tsinghua. He received awards for academic excellence every year and published quite a few research papers. The practice of Falun Gong and the principles of Truthfulness-Compassion-Forbearance improved both his mind and body.

But the good times did not last long. He was detained twice for his belief, in prison from 2000 to 2004 and in a forced labor camp from 2008 to 2010. His personal property was confiscated and he was severely tortured—both physically and mentally. Guards once shocked him with six 150,000-volt electric batons for nearly an hour. He was forced to do hard labor, and the police continually harassed him after his release.

His family also suffered tremendously. “When both my wife and I were arrested in 2008, our 18-month-old daughter was traumatized by the incident. It was not until our release two years later that we learned from my father-in-law that our daughter could hardly sleep at night and often fretted during the day.

“Suing Jiang Zemin is critical because he launched the persecution of Falun Gong, one of the most brutal and vicious human rights violation in human history.”

According to an independent, third party investigation, tens of thousands of Falun Gong practitioners have become victims of live organ harvesting.

“Jiang is completely responsible for that atrocity,” Yu continued, “Bringing lawsuits against him will let the public know how severe the persecution is, so that more people will choose to support what is right. It also sends a signal to Jiang's followers not to continue on the path of no return, or they, too, will face serious legal consequences.”

Meng Jun, also from Tsinghua University, said that what happened at this prestigious university is clear evidence of the brutality of the suppression. Jiang once sent Li Lanqing, vice-premier of the State Council, to Tsinghuo to set up a branch of the 610 Office to implement his persecution policy. As a result, about 100 practitioners were detained on campus and more than 70 of them were sentenced to prison or sent to forced labor camps. Many died due to torture, and some became disabled or mentally disordered.

“Although the suppression has targeted Falun Gong practitioners, its deceitful propaganda has turned many Chinese against innocent practitioners. By opposing Truthfulness-Compassion-Forbearance, principles that align with traditional values and the common good, many people have done wrong. Jiang has undermined the moral foundation of the society.”

Due to the consistent efforts of practitioners and other kindhearted people, Meng said, this tragedy is gradually coming to an end. “About 10,000 criminal complaints have been filed against Jiang. As a the momentum builds and more lawsuits come in, the time will come when Jiang will have to pay for his crimes.”

Xie Weiguo, a senior research fellow at a institute in Australia, is also a graduate of Tsinghua University. “Because Jiang initiated the persecution of Falun Gong, he has committed crimes against humanity, torture, genocide, organ harvesting, illegal detention, and murder.

“That is why this movement to sue Jiang has become unstoppable. It will help restore the social conscience and bring about justice,” said Xie.