(Minghui.org) Falun Dafa practitioners and their supporters rallied in front of the Chinese Embassy on July 1, 2015, to show their support for the thousands of practitioners who have filed criminal complaints against Jiang Zemin, the former dictator of the communist regime responsible for initiating the persecution of Falun Dafa in 1999.

Six practitioners in Denmark have mailed their complaints to the Supreme People's Procuratorate of China. One of them has already received confirmation of delivery from the Denmark post office. 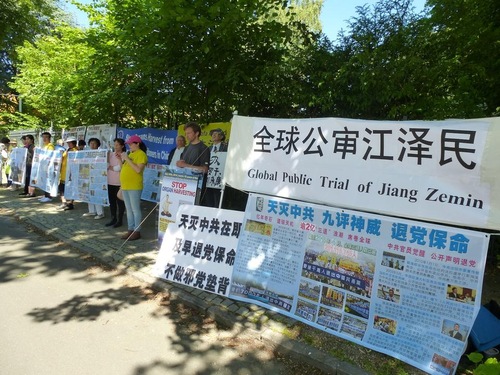 Wave of Lawsuits Against Jiang Zemin

Practitioners and their family members have filed 22,818 complaints against Jiang between since the end of May 2015, according to the Minghui website. Confirmation of delivery has been received for 10,972 complaints that were sent express mail.

Due to Communist China's Internet censorship and the difficulty of getting information out of the country, the actual number of lawsuits filed is much greater than the number of copies received by the website.

Lawsuits are not only being filed by practitioners in China, but also by 160 practitioners who escaped from China and are now living in 17 countries, including 6 from Denmark. The allegations included crimes against humanity, state-sanctioned organ trafficking, and torture. 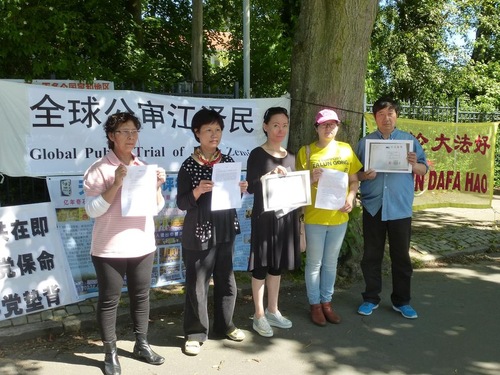 "These Lawsuits Are a Good Thing for China"

Ms. Wu, a representative of the Falun Dafa Association of Denmark, said at the rally, “Today, the Chinese are awakening. More than 208 million of them have quit the Chinese Communist Party and its affiliated organizations.

“Today, Falun Dafa practitioners in Denmark have come to the Chinese Embassy to tell world about the persecution we have personally endured over the past 16 years. In the pursuit of justice, we want to support and join the wave of lawsuits against Jiang Zemin.

“Jiang Zemin not only ordered the persecution of Falun Dafa in China, but also used diplomatic channels to spread lies about Falun Dafa and its founder, Mr. Li Hongzhi, throughout the world. The state-controlled media in China defamed Falun Dafa and instigate hatred for a group of people who practice Truthfulness-Compassion-Forbearance.

“For the past 16 years, every Falun Dafa practitioner has been both a victim and a witness to the persecution. Jiang Zemin and his accomplices have been persecuting all the Chinese people, not just practitioners.

“The wave of lawsuits against Jiang will save China if China abandons the communist regime. The lawsuits are a good thing for China and its people.” 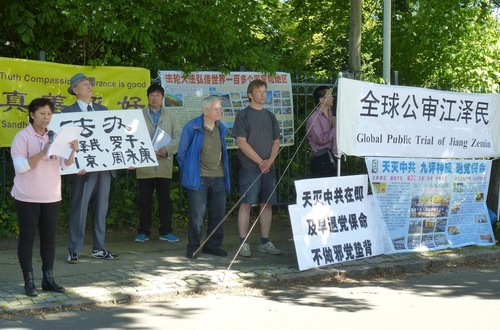 Falun Dafa practitioner Ms. Bao Xuezhen has mailed her complaint against Jiang Zemin to the Supreme People's Procuratorate of China in Beijing.

Ms. Bao Xuezhen, a former engineer of a state-owned plant, was incarcerated in Shanghai Women's Prison for 3 1/2 years for practicing Falun Dafa. The authorities ransacked her house twice and confiscated many of her family's personal belongings.

She was also fired from her job and lost all her pay and benefits. Her total financial loss exceeded two million yuan (about 350,000 USD).

The authorities continued to harass her, restricted her from traveling, tapped her phone, and put an around-the-clock surveillance on her family. 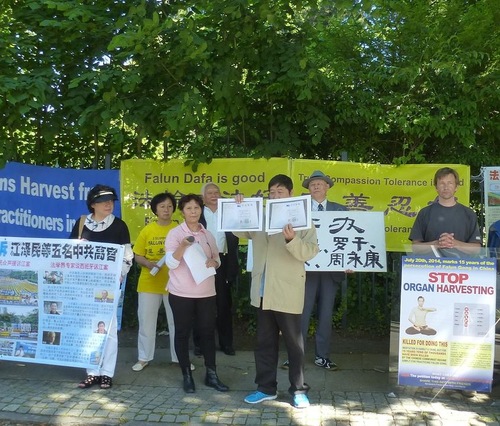 Mr. Zhu Xuezhi was a successful businessman with companies in Tianjin City, China, and in Denmark. In 2002, after he participated in a protest in Denmark against the persecution of Falun Dafa, the Chinese regime started to retaliate.

The authorities broke into his house in Tianjin and confiscated all his personal property, including cash, his car, collectible stamps, paintings, and calligraphy. The police did not give his family a formal receipt.

His three companies in Tianjin were forced to close.

Chinese officials then threatened his clients in Denmark to sever business relations with him, eventually forcing him out of business in Denmark, too.

His and his wife's relatives in China were harassed and threatened, and some of them lost their jobs.

The Chinese embassy refused to extend his passport in 2003 because of his practicing Falun Dafa.

The persecution turned a successful businessman into a refugee in Denmark. 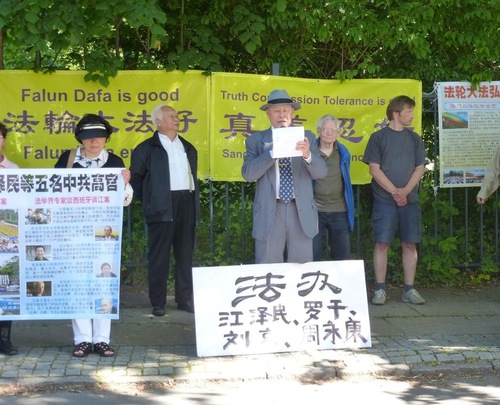 “Another friend, who is a deputy president of a large hospital in China, told me that there were more than 2000 organ transplant surgeries every year in his hospital. The sources for most of those organs, which didn't have a name or address, just a number from the 610 Office, were Falun Dafa practitioners.” 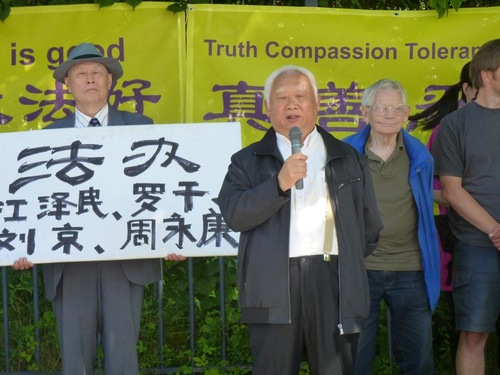 Many passersby, local residents, and Chinese tourists expressed their support and sympathy.

“Former Mayor of Kiev, Ukraine: “Communism Is a Disease””