Melbourne, Australia: Calling for an End to the Brutal Persecution, Now 16 Years Long

(Minghui.org) “I was shocked to hear that in this day and age a government in one of the most powerful nations on earth is killing their own people to generate profit in a growing organ transplant industry,” said Nick Hughes, a sales manager, while watching Falun Gong practitioners march past on July 18, 2015 in downtown Melbourne.

Falun Gong practitioners held a procession, wall of banners, and candlelight vigil from July 18 to 20 in Melbourne to call attention to the persecution of Falun Gong in China which began exactly 16 years ago, on July 20, 1999.

Since the onset of the persecution, the deaths of over 3800 practitioners due to torture have been confirmed. The actual toll is believed to be much higher, but has yet to be confirmed due to intensive censorship in China where the persecution continues.

Nick drove nearly an hour to see the march. He said, “Wow, the parade looks amazing. The uniforms and signs look fantastic. Loved the fact they had drums also.” 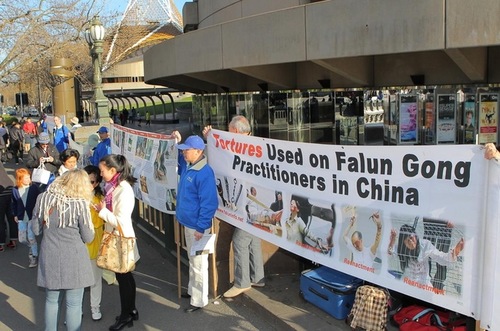 A supporter named Mr. Federer said he watched the documentary film Human Harvest: China's Organ Trafficking on SBS TV. “It is not something that you think could happen,” he said. “To see Falun Gong practitioners here today, at least I can sign the petition to put an end to the live organ harvesting. Enough is enough. Something must be done.”

His girlfriend, Ms. Wojczuk, was moved to tears while talking about the persecution. “No matter where you are in the world, we should respect each other. We are like a global family. When I hear what Chinese government is doing to my global family, it is hard to accept. It is heart breaking,” she said.

Mr. Mnaz, a graphic designer, said that he had heard of live organ harvesting. “It is against humanity. It is totally unacceptable. I am shocked. I am speechless. It should stop immediately!” he said.

He praised the Falun Gong events, and said, “You are doing a great job. One day the persecution will end and there will be justice. As long as you fight for it, you will reach the goal.”

Richie, a lawyer, said, “It is important for people to know about the persecution. The Australian government should say something to the Chinese government. The persecution is a serious human rights abuse.”

A mother and daughter stood for a long time in front of the banners. The daughter, Natasha, is a teacher. “I first learned about it from another protest a few years ago,” she said. “I spoke to someone who gave me some information and told me I could learn more on the Internet. So I read a lot of articles and found that the persecution is unbelievable! Recently I read a report about the live organ harvesting on ABC. It is horrible and must be stopped.”

Brett Ludeman, who owns a film company, participated in the candlelight vigil. He said, “I heard about the persecution of Falun Gong and forced organ harvesting about two years ago. Since that time, I have hoped to show the Australian people what is happening in China. I can feel the pain of the people who suffer the torture and killing for organs. More people should be aware of it.”

“A Couple Is Rewarded for Refusing to Betray Their Conscience”