(Minghui.org) Australia is the smallest continent, and is isolated from the rest the world. But citizens there cherish freedom of belief and protection of basic human rights.

Four events were held during the past few days to mark the 16th anniversary of China's persecution of Falun Gong. Three were at state capitals of Australia on July 18, 2015, and one was in New Zealand on July 16. 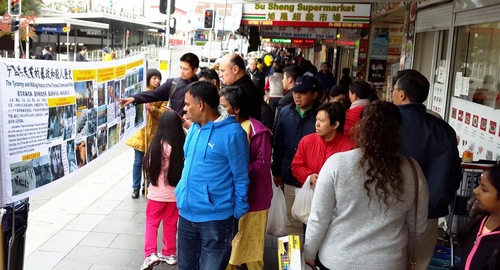 Passersby read the posters to learn facts about the persecution.

Practitioners in New South Wales held an event in downtown Auburn, a suburban city of Sydney, on July 18, to inform people about the persecution of Falun Gong in China. Four Falun Gong practitioners gave speeches and explained why they filed criminal complaints against Jiang Zemin, the former head of the Chinese communist regime.

Rally on July 18 in downtown Auburn, a suburban city of Sydney.

Mr. Liu Jintao: Tortured for Wanting to be a Good Person

Mr. Liu Jintao was arrested in 2006 when he was pursuing a Masters degree at the China University of Petroleum in Beijing. He was first taken to a brainwashing center, then transferred to a detention center, and lastly sentenced to forced labor at the Tuanhe Forced Labor Camp.

“I was tortured at the Tuanhe Forced Labor Camp,” said Mr. Liu. “One guard ordered four inmates to beat me, and shock me with electric batons at the same time. Drug addicts pulled off my clothes, inserted a toilet brush handle into my anus and played with my penis to humiliate me.”

In addition, his back was burned with heating pipes. He was kept outside on freezing winter days wearing no clothing, while they poured cold water over his body.

“Guards also forced me to sit on a small stool without moving, without sleeping, and with no access to the toilet,” he said. “They deprived me of food and called it a 'hunger strike'. Then, they force-fed me.”

“I am standing here today because Jiang and his followers need to be held responsible for all the atrocities they committed,” said Mr. Liu.

Abi Shalla: Broke Out In Tears 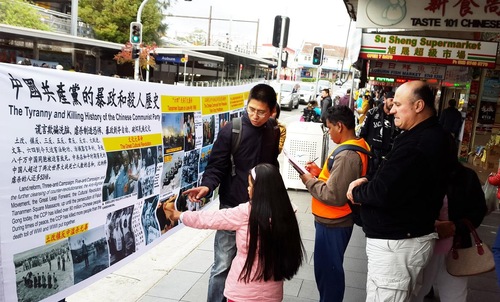 Abi Shalla, a poet, was moved to tears by practitioners' courage when facing the brutality.

Abi Shalla, a poet, learned about the persecution from the posters and listening to practitioners.

The torture methods, especially organ harvesting from living practitioners, brought tears to his eyes. He then helped explain the atrocities committed by the Chinese communist minions to other passersby.

Upon hearing that more than 80,000 criminal complaints had been filed against Jiang for persecuting Falun Gong, Shalla said that this was the right thing to do.

“Leaders from all countries have to pay attention to this, because this is genocide, something similar to what Hitler did to the Jews,” he said.

Anthony Misaf: Persecutors Must be Brought to Justice 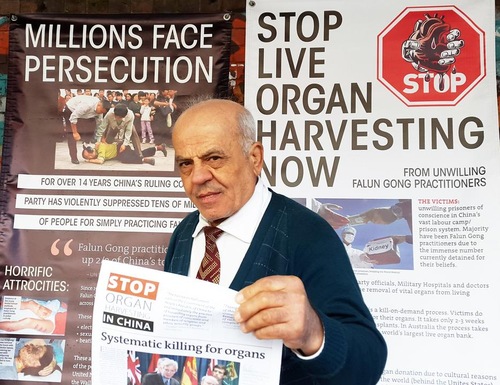 Anthony Misaf said that those who persecuted Falun Gong should be brought to justice.

Anthony Misaf read the posters, and was shocked by the brutality committed by the Chinese communist minions. He signed a petition which called for an end to the persecution.

“No one should do such a bad thing [persecuting practitioners], even for power or money,” said Misaf.

When he was told that the persecution has been ongoing for 16 years, he was in shock.

“How could they [key perpetrators] get away with this? They acted liked Satan when killing people. They should be brought to justice.” 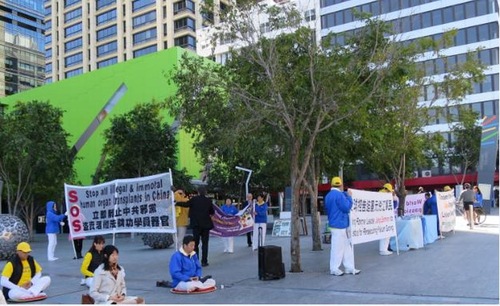 Practitioners calling for awareness about the persecution at Brisbane Square

Queensland practitioners put up posters at three locations, Brisbane Square, Chinatown, and the Sunnybank touring site, on July 18, to tell the community how Falun Gong was persecuted in China.

Daniel: Will Tell More People About the Persecution 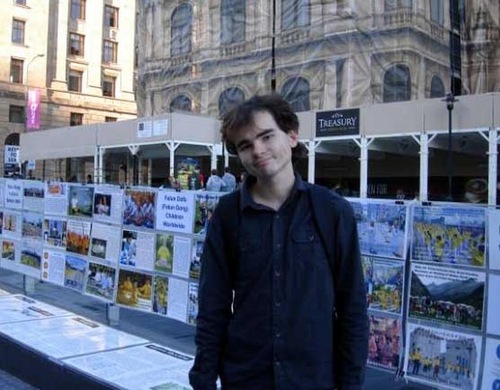 Daniel, a student, said he would tell more people about this atrocity.

Curious about the posters, young student Daniel read every poster from beginning to end, and asked many questions.

He wanted to know about Falun Gong and why the Chinese communists tortured practitioners. After one practitioner answered his questions and explained the situation in China, he was shocked, “I didn't know a government would go that far and persecute good people!” He signed a petition calling for an end to the persecution, and promised to tell more people about it. 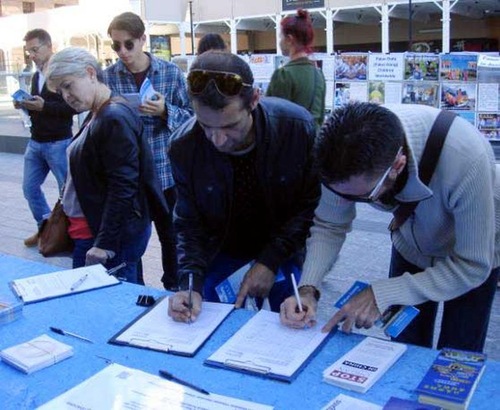 Many people signed petitions to support ending the persecution.

A woman in a wheelchair also stopped for more information. When she heard about the organ harvesting from living practitioners in China, she was deeply shocked, and said, “This is horrible! We must stop it, right now.” She then signed a petition calling for an end to the brutality. 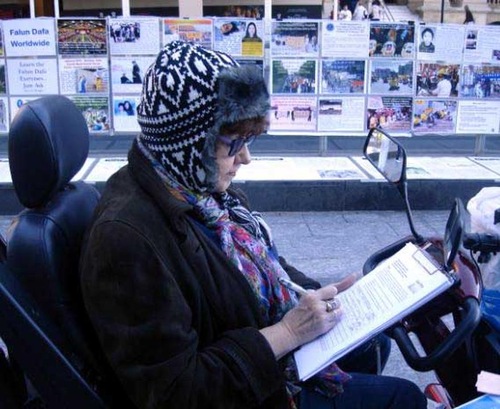 A woman in a wheelchair signs a petition to oppose the suppression. 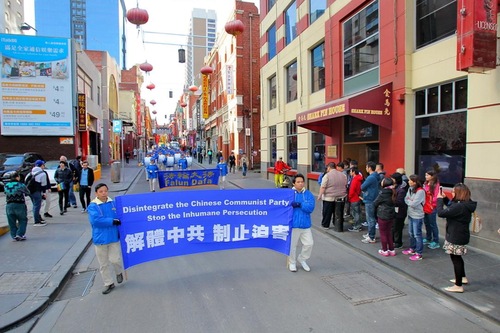 Practitioners in Victoria, a state in the south-eastern part of Australia, held a march in downtown Melbourne on July 18.

Heading the march was the Divine Land Marching Band, followed by banners that said, “Falun Dafa Is Great,” “Stop Persecuting Faun Gong,” and “Support the Lawsuits Against Jiang.”

From the starting point at the State Library of Victoria, the procession moved through the business center and Chinatown, and ended at Victoria Park. It drew a large number of spectators, many of whom were shocked upon hearing about the 16-year-long severe suppression. 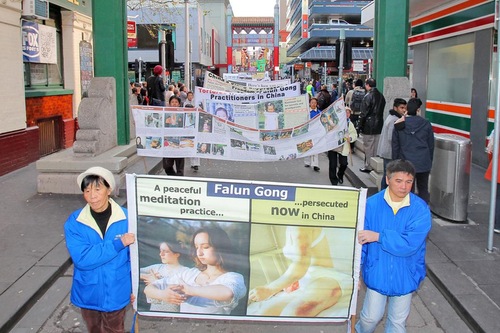 A poster illustrating the peaceful meditation and the brutal persecution.

People Shocked Upon Hearing About Persecution

Peter Westmore, president of the National Civic Council and a long time supporter of Falun Gong, spoke at the event. He pointed out that the torture has not abated yet, and the public must be made aware of that.

Bruce and his two daughters, Amelia and Rebecca, came from 200 miles away.

“We've never seen such a march before. Very impressive and touching,” said Amelia. “This band [the Divine Land Marching Band] is excellent! Plus it is all about freedom of belief, something we should all cherish.”

Having watched SBS One's coverage on live organ harvesting, Bruce said that the documentary sent a strong message to everyone.

“We were impressed by practitioners' courage,” he said. “Meanwhile, atrocities like organ harvesting from living practitioners violate human rights and basic moral principles. We must stop it.” 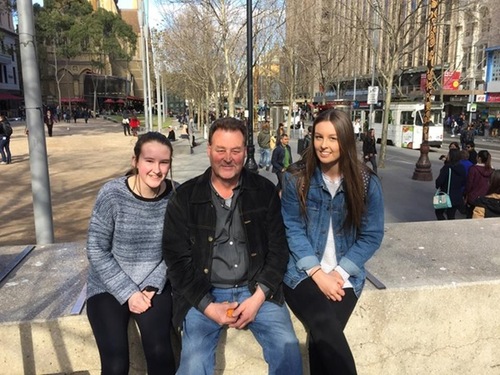 Bruce and his two daughters said they support practitioners.

Franic, a retired teacher, was impressed by the band. She has a strong interest in Chinese culture, and said that the Chinese communist regime should not brainwash people's minds, so they can control them.

“It is good to see a march like this today,” she said. “I will write letters to our government because officials need to do their part.”

Located about 2,500 miles southeast of Australia, New Zealand is also in the Southern Hemisphere.

Practitioners held a march on July 16 in New Zealand's capital, Wellington, followed by a rally outside the capitol. Internet news media Scoop reported on the activities.

More than 50 of New Zealand's residents filed criminal complaints against Jiang for persecuting Falun Gong. These documents were sent to Beijing's Supreme People's Court and Supreme People's Procuratorate in China.

According to information published by the Minghui website, more than 80,000 practitioners from inside and outside of China filed lawsuits between early May and mid-July this year.

Practitioners have been tortured for their beliefs, which includes beatings, sleep deprivation, shocking with electric batons, and forced labor. 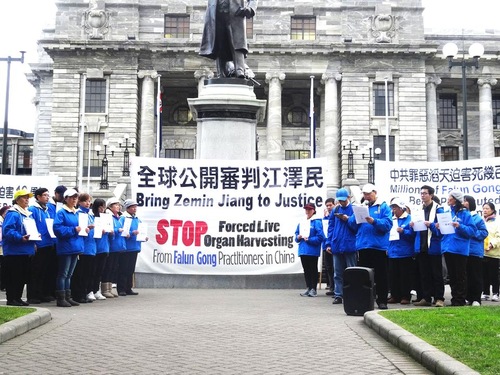 Practitioners in New Zealand support the lawsuits against Jiang during a rally on July 16.

Not only were practitioners tortured while in Chinese custody, their health condition was ignored, and some had blood samples taken for possible organ harvesting.

“The blood test did not make sense to us back then,” said a practitioner at the rally. “Why did officials order this test while ignoring our life? It was not until after I was released and read reports about organ harvesting from living practitioners did I make the connection. They wanted the organs and did not care about us.”

She added, “Fortunately I was able to survive—but many others were not so lucky. And now we have to speak for them.”