(Minghui.org) Multiple Falun Gong practitioners in Perth, Western Australia have filed criminal complaints with China's highest courts against former communist dictator Jiang Zemin. They had been tortured in China for their beliefs. An additional 20 practitioners mailed letters to the Supreme People's Procuratorate to expose Jiang's crimes.

These cases, mailed from Perth, are the latest addition to the total of 22,818 plaintiffs and 18,244 cases filed between late May and June 25, 2015. Falun Gong practitioners held events in Perth's city center and Chinatown to inform the general public about the new waves of lawsuits against Jiang Zemin in China.

In 1999, Jiang, as head of the Chinese Communist Party, overrode other Politburo standing committee members and launched the violent suppression of Falun Gong.

Locals expressed support for the practitioners' efforts to bring the former dictator to justice. After learning about the trend in China and the reason for the nearly 20,000 criminal complaints, Georgia Starcevich said, “They [practitioners] should do that [in China]. Everywhere else should do that.” She encouraged practitioners to continue doing what's right, despite the government wrongdoings. 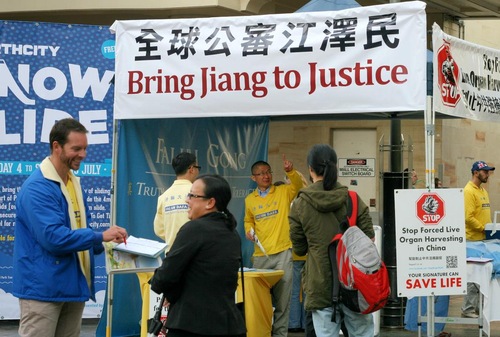 The plaintiffs from Perth include Sheng Zhengping (盛正平), a former engineer with the Wuhan Iron & Steel Design and Research General Institute in Hebei Province, Zhang Xiuping (张秀萍), a former State-Owned Enterprise employee, and Luo Shengchun (罗声春), a former employee with the Wuhan Bureau of Press and Publication.

Ms. Zhang was arrested three times and detained at brainwashing centers and detention centers. Her workplace withheld and suspended her salary due to her belief.

She stated that she was seeking justice from the chief perpetrator who began the 16-year-long persecution that tore apart many families and led to large number of deaths.

She considered the filing of criminal complaints similar to the peaceful protest on Tiananmen Square years ago. They serve the same purpose – to stand up for Falun Gong and seek redress for injustice.

“The waves of lawsuits against Jiang Zemin offers the Chinese citizens who have been influenced by propaganda lies, another opportunity to learn the facts of the persecution. Thus, they can join the efforts to end the persecution together,” Ms. Zhang added.