(Minghui.org) Eleven young practitioners in New Zealand, ranging in age from 7 to 18, attended a five-day winter camp from July 6 to 10.

Every morning, the young practitioners went to the Chinese embassy to send forth righteous thoughts, do the exercises, and protest the persecution. In the afternoons, they practiced their instruments to perform with the Divine Land Marching Band. And every night, they studied the Fa together and shared cultivation experiences. 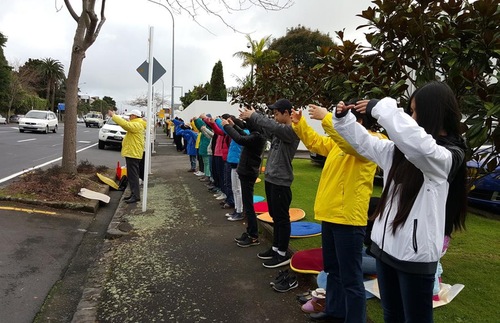 Doing the exercises in front of the Chinese embassy 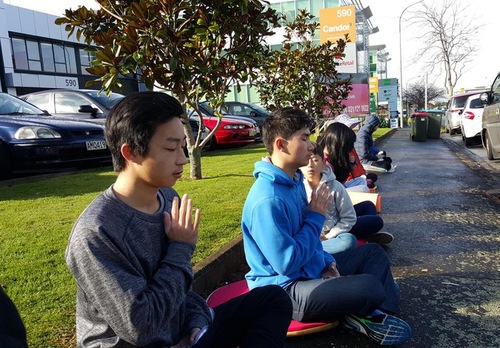 Sending forth righteous thoughts in front of the embassy 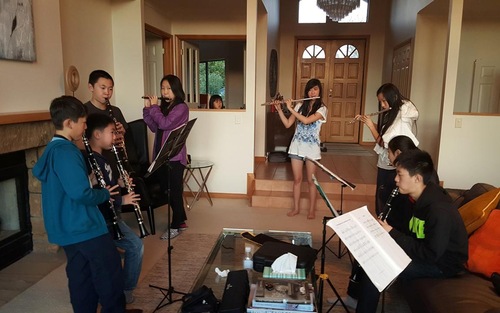 Practicing to perform in the Divine Land Marching Band

On the last day, David, 18, shared his understanding of respecting Master and the Fa. He believes that calmly reading the Fa and doing the exercises are manifestations of that respect.

David said that his mother, also a practitioner, has been rigorous in helping him to form the routine of reading the Fa and doing the exercises every day.

He mentioned that he was addicted to video games a few years ago, but, with his mother's help, he quit. “After I got rid of the attachment to video games, I found that playing those things is actually not fun.”

Seven-year-old Lele loved camp. “It made me happy to be with fellow practitioners,” he said. When he did the standing exercises with the group for the first time, he held his arms up for all 30 minutes of the second exercise. His spirit touched and encouraged other young practitioners.

Lele has already learned a lot of Chinese words compared to his peers. He can read almost all of Zhuan Falun without any help. Some of the young practitioners who were born in New Zealand and cannot speak much Chinese were amazed.

Xiaoxiao, 11, said that she read the Fa more at camp than at home. “I also did the exercises more. Sometimes I got tired. But when I saw the other kids doing the exercises so diligently, I was able to keep it up until the end,” she said.

Fellow practitioners praised 15-year-old Yutong for helping to cook and clean. “She really cares about others and is really selfless. Putting others first is something a cultivator should do,” once young child said.

Kevin, 12, said that cultivating Dafa makes him calm. “Sometimes at school, other kids bully me. But I always keep in mind that I am a cultivator, and this helps me to forbear and keep from having conflicts with them.”

“Over 80,000 File Charges Against Jiang Zemin Despite Difficulties”