(Minghui.org) Today's news from China includes incidents of persecution that took place in 15 cities or counties in 8 provinces. According to this report, 21 Falun Gong practitioners were subjected to mistreatment during their detention, and at least 12 practitioners were illegally arrested. 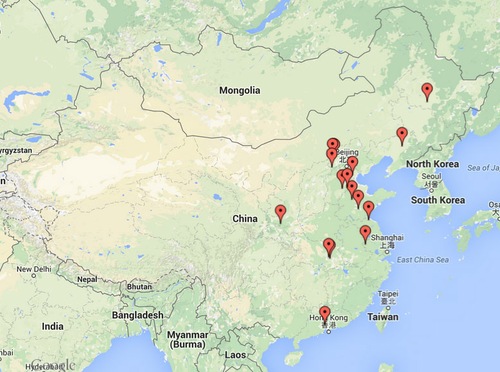 As of June 25, 2015, 108 practitioners in Dongguang County have filed criminal lawsuits against Jiang Zemin, former head of the Chinese Communist Party (CCP), with the National Supreme Procuratorate and the Supreme Court. The practitioners inquired online to get their receipts. Some received acknowledgements via text messages on their cell phones.

Officers from the Qiaoxi Police Department broke into Mr. Liu Ying's home and arrested her on the afternoon of June 25, 2015. She is being held in the Shisanli Detention Center.

Mr. Wu Qiulai and his wife Ms. Liu Guojing were arrested by officers from the Quantou Police Station and Wuyi Domestic Security Division when the couple were distributing Falun Gong (also known as Falun Dafa) informational materials in Xiaoguozhuang Village, Quantou Township, on the morning of June 27, 2015.

The couple was taken to the police station. The domestic security officers ransacked their home that afternoon. They confiscated a set of Falun Dafa lectures and several DVDs with Falun Gong information. The two were released that afternoon.

The police officers broke into Ms. Luan Lihua's home in the Sujiatun District on June 25, 2015. They arrested her and her sister, Ms. Luan Lijie, who happened to be there. The officers confiscated a computer, a large number of Falun Dafa books, and Falun Gong informational packets. They even changed the door lock and affixed a notice with an official seal to the door.

Ms. Luan Lihua's husband, who does not practice, was unable to enter his home. Her sister's home was also ransacked. The police confiscated a computer and a large number of Falun Dafa books and informational packets.

Ms. Dong Xianxiang, a former employee of the Mengyin Fertilizer Plant, was arrested when she was putting up Falun Gong informational stickers on June 26, 2015. Her home was ransacked that evening.

Ms. Chen Qiuyu was arrested at home on the evening of June 24, 2015. She was taken to the Jinan City Detention Center next day. The officers ransacked her home and confiscated two computers, one DVD burner, and eight cell phones.

Ms. Zhang Yuanyuan from the Yaoludi area in the Hanyang District was arrested at home around June 17, 2015. Her whereabouts is unknown.

Mr. Wang Guiming was taken from his home by four officers from the Hongqilou Police Station on the morning of June 28, 2015. The officers confiscated Falun Dafa books and a photo of the Falun Gong founder.

Seven officers from the county Domestic Security Division and the Daiwangcheng Town Police Station broke into a wedding photo studio owned by Mr. Li Jinjun and ransacked the place. Mr. Li was arrested. Later, the officers searched his home and confiscated a notebook computer. Mr. Li's wife video recorded the search. The officer confiscated her video recorder and took her with them to the police station. Mr. Li was taken to the county detention center that evening. His family received a notification that Mr. Li had been placed in criminal detention.

Ms. Yan Chunmei, employed with the Dongxihu District Textile Factory, was taken to a detention center on June 4, 2015. She was transferred to the Wuhan City No. 1 Detention Center on June 17.

Mr. Yan Xiangbao's family from the Dagang District went to the Gangbei Police Station to ask the police to return Mr. Yan's bicycle and cell phone on the morning of June 27, 2015. The officers refused to admit that they took the bicycle. They drove Mr. Yan's family away from the police station.

Ms. Yan Jinhe and two other practitioners were followed and arrested by plainclothes officers from the 610 Office when they were putting “Falun Dafa Is Good!” stickers on May 13, 2015. Ms. Yan is still being held in the city detention center.

Mr. Li Chunqing from Harbin was doing business in Beijing when he was arrested. He was sentenced to five years in prison.

One and a half years into his term, Mr. Li suffered a stroke as a result of abuse. Half of his body became paralyzed after surgery. He also suffered from loss of speech. Prison authorities told his family to take Mr. Li home on medical parole. His prison term ended on June 13, 2015.

Officers from the Zhouzhi Police Department and the Domestic Security Division ransacked Mr. Zhao Yingjun's home in Zhujiacha Village, Situn Township on April 21, 2015. They confiscated a printer, a computer, and other items. Mr. Zhao's wife Ms. Xu Xiue was taken to the Zhouzhi County Detention Center that day.

Mr. Zhao was forced to leave home for over a month. He went to Fujian Province to work odd jobs. He was arrested at the local airport and taken back to Zhouzhi County. He is being held in the Zhouzhi County Detention Center.

Kong Jie, head of the Domestic Security Division, and other officers pried open the door of Mr. Zhong Chongbin's home and ransacked it that night.

Some of the practitioners who were released that afternoon have returned home. Mr. Zhong Chongbin and Ms. Yuan Chunli were taken to the Lianyungang City Detention Center on the afternoon of June 13, 2015.

“Our Truth-Clarification Efforts Over a 10-Mile Radius”