(Minghui.org) French Falun Gong practitioners gathered at Human Rights Square in Paris for a public event on May 31, 2015. Doing the exercises together and displaying posters by the Eiffel Tower, they told passersby about Falun Gong and how the Chinese Communist Party has persecuted it for the last 16 years. 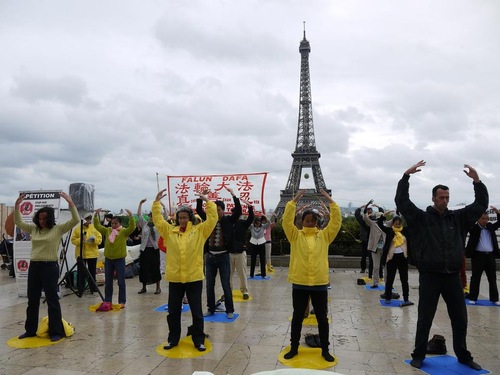 Falun Gong practitioners doing the exercises in Paris on May 31, 2015.

Surprised to learn that such brutality is taking place in China, especially organ harvesting from living practitioners, many pedestrians stopped to get more information and signed petitions calling for an end to the suppression.

Among them were local residents Jacques Klein and his wife. “We cannot tolerate such a tragedy, regardless of where it happens in this word,” commented Mr. Klein. They also signed the petition for their son and cousins after confirming with them. 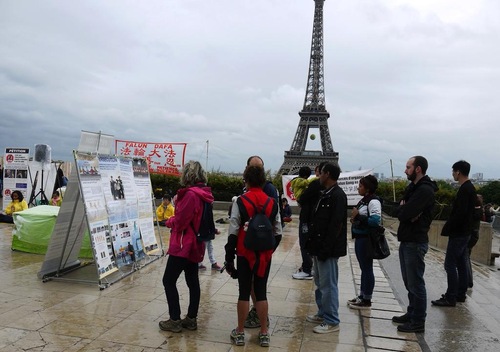 Tourists and residents stopped by to learn about Falun Gong and the persecution in China.

Tashi, a Tibetan currently living in Paris, said the Chinese Communist Party hate propaganda, including the staged Tiananmen Square self-immolation incident, also spread to Tibet. “Many Tibetans believed these defamatory lies and had a negative impression of Falun Gong.” A large number of monks, however, knew Buddha School teachings and were not deceived by such propaganda.

Because Tashi taught his students the real history of Tibet, he was mistreated by officials, which led to his exile to Paris. He later met with a Falun Gong practitioner and learned about the self-improvement spiritual system.

“I am so happy to see so many practitioners here today. Your meditation is peaceful and your efforts are courageous.” said Tashi. 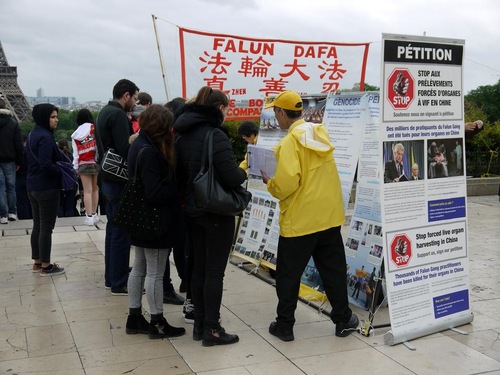 A practitioner explaining live organ harvesting in China to passersby.

“It Is Not Complicated to Sue Jiang”