The complaints charge Jiang with unlawful imprisonment, depriving citizens of their constitutional right of freedom of belief, and abuse of power, among other crimes. The practitioners seek both criminal prosecution of the former dictator and compensation for economic losses.

Jiang initiated the persecution of Falun Gong on July 20, 1999, and created an extralegal agency (the 610 Office) with power to override police and judicial organs in carrying out his directive. During the past 16 years, more than 3800 Falun Gong practitioners have been confirmed tortured to death. The actual toll is likely higher, because such information is tightly censored in China.

The number of plaintiffs increased from 232 at the end of May to 394 on June 1 and 539 on June 2, and reached 868 on June 5. The number is expected to increase. So far, complaints have been filed in 27 of the 31 provinces and municipalities in China, with the highest number, 209, from Hebei Province.

The plaintiffs come from all walks of life, including businessmen, teachers, engineers, workers, farmers, doctors, government officials, and military officials. The youngest is 19-year old Nie Weijian from Jilin Province, and the oldest is 93-year old Xie Shumei from Shandong Province. 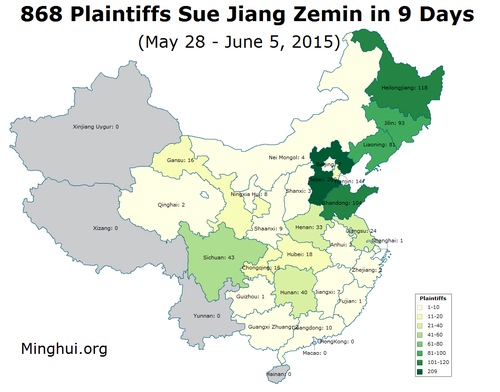 Between May 28 and June 5, 868 plaintiffs from 27 provinces and municipalities filed criminal complaints against former dictator Jiang Zemin.

Some of the plaintiffs' family members were tortured to death, and some were paralyzed as a result of torture. The indictments detailed the illegal arrests, forced labor sentences, and appalling conditions under which Falun Gong practitioners were imprisoned, tortured, and had money and property extorted from them. Some practitioners' employers had been pressured by local authorities to fire them, rendering the practitioners unable to provide for themselves and their families.

Among 324 plaintiffs who sent their complaints to the Minghui website between June 3 and June 5:

In Qingdao, Falun Gong practitioner Ms. Han Zhengmei and six of her family members have been persecuted in one way or another since 1999. Her husband Mr. Liu Hongji was tortured to death for practicing Falun Gong. Her oldest daughter Ms. Liu Xiuzhen has been imprisoned twice for practicing and is still serving her second prison term. Her grandson Mr. Yang Naijian is serving six years in Jinan Prison. Her middle daughter Ms.Liu Xiufang was confined to a mental hospital. Her son-in-law Mr. Yuan Shaohua was imprisoned for four years for practicing Falun Gong.

Ms. Ren Shirong from Jilin, Jilin Province, wrote in her complaint, “My husband was sent to Shuangxilong Forced Labor Camp and tortured. Five guards shocked him with electric batons in sensitive areas, including his mouth, head, chest, and lower body. They beat him with rubber batons, bruising him all over. His blood pressure exceeded 200 mmHg systolic.”

Mr. Wang Zhihai from Pingchang, Sichuan Province, stated, “I was jailed several times in brainwashing centers, forced labor camps, and detention centers for a total of four years. My wife Duan Shiqiong was imprisoned and tortured, resulting in her death from multiple organ failure. We have not been able to secure her remains these past 12 years. The Domestic Security Division police just harass us.”

Mr. Huang Huajie from Guangdong used to work in the the Bureau of Land and Resources in Guangdong Province. He was sent to Sanshui Forced Labor Camp on January 15, 2002, for two years. In November 2004, he was sentenced to six years in Meizhou Prison, where he was brutally beaten and tortured. One beating caused bleeding in his head. In another incident, he had to have eight stitches in his head. He was also shocked with electric batons, injected with unknown drugs, and deprived of sleep.

Mr. Wang Yuefa, a Falun Gong practitioner from Chengdu in Sichuan Province, was sent repeatedly to brainwashing sessions and fired from his job as associate manager of a repair shop for China Railway Group. He was sentenced to 10 years in prison and later two years in a forced labor camp, where his health deteriorated. Because Wang and his wife were imprisoned for so long that their family had no income, their daughter suffered a very difficult childhood. Mr. Wang's mother-in-law passed away in misery. Their direct financial losses as a result of the persecution is approximately 300,000 yuan (~$48,300 USD).

Ms. Tang Rong, a schoolteacher from Chongqing in China's northeast, was sent to a forced labor camp for three years for practicing Falun Gong. Aside from being forced to do slave labor in the camp, guards and inmates verbally and physically abused her. They forced her to stand, and sometimes jog, for extended periods of time. They deprived her of sleep for days. After her release, her school wouldn't take her back. She has no income and cannot get a job, because her identification card issued by the government has been confiscated.

Most plaintiffs described in their complaints how they have benefited physically and mentally from practicing Falun Gong.

For example, 43-year Ma Zhongbo from Binxian County in Heilongjiang Province wrote, “After I developed severe femoral head necrosis in 1998, my family had to sell our home to pay my medical bills. Despite the treatment, my situation deteriorated until I was only able to crawl.

“The pain in my bones caused many sleepless nights. Worse yet, the pain was not only present in my legs, but also affected my arms and torso. I couldn't hold anything and even needed help to eat and drink. It was hard for me to believe that I would be disabled in my 20s.

“During the Chinese New Year in 1999, my 80-year-old grandma told me, 'Come and practice Falun Gong with me. It's miraculous.' She also gave me a copy of the book Zhuan Falun.”

“I finished reading Zhuan Falun in two days and joined a group doing the Falun Gong exercises near my grandmother's house. Four days after I started practicing, I was able to walk. I laughed and yelled, 'I'm all right! I don't hurt. I'm fine!' All of my family staying at my grandma's were shocked. I heard them say, 'Is this possible? Are we dreaming?'”

However, Ms. Ma, whose life was renewed by Falun Gong, was badly tortured during the persecution. She was sent to Wanjia Forced Labor Camp in 2000, where she was beaten, hung up, and deprived of sleep for nine days. She ended up with festering sores on her legs and feet.