India: Falun Dafa at the Amdabad Book Fair Third Year in a Row

(Minghui.org) Seven hours by train from Mumbai in Western India is Ahmedabad, also known as Amdabad, the sixth largest city and commercial hub of the state of Gujarat. For the third year in a row, Falun Dafa practitioners had a booth at one of the biggest and most prestigious book fairs in India.

Practitioners from Mumbai, Pune, and Gurgaon participated in the fair from May 1-7, 2015. It is one of the few book fairs in India held in a centrally air-conditioned convention hall. That means it drew many people wanting to escape the raging heat outside for a couple of hours. Practitioners had a wonderful opportunity to reach out to them.

Many who visited the Falun Dafa booth said that they had purchased the Dafa books in previous years, and some recalled the beautiful lotus flowers they had taken home and showed renewed interest in learning the Dafa exercises.

Large numbers of people gathered to see the exercise demonstration and to learn the exercises. People from adjoining booths were curious to find out why so many people visited the Falun Dafa booth. 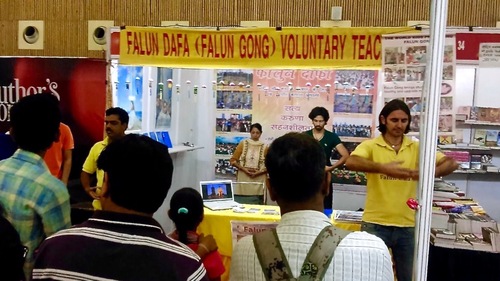 Throughout the week-long fair and for a few days afterwards, practitioners invited those who were keen to learn the exercises to meet at a park every morning from 7:00-9:00 a.m. Many were enthusiastic about continuing with the exercises and said they would network among themselves to do Fa study together. 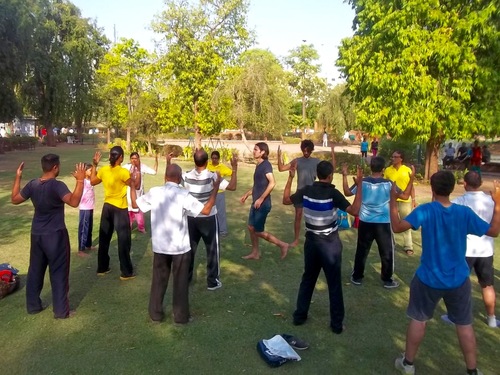 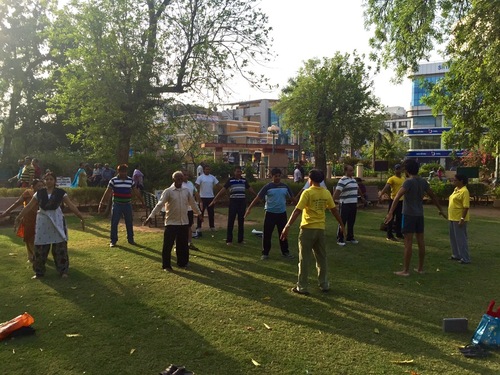 An elderly gentleman who was a regular at the park in the mornings had to be convinced that the activities were voluntary and free of charge. He then said, “You are doing such a noble thing--your master must be great.”

A practitioner from Mumbai will return to Amdabad for four to five days every month to set up a group exercise site and group Fa study.