(Minghui.org) More than 8,000 Falun Dafa practitioners gathered in Manhattan, New York on May 15, 2015, for a grand parade to celebrate the 23rd anniversary of Falun Dafa's (also known as Falun Gong) public introduction. They also called for stopping the persecution of Falun Dafa in China and for supporting the Chinese people who have quit the Chinese Communist Party (CCP) and its affiliated organizations.

The parade consisted of three processions with the themes Falun Dafa is great, stop the persecution of Falun Dafa, and support for the 200 million Chinese people who have quit the CCP and its affiliated organizations. The parade started at the plaza in front of the UN, passed by 42nd Street and Times Square, and ended at the Chinese Consulate. 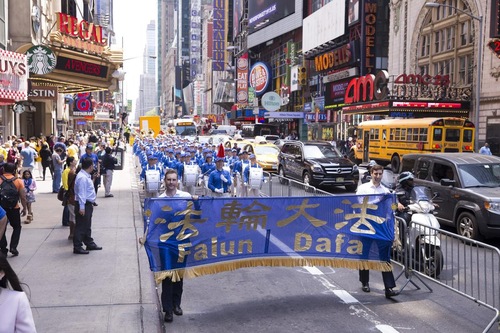 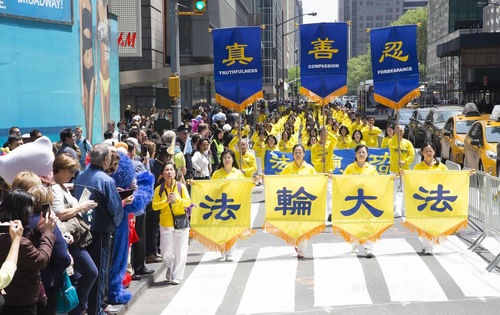 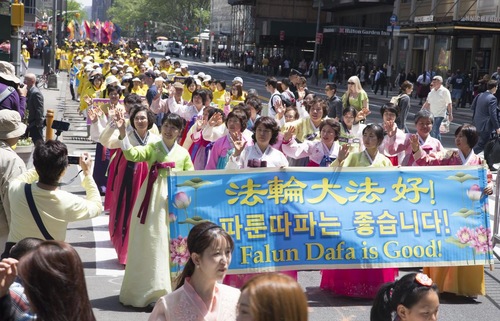 A group of practitioners wear ethnic dress of their home country in the parade. 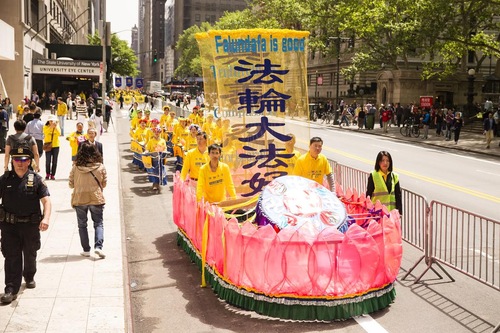 Float with a banner reading: Falun Dafa is Good. 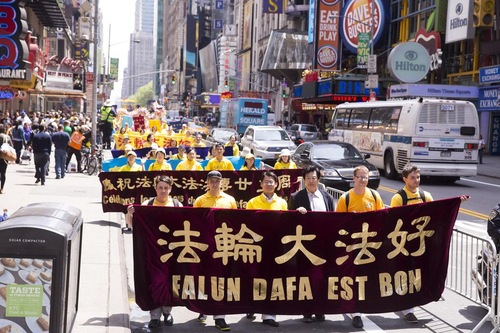 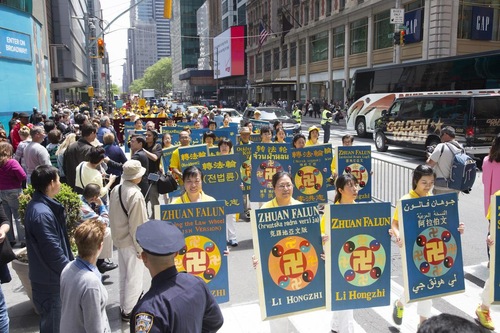 Practitioners hold banners showing the main Falun Dafa book, Zhuan Falun, which has been published in many languages. 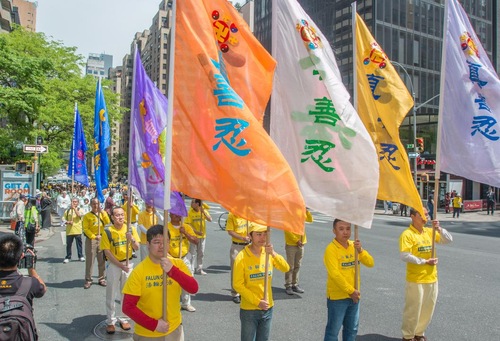 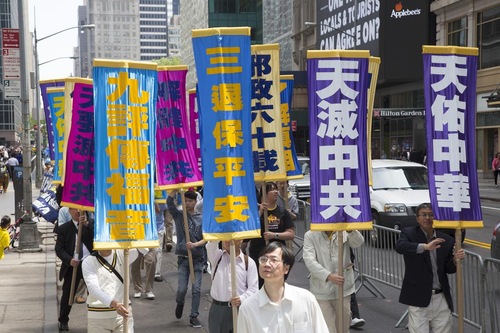 The banners in the front row read (from left to right): The Nine Commentaries Spread Good Fortune; Quit the CCP for a Safe Future; Heaven Will Disintegrate the CCP; and Heaven Protects China.

“Beautiful!” commended Ms. Jamila, who is from Monaco, and an officer for a UN organization, “Spreading the facts is important. I share your principles of Truthfulness-Compassion-Forbearance in my inner heart.”

After learning about the persecution of Falun Dafa in China, she added, “I hope you continue your efforts to continue the protest. You are doing great.” 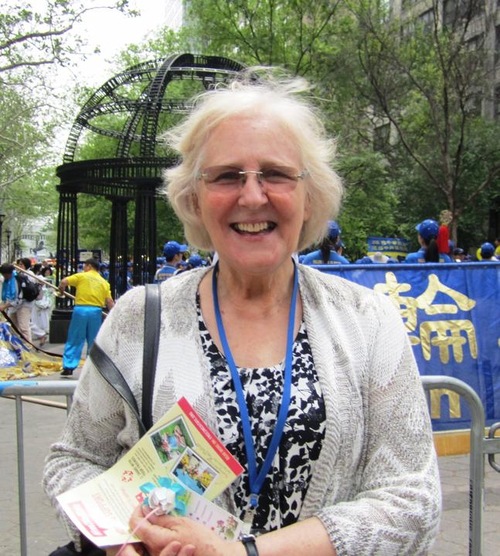 “Persecution brings suffering to everyone. Persecution of a group because of different ideology should not occur anywhere in the world,” said Cecilia O’Dwyer, Institute of the Blessed Virgin Mary representative at the UN. She said that she hadn't heard much about the plight of Falun Gong in China. She believes that Truthfulness-Compassion-Forbearance is a graceful principle to apply in life. 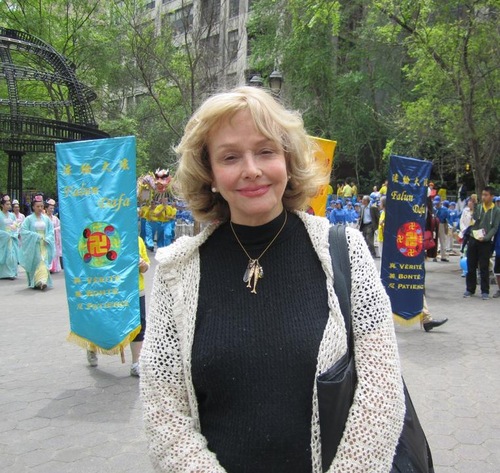 New York writer Cheryl Lee Terry stood quite a while watching the parade. She remarked, “Falun Gong is very peaceful. I am happy to see the expansion of Falun Gong.”

Ms. Terry was sympathetic towards the practitioners who have been persecuted in China. She did not think that the CCP would change. She said, “Fortunately, Falun Gong practitioners can practice freely in the United States.” 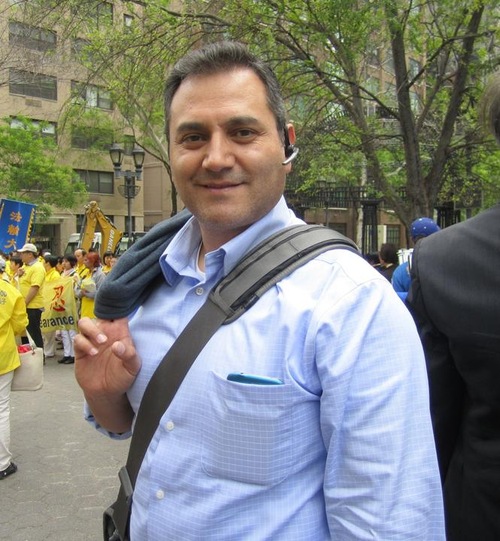 “Splendid. I'm enjoying the parade very much,” said Dr. William Romero, who appreciates traditional Chinese culture. He said that he planned to learn more about Falun Gong and the persecution in China.

Senior Chinese Lawyer: Falun Gong Is the Hope of China

“Human beings need spiritual belief. Communism promotes materialism, not morality and humanity,” said a senior Chinese lawyer who did not wish to disclose his name. He said he has been in business for more than 40 years. He said that Falun Gong is the hope of China, “The whole world will help Falun Gong. The communist totalitarian control in China will disappear. The Communist Party has been around for several dozen years. Yet human civilization has lasted several thousand years. The CCP cannot maintain its violent control for long.”

Rain Li came to the US a few years ago. He said, “I visited the Epoch Times website by circumventing the Internet firewall when I was in China. I renounced my membership in the CCP-affiliated organizations. The principles of Truthfulness-Compassion-Forbearance are consistent with Chinese traditional values. But the nature of the Party contradicts humanity.”

Paul from Harbin, Heilongjiang Province, China came to New York very recently. He said, “I watched NTDTV in China and learned a lot. I agree with the principles of Falun Gong. The three words (Truthfulness-Compassion-Forbearance) are full of positive energy. For young people, they can help them grow in their careers. For senior people, they can help them live peacefully. China needs Truthfulness-Compassion-Forbearance.”