Practitioners come from all walks of society, and each person has a unique story about why they practice. Below are three of the many stories shared with tourists at West Bay. 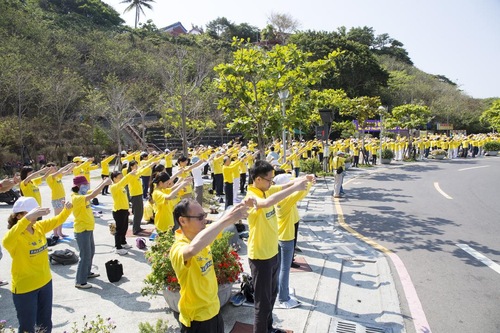 Practitioners do the exercises to celebrate the 16th anniversary of World Falun Dafa Day.

Falun Dafa Showed Me the Meaning of Life 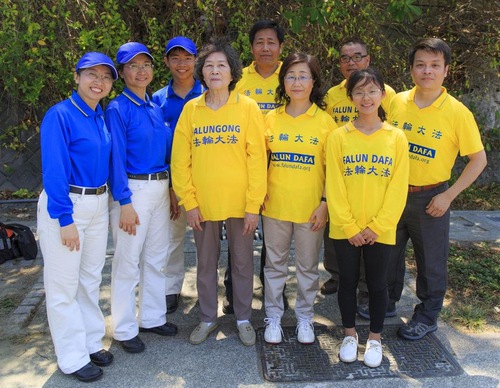 Meihui (front, second from the left), an accountant, introduced Falun Dafa to her family.

Meihui's relationship with Falun Dafa started in 1999 after more than 10,000 practitioners appealed to the central government near Zhongnanhai in Beijing on April 25.

After she read about what happened in the China Times, she was impressed by the fact that 10,000 practitioners had left without leaving a single piece of trash on the ground.

“This exercise is very special. I want to practice it, too,” Meihui told herself.

She spent a lot of time searching for where to learn it, but couldn't find a practice site. She finally called the China Times newspaper, and the reporter connected her with professor Liu Saodong of Kaohsiung Medical College, who was a Falun Dafa practitioner.

She bought the book Zhuan Falun and an exercise videotape, and began to learn the exercises from the video.

For years, Meihu's busy life and work had zapped her of her youth and energy. She felt that her life was too busy. Reading Zhuan Falun changed that.

“Fortunately, after I read Zhuan Falun, my mood brightened. I realized that the meaning of life is to return to one's true nature. There is hope and the chance to return to your original, true self if you truly cultivate your heart and do the exercises,” said Meihui.

Shortly after she started to practice Falun Dafa, her neck and shoulder pain from sitting for long hours in the office disappeared. A month later, she took her mother to the practice site and also recommended it to her younger brother.

After her mother and brother took up the practice, her brother's wife, Cuimiao, began to practice.

Cuimiao worked at a high pressure job and had a two-year-old child. She was depressed and often couldn't sleep well.

One night, she again couldn't sleep. Her husband woke up and asked her, “How about I teach you the meditation? It'll help you sleep.”

“Ever since the night I did the Falun Dafa meditation exercise for the first time, I felt my energy come back to me. I didn't sleep the whole night, but I was still energetic in the office,” said Cuimiao. Since then, she has been practicing Falun Dafa.

Later, her mother-in-law reminded her to read the book Zhuan Falun,which, in turn, changed her attitude on life.

“Before, I would get upset if I was treated unfairly. I worked hard but didn't always get what I expected. Zhuan Falun taught me something different, such as the transformation process between virtue and karma. Gradually, I could keep a compassionate and peaceful heart, my xinxing level increased, and my work environment became better and better,” said Cuimiao.

An Injured Man Becomes Healthier Than Ever 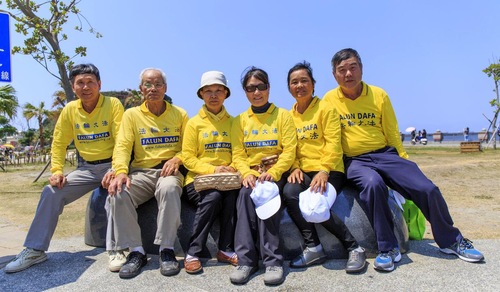 Su Fengwen (first from the left) and his family of practitioners.

Eight years ago, 63-year-old construction worker Su Fengwen was injured and forced to retire. After surgery, the doctor told him not to work for three months. Su took this opportunity to visit friends and relatives.

Eight years later, Mr. Su is healthier than he ever was and can help with a lot of housework for his children and grandchildren.

Because of Mr. Su, his younger brother's family and their children started to practice Falun Dafa. After he and his nephew started a group practice site at Qiaotou Elementary School, many seniors joined the group, and they often travel together to promote Falun Dafa and talk to Chinese tourists about the persecution of Falun Gong in China.

Falun Dafa Turned Her into a Considerate Wife 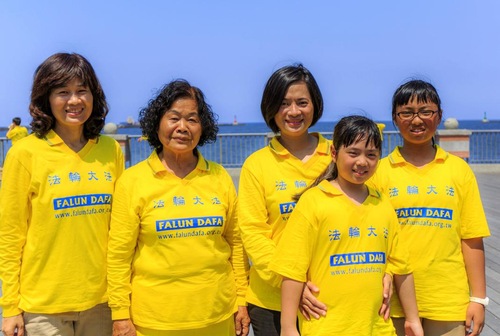 Laizhi (second from the left), her mother, her sister, and two daughters

Laizhi's husband often tell his friends that he benefited the most after she started practiced Falun Dafa.

She used to be a mid-level manager before she retired and was very bossy. When she retired, her husband took her to the local cultural center to learn Falun Dafa to improve her health. What she gained was way more than good health.

Falun Dafa changed her attitude when it came to dealing with people and conflicts. She became more considerate and had a very different way in dealing with her family, husband, and children.

Ms. Laizhi said, “I used to be controlling and overbearing. After cultivating Falun Dafa, I understood the principle of karmic relationships. My temper is better and I've become more considerate. I now know that it's my responsibility to do housework.”

Seeing how Ms. Laizhi changed, her daughters have started to practice and often join her in Dafa activities.

As of now, 9 members in the Laizhi family practice Falun Dafa. “Words fail me in trying to express my gratitude to Master Li!” said Ms. Laizhi.