Spectators learned that the gathering commemorated the 16th anniversary of a peaceful protest in Beijing and celebrated the milestone of 200 million people withdrawing from the Chinese Communist Party (CCP) since 2004.

On April 25, 1999, 10,000 Falun Gong practitioners peacefully gathered at Zhongnanhai, the central government compound, to protest the beating and arrests of 45 practitioners in Tianjin a few days prior. Three months later, the communist regime launched its violent nationwide persecution of Falun Gong.

Mainland tourists took the opportunity to learn more about the persecution in China. Some sought practitioners' help to register their withdrawals from the Communist Party. 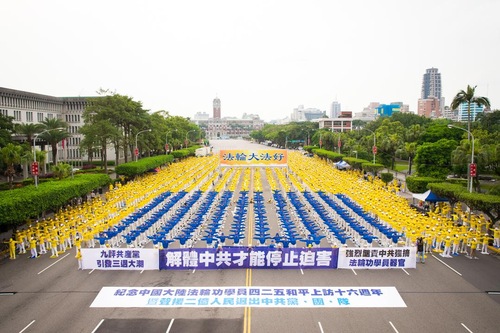 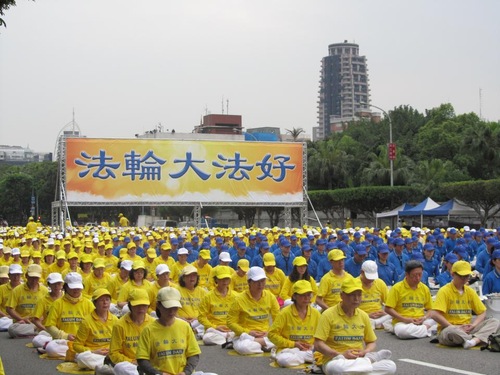 Withdrawing from the Communist Party has become an important objective for some Chinese tourists as they travel abroad. Many Falun Gong practitioners in Taiwan volunteer their time at popular tourist destinations to help tourists register their withdrawals.

“We Are Aware of All You've Said!”

Falun Gong practitioner Ms. Yang Subi from Yunlin County has spent the majority of her spare time over the last decade talking to Chinese people about the persecution of Falun Gong and quitting the CCP.

Ms. Yang often tells Chinese tourists, “The Communist Party has committed numerous crimes. It has killed countless Chinese people through various campaigns. It has gone as far as harvesting organs from living Falun Gong practitioners to fuel its organ transplant industry. Whoever commits wrongdoing will meet with karmic retribution. Don't carry the Party's burden when it is held accountable. Hurry and quit it for your own safety.”

Ms. Yang talks to one group of tourists after another, sometimes until she loses her voice. Some tourists gave Ms. Yang thumbs-up gestures. Others tell her, “We know about all this.” Some who had already quit the Party volunteered to help others quit.

She said people often ask if she feels tired, but she tells them, “I've benefited a lot from Falun Gong. I should return the favor.” Ms. Yang tells the tourists how her former illnesses disappeared after she started practicing Falun Gong. Ms. Yang said she wants to do her utmost to let more people know about the persecution.

“The Communist Party Is Too Rotten. I Have to Quit!”

In one week, more than 200 tourists quit the Party at Sun Moon Lake. She said some people walked past their display boards, only to return and smile at her. Upon speaking, they immediately agreed to quit the Party.

Ms. Lai was happy to see that more and more Chinese tourists understand the persecution of Falun Gong.

Ms. Lai once offered to use an alias to help an elderly tourist quit the Party, but he refused and said, “I want to use my real name.” As he wrote down his name, he said, “The Communist Party is too rotten. I have to quit!”