Canada: Mayor of Penticton Proclaims May 2015 as “Falun Dafa Month” 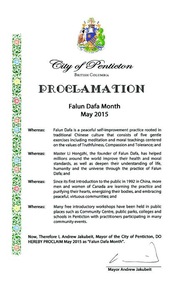 The following was stated in the proclamation:

Whereas: Falun Dafa is a peaceful self-improvement practice rooted in traditional Chinese culture that consists of five gentle exercises including meditation and moral teachings centered on the values of Truthfulness, Compassion and Tolerance; and

Whereas: Master Li Hongzhi, the founder of Falun Dafa, has helped millions around the world improve their health and moral standards, as well as deepen their understanding of life, humanity and the universe through the practice of Falun Dafa; and

Whereas: Since its first introduction to the public in 1992 in China, more men and women of Canada are learning the practice and purifying their hearts, energizing their bodies, and embracing peaceful, virtuous communities; and

Whereas: Many free introductory workshops have been held in public places such as Community Centre, public parks, colleges and schools in Penticton with practitioners participating in many community events.

Now, Therefore I, Andrew Jakubeit, Mayor of the City of Penticton, DO HEREBY PROCLAIM MAY 2015 as “Falun Dafa Month.”

“New Immigrant from China: Quitting the Party Is the Awakening of People's Conscience”

“Canada: Commemorating the Peaceful Protest in Beijing 16 Years Ago, and Celebrating over 200 Million CCP Withdrawals”