(Minghui.org) Pouring hot water on feet as a torture method was occasionally seen in Chinese fiction, such as Outlaws of the Marsh, but it rarely occurred in real life. During the persecution of Falun Gong in China, officials employed this method alongside other forms of physical and mental torture, aiming to destroy practitioners' belief.

Many accounts of such torture were found in Minghui reports, including pouring boiling water on feet, immersing feet in boiling water, and applying hot water after cold injury. The last one, in particular, caused many cases of disability.

Mr. Li Kun, 60, was once kept at the Yangjiang Prison in Guangdong Province. Guard Zeng Jianxing often ordered inmates to take him and other practitioners into a cell with no security camera to torture them. Besides pouring boiling water onto their feet, guards pierced their fingers or toes with toothpicks, and stuffed their mouths with feces-soaked mops.

“If you work hard [torturing them], your detention term will be reduced and you can go back home early.” Zeng said to the inmates, “And you don't need to worry about practitioners who are old or sick—if they die, their deaths will be attributed to their old age or illness.”

Similar torture was applied to Mr. Gong Enrong, a practitioner in Gaizhou City, Liaoning Province. He was sentenced to 4.5 years of imprisonment and sent to the Xihu Prison in July 2008.

Seeing that other types of physical abuse failed, inmates took him to the bathroom and poured cold water on his body, one basin after another. Seeing that Mr. Gong was unwilling to yield, the furious inmates beat him down to the floor, pierced his body all over with needles, and continued pouring water on him, first cold water, then boiling water. They also used cigarettes to burn his feet.

At least six inmates participated in this torture. As a result, Mr. Gong was badly injured, with eardrums ruptured, ribs broken, and his feet burned. Seeing Mr. Gong and both children detained and tortured for their belief, his wife suffered a mental breakdown.

Women practitioners also suffered the same fate. Ms. Han Shuhua, a practitioner in Dalian City, Liaoning Province, was kept in a metal cage and her four limbs were tightly tied to metal bars with her legs apart. Wan Yalin and other guards ordered inmates to beat her feet with wooden planks, insert a cucumber or wooden stick into her vagina, force-feed her hot pepper soup, and pour boiling water on her feet.

Seeing that Ms. Han had lost consciousness with both feet blistered, inmates untied her from the metal bars. They then dragged her on the ground back and forth. Even when Ms. Han regained consciousness from the pain and screamed loudly, the inmates continued until all of her blisters were torn open.

Ms. Ding Yubin, a practitioner from Jilin, once wrote about her experience at the Jilin Province Women's Prison, “Inmates Li Minghua and Zhao Xinghai forced Ms. Huang Linhua, a practitioner from Changchun City, to squat down every day for over two months. As a result, her legs were severely swollen. The two inmates took a basin, added about a half gallon of boiling water from a big thermos plus a cup of tap water, and told Ms. Huang to put her feet in it. As Ms. Huang cried out with burning pain, the two inmates pushed her legs down and held them there.”

Even practitioners with disabilities were not spared. Mr. Wang Hongrong was sentenced to eight years of imprisonment and sent to Suzhou City in Anhui Province in 2005. The long-term intensive torture left him with paralysis from the chest down. With orders from guards, inmates poured boiling water into a basin and pushed his feet into it. Mr. Wang's feet were immediately swollen and ulcerated with blisters after a few hours. 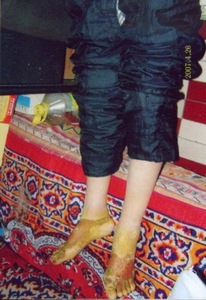 Mr. Wang's feet were immediately swollen and ulcerated with blisters after a few hours.

Many of us know that once a person is injured by extreme cold, he or she should not be treated with hot water; otherwise, the wound would get worse and may lead to disability.

Mr. Yang Baochun, a textile plant employee in Handan City, Hebei Province, was sent to the Handan Labor Camp for practicing Falun Gong. In the coldest days of winter in 2000, guards removed his clothes and shoes, and forced him to stand in the snow barefoot for a long time. They then soaked his feet in hot water. As a result, his feet were severely injured and ulcerated. His right leg had to be amputated.

Mr. Wang Xinchun from Yichun City, Heilongjiang Province is another case. When he distributed Falun Gong materials on January 8, 2001, police saw him and chased him. Mr. Wang Xinchun fell into a river by accident, and his legs were wet and frozen. He was still able to walk when police arrested him two days later. After beating him, they put his frostbitten legs in a large container with hot water for several hours. Mr. Wang Xinchun's feet lost feeling and he was unable to stand.

Police sent Mr. Wang Xinchun home on the afternoon of January 11. His feet had blisters with yellow liquid coming out. His feet continued to deteriorate day after day and he lost his feet 10 months later. 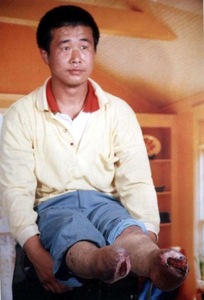