(Minghui.org) An eye inflammation known as uveitis causes eyes to redden, blur, and swell, and is extremely painful. At an advanced stage, it can even mean the loss of vision. Medical treatment takes at least a month. Even with treatment, symptoms can recur once or twice a year. There is no cure.

Mr. Huang Shicheng came down with unveitis in 1998, but at 82 he is now not only free of illness, but looks much younger than his age. Here is the story of his miraculous recovery. 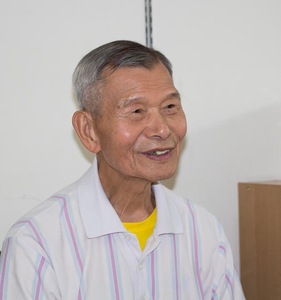 Mr. Huang began to work at the Tainan Post Office at an early age. With hard work, he was promoted to manage nine post offices in Tainan County. In 1998 as he neared retirement, he came down with a serious case of uveitis. This should have been his time to enjoy life, but doctors told him that he might go blind, and they could do nothing for him.

“When uveitis recurred, my eyes swelled, then my sight blurred, and finally I could see hardly anything,” Mr. Huang said.

“I underwent a month of medical treatment. Taking medication and applying drops only temporarily recovered my sight. First, the sight of one eye returned, then the other.

“Then I suffered what is known as 'flying mosquitoes.' It seemed as though mosquitoes were flying in front of me. It was really miserable.”

Mr. Huang tried a fitness program, which did not help.

Fortunately, his life turned around in 2000, when a friend introduced him to Falun Dafa. Mr. Huang was impressed that Falun Dafa could improve one's health, so he gave it a try. He soon joined a group for Fa study and practice at Dongning from 4:50am to 8:30am every day.

Then a miracle happened. Inflammation in his eye disappeared and never reoccurred. He persisted in practicing Falun Dafa exercises and studying Zhuan Falun for the next 14 years.

Mr. Huang is now 82. He is energetic and looks much younger than his age. He walks as fast as a young man and feels very light. He has few wrinkles and his black hair is returning.

A Treasure to His Family

Mr. Huang's family consists of three generations—he and his wife, their son and daughter-in-law, and a grandson. His family treasures him.

Caring for a Seriously Ill Wife

Mr. Huang's wife had suffered cancer three times. With chemotherapy she survived, but could not take care of herself. She recently became forgetful.

Thanks to his Falun Dafa practice, Mr. Huang follows the principles of Truthfulness-Compassion-Forbearance and cares for his wife with great patience.

Whenever his wife receives chemotherapy, Mr. Huang reads Zhuan Falun to her. He also encourages her to practice the Falun Dafa exercises. With this, Mrs. Huang recovers quickly after her treatments. She is also gaining back her memory.

Mrs. Huang attributes all of this to Falun Dafa. “I give thanks for Falun Dafa. It's the light and hope of my life. My husband's good health and kind heart enable him to take care of me because he cultivates Falun Dafa. I give thanks to Dafa's Master.”

Caring for a Grandson

Mr. Huang's son and daughter-in-law were busy in their careers, so he took care of his grandson. He took the child to school in the morning, picked him up after school, cooked for him, and helped him study.

His grandson is now a junior in college. The boy greatly appreciated his grandpa's efforts. “My grandpa is superb. He takes good care of us and is very considerate. He cooks for us, helps me with my studies, and cares for my grandma.

“He often introduces Falun Dafa to people. Whenever I think of my grandpa, I think 'Falun Dafa is good!'”

Mr. Huang added, “Thanks to the guidance of Falun Dafa, we have a cozy, peaceful, and happy family.”

Early one morning six years ago, Mr. Huang joined the practice and Fa study group at Cheng Kung University. As he returned home on a motorcycle, he heard thunder and it began to rain.

At the crossroad of Changrong and Dongning, a tree fell on him and a pedestrian. His first thought was, “Falun Dafa is good. Teacher, please rescue me.”

“At that moment, an ambulance arrived and took us to an emergency room at Chengda Hospital. I was given a checkup and all was well. We were both safe with Teacher's protection.

“However, another such accident happened to someone else that same day and that person died in the accident. It was reported in the newspaper on the following day.

“Because I practice Falun Dafa, my calamities turn into blessings. I have thanked Teacher for saving me many times. Teacher's grace is infinite.

“My most important work in life is to study the Fa, practice the exercises, and tell people about Falun Dafa. I will practice genuine cultivation diligently in return for Teacher's grace.”

The Chinese Communist Party (CCP) uses all its media to defame Falun Gong. Because of this, people in mainland China are deceived by the CCP's lies and propaganda.

Ten years ago, Mr. Huang began to write letters, telling people about Falun Dafa: “Falun Dafa is good. Falun Dafa has been spread all over the world to over 100 countries. Over 100 million people benefit from Falun Dafa. The CCP staged the self-immolation incident on Tiananmen Square to defame Falun Dafa. I hope friends in mainland China will understand the truth. This is the only way you will avoid disasters and have a secure life.”

He continues to mail materials to mainland China every day and has never stopped.

Mr. Huang also works towards an end to organ harvesting in China. The movement of “Collecting Signatures Calling for an End to the Persecution” was initiated in Taiwan in 2012 to expose the CCP's crimes of removing organs from living Falun Gong practitioners.

Mr. Huang Shicheng says, “People like to accept the materials about the truth and listen to me.

“After knowing the truth, they denounce the CCP's crimes of harvesting organs from living Falun Gong practitioners. Sometimes over 100 signatures are collected within a few hours.”

“Perseverance and Triumph Amidst 15 Years of Persecution”

“Husband and Wife Share Their Experiences in Cultivating Together”