(Minghui.org) Two city councillors from Parramatta, a suburb and major business district of Sydney, attended a local Falun Gong rally on March 22, 2015. They voiced support for the group's peaceful resistance to the brutal persecution in China. 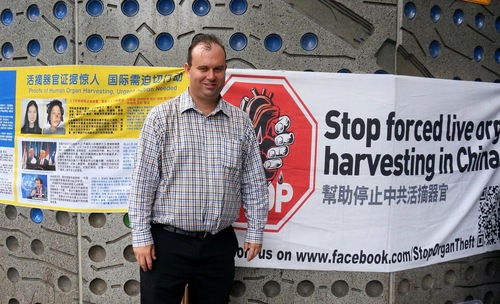 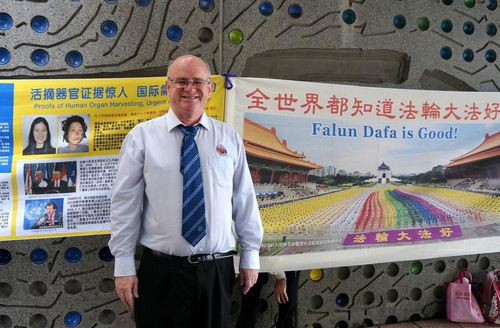 City Councillors, James Shaw and Andrew Wilson, spoke out against the persecution of Falun Gong, also known as Falun Dafa.

“No one should be the subject of organ harvesting,” said Councillor Shaw, who has read various reports on organ harvesting from Falun Gong practitioners in China. He went on, “Organ harvesting is appalling. It should not happen anywhere in the world to anyone. People should be entitled to believe what they believe and practice what they practice, as long as they don’t hurt anyone.”

Councillor Wilson also spoke about the importance of standing up against such atrocities. He said, “Regardless of what we believe in or what we disagree on, I think we should all be trying to do the right thing for humanity and defending human rights. What happens to Falun Dafa practitioners in China is clearly persecution, and I don’t support it.”

Councillor Shaw has been a longtime supporter of Falun Gong and human rights. At the event he told the Minghui correspondent, “There is nothing that restricts me about talking about human rights. I have a strong view personally that everyone is entitled to practice their religion or cultural beliefs without persecution. That is what I said from day one to Falun Gong in Parramatta, and I visited them a number of times and spoke to them, and I strongly expressed that view.”

Councillor Shaw is running a campaign as a Labor Party candidate for the state parliament. He said, “As a councillor I have expressed that view, and if I am elected, that will continue to be my view.”

Councillor Wilson said that after attending Falun Dafa rallies he received emails from the Chinese consulate attacking the Falun Dafa group. “The Communist Party are such terrible liars,” he said.

Councillor Wilson condemned the brutality of the persecution that Chinese Falun Gong practitioners have experienced for the last 15 years. He said he believes that the world would be a better place if everybody practiced “Truthfulness-Compassion-Forbearance.”

During the event, many people signed the petition.

Mr. West, a 65-year-old man who stopped to sign the petition, talked about his recent experience in China. He was mistreated by the Chinese authorities because he appealed for human rights for the Chinese people. He said, “The Chinese government is wrong. Everybody should have human rights. Falun Gong practitioners should not be tortured.”