(Minghui.org) Ms. Luo Zehui and her husband Mr. Jiang Xiqing were arrested together in 2008 for telling people about the persecution of Falun Gong. She was sentenced to eight years and her husband given one year of forced labor. 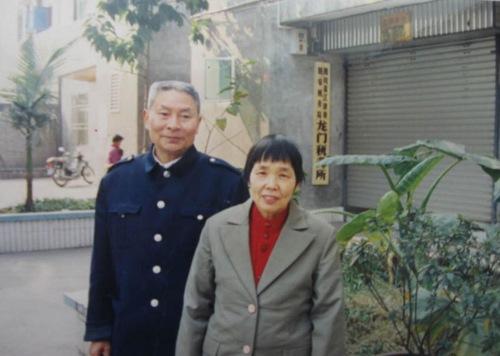 Ms. Luo and her husband

Mr. Jiang was cremated alive in January 2009 after being in critical condition due to brutal torture. His attorneys were beaten by the police for seeking justice for him, and his son was forced to provide false evidence in favor of the labor camp guards.

The prison released Ms. Luo on medical bail under international pressure in January 2010. She had to go into hiding to avoid further arrest.

The police have been pressuring Ms. Luo's son, Mr. Jiang Hongbin, to aid in their search for her during the past five years.

They took him to his sister's home on February 13, 2015, in an attempt to find their mother.

On the afternoon of March 4, a group of police officers broke into Ms. Luo's home and ransacked the place. She was not there, so they left.

The police arrested the younger Mr. Jiang at work the very next day. They threatened him, saying, “As soon as you tell us your mom's whereabouts, we'll release you.”

“Looking Back on Master Li's Five Seminars in Guangzhou (Part 3)”