(Minghui.org) Falun Dafa practitioners in Singapore, along with practitioners from Vietnam, Malaysia, and Indonesia held the annual Singapore Falun Dafa Cultivation Experience Sharing Conference on December 27, 2015, just before the onset of the New Year.

At the conference, 23 practitioners of different ages shared how they had improved by following the Falun Dafa principles, Truthfulness-Compassion-Forbearance. The peaceful atmosphere deeply impressed Mr. Ruan from Vietnam.

“Coming here is like returning home, although we can't meet Master in person,” said Mr. Ruan.

The attendees gathered after the conference for a group photo, to be sent to revered Master with their 2016 New Year's wishes.

Practitioners at the Singapore Fa conference 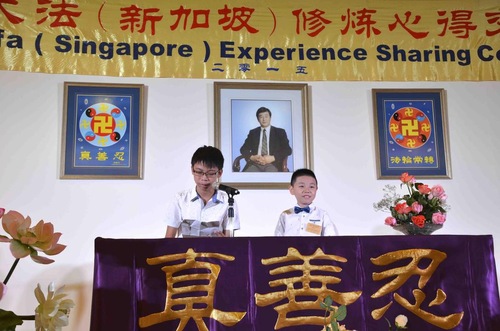 Ten-year-old Junjun was rather sickly before he began practicing Falun Dafa, and he was always on medication. He had to visit the doctor at least twice each month. After each visit he was given prescriptions for various medications. The medications made him feeble, weak, pale-looking, and thin, which worried his parents.

Junjun's mother enrolled him in the Minghui School, which is a school run by Dafa practitioners, at the age of seven. This was the beginning of his Dafa cultivation path. His health improved, and he soon no longer needed the medications.

He said, “In the Minghui school, I read Zhuan Falun, the main book of Falun Dafa, and do the exercises with other young practitioners. This changed my life from misery to happiness.”

Junjun's father, who is not a practitioner, strongly opposed Junjun’s Dafa practice, but after witnessing the improvement in Junjun's health, he changed his attitude. He even reminded Junjun's mother to bring along Zhuan Falun when he took his family on a holiday trip to Hong Kong last month.

Seven-year-old Xuanxuan is a Primary I student. He enrolled in the Minghui School in 2013.

“I really enjoy being a student in the Minghui School,” Xuanxuan said. “Every week I remind my mother to take my brother and me to the Minghui School… I gradually came to understand that practitioners must cultivate compassion and mercy. We must not fight back when being punched or insulted. So I have tried to follow Master’s requirements.”

When someone bullied him at school, he tried hard to overcome his anger, because he wanted to punch that student's face. But, he realized that he practices Dafa and thus should not behave like that.

He said, “I was so angry that I went to the bathroom to cry loudly, and I asked Master [the founder of Dafa] for help. After I stopped crying, I felt better and went back to class.”

Xuanxuan always helps clean the classroom and assists fellow students with their needs. His teacher praised him and he won the award for outstanding virtues, and also received a scholarship.

Youth Practitioner: Cherishing the Opportunity of Cultivating in Dafa

Lingxi practiced Falun Dafa with her mother when she was young. As she grew up however, with the endless cramming at school and later work pressure, along with wanting to enjoy life and comfort, she gradually moved away from the practice. She seldom read Dafa books and rarely participated in group Fa study or exercises. When alone at night, she wondered if she was still a practitioner.

It was not easy for her to return to Dafa cultivation. She encountered severe interference from thought karma whenever she read Dafa books. She also experienced negative thoughts and doubts about Master. This resulted in a number of xinxing tests. However she constantly resisted the unrighteous thoughts, and became determined to do well everything that practitioners should do. She studied the Dafa books, sent righteous thoughts, and talked to people about the practice.

She became a truly diligent cultivator after watching the Shen Yun performance in Japan this April.

“I participated in more Fa-validation projects,” she said. “Although I was tired after a day’s work, I felt energized and happy the minute I started on a Dafa truth clarification project. I often had to stay up till dawn to do the layout for truth clarifying materials, and felt wide awake when I went to a tourist site to do the exercises in the morning. I now feel fine, even with three or four hours of sleep.”

She continued, “Although we are young, we cannot squander our time. We must not indulge in the temptations of human society. Shouldn’t we be more steadfast in cultivation, and actively participate in more Fa validation projects? ” 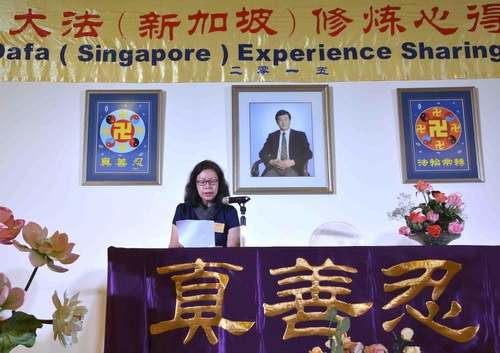 A practitioner shares her cultivation experience.

Ms. Tang talks to Chinese tourists at railway stations and tourist sites. She encourages and helps them quit the Chinese Communist Party (CCP) and its affiliated organizations.

She has met all sorts of people, with some even shouting and cursing at her. She never gives up and tries to do well with a compassionate heart. She explains from the other party's perspective when she comes across people of different backgrounds and ages, and is very flexible in her approach to clarifying the facts about Dafa.

She feels that it is more difficult to talk to Chinese tourists at tourist sites. She needs to speak very quickly to prevent interference from the tour guides, and also needs to react quickly, as some tourists do not want others to know that they are quitting the CCP. She reads experience sharing articles published on the Minghui website, and writes down and memorizes information she can use in her truth-clarification efforts.

She once met three elderly retired Chinese tourists who had been government officials. They were all Party members. Ms. Tang patiently explained that the CCP was doomed, and they would not want to be members when it was no longer in power. One quit the Party, and then helped persuade his friend and the other tourist to also quit the CCP.

New practitioners have started cultivating in Falun Dafa after listening to friends and relatives, or learning about the practice on the Internet. Their xinxing was tempered and upgraded, and they quickly joined truth clarification efforts.

Ms. Xu, who began practicing Dafa two years ago, said, “Before I began practicing Falun Dafa, I harbored strong attachments to fame and personal gain, and I led a stressful life resulting from this obsession. After I began Dafa cultivation and learned the true meaning of life, I realized that I would have to give up my attachment to fame, personal gain, and human emotions in order to return to my true origins. Although I understood this principle, it was not easy to let go of my attachments.”

Ms. Xu and her husband used to own a seafood supply business, but closed it due to poor demand. They turned to selling satay, which is grilled marinated chicken served in peanut sauce, at a hawker center stall. However having their social status reduced from business people to mere hawkers galled her and her husband, and they were constantly on the lookout for better job opportunities. Ms. Xu's husband signed up for a cooking contest organized by a television station. She thought that if her husband won the championship, it would help promote their shop.

Many of the judges and members of the public voiced their support for her husband, and it seemed that he would clinch the title. But he placed second in the final results. Her heart froze, and she fell into the depths of depression. She refused to study the Fa or do the exercises. With fellow practitioner's help and encouragement, she realized that Master used this cooking contest to remove her attachment to fame and personal gain.

With tears covering her face, Ms. Xu said, “Master, I was wrong, I want to continue practicing Dafa. In the future, I'll make sure to study the Fa and search within more often.”

Vietnamese practitioner Yu Xin (alias) did not attend the Fa conference. He submitted his cultivation experience sharing to the conference, and discussed that Falun Dafa has widely spread in Vietnam.

Yu Xin learned from a friend in 2001, that people in his area were practicing Falun Dafa. He became curious and went online to look for more information. He later attended a Fa-study group and practice site, and became a practitioner.

Initially he did not want others to know that he was practicing Falun Dafa, but discussions with practitioners untied the knot in his heart. They met people who were interested in the practice, and took turns clarifying the facts to those people. He could answer their questions well because he had many similar questions when he started cultivating. Thus, thanks Master’s careful arrangements, many people walked into Dafa practice, and many new practice sites and Fa-study groups were established.

Veteran practitioner Mr. Zhang said that attending the Fa conference made him feel that he was cleansed, and he benefited a lot. He said, “When I compare myself to fellow practitioners, I can see my gaps. I have seen where I have not met the Fa standards in my daily life. I feel as if I just learned how to cultivate.”

After listening to other practitioners share experiences, Mr. Li said that he hopes to become more diligent and join more projects. He feels that time can be adjusted. Some fellow practitioners need only three to four hours of sleep per day, but he needed five hours. He now realizes that as long as he can adjust his time well, he can participate in more Dafa projects.

Mr. Du from Vietnam said that they experienced pressure in Vietnam, compared with the environment in Singapore. He truly hopes that their environment will become more relaxed as they do better.

Mr. Hong, who has cultivated for 20 years, said that he was impressed by the diligence of practitioners who began practicing Dafa later than he did. He felt he had gradually slacked off after leaving China. He is now determined to cultivate diligently, as if he had just begun.

Mr. Xie, who began practicing Dafa six months ago, along with his friend Mr. Huang, who has practiced Dafa for just a month, went together to the Fa conference. They both said that what the practitioners shared was great! They said there was a large gap between them and other practitioners.

Ms. Xiahua, who read an article on behalf of a Vietnamese practitioner, said that she was impressed by the practitioner's strong righteous thoughts, especially since he cultivated in a less relaxed environment.