(Minghui.org) Falun Gong practitioners from central Taiwan held an experience sharing conference in Taichung on December 20, 2015 to share their stories and insights about improving in the practice. They also took the opportunity to wish the founder of Falun Gong Mr. Li Hongzhi a Happy New Year. 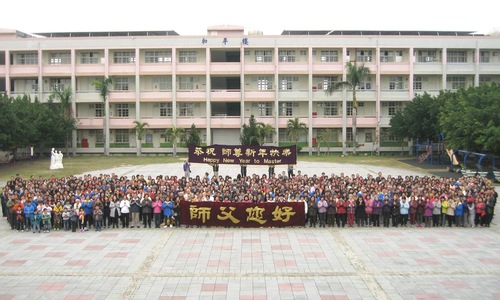 Many practitioners shared how they have benefited from Falun Gong, especially through following the principles of the teachings in their daily lives. Below are some of their stories.

Encountering Falun Gong at a Low Point in Life

“I was introduced to Falun Dafa when I had lost hope in life. I feel so lucky, and am grateful every moment for what Master has done for me,” said Mr. Liao Zhennan. He used to practice another qigong and heal illnesses for others for over 20 years. In the end, however, he realized that he had ruined his body and his moral principles by doing so.

At a point that Mr. Liao was desperate and thought that everything was over, he found Zhuan Falun, the book that comprises the main teachings of Falun Gong. After reading Zhuan Falun, his questions were answered and he knew the purpose and meaning of his life.

Now in his eighth year of practice, Mr. Liao feels that Teacher had cleansed and readjusted his body. “I couldn’t be more grateful,” he said. “I will continue the practice no matter what.”

With tears in her eyes, Ms. Wang Baoqing described how she regained her health through practicing Falun Gong. She was born with a heart defect and often experienced severe dizziness. Her heart once stopped when she was asleep. Ms. Wang's mother-in-law introduced her to Falun Gong when she was 29 years old.

The first time Ms. Wang did the sitting meditation, her heart beat amazingly fast. She decided to read Zhuan Falun and start practicing Falun Gong. Three days later, as she was riding a scooter down the street, she felt three hard blows on her helmet. “I became completely wide awake, with very clear thoughts,” said Ms. Wang. Her dizziness went away for good and her other ailments disappeared as well. “My hands and feet stopped being cold. I felt warm and realized that a strong energy was in me. Thanks to Teacher and Falun Gong, I now have a brand new body,” she said.

Ms. Wang’s parents and son also became practitioners because of her. She witnessed how Falun Gong helped her son become a better person. At lunchtime, the fifth-grader saved the best fruits for his classmates and ate the damaged ones himself. He picked up trash on the ground while others simply kicked it around.

Ms. Lin Yanyan, a former Catholic, suffered from cancer. A relative introduced her to Falun Gong after she had her eighth round of chemotherapy. Ms. Lin used to resent life and couldn’t understand what she had done to deserve cancer. After she read Zhuan Falun, she understood everything.

Ms. Lin used to be a hot-tempered person and didn’t forgive others easily. She was often angry at her coworkers when they couldn’t deliver, and she built up a lot of anger inside. After she became a Falun Gong practitioner, Ms. Lin was able to reflect on herself according to the principles of Falun Gong – Truthfulness, Compassion and Forbearance. She became more observant of others’ responses and was able to be more considerate of the needs of others. She worked on improving herself and on becoming a better person. Ms. Lin is now completely healthy and her life is much more fulfilling.

Yearning for the Meaning of Life

Software engineer Mr. Gong Qingde found the answer to his life-long questions after he started practicing Falun Gong. He always wondered whether there were other purposes in life besides just seeking happiness. He wanted to know what birth, old age, illness and death were all about.

In his sophomore year at college, his supervisor at his part-time job, who was a Falun Gong practitioner, told him that the purpose of life was to cultivate oneself. Mr. Gong read Falun Gong books and realized that he wanted to be a good person by following the principles of Truthfulness-Compassion-Forbearance, and rediscover his true, good nature. He has now found his way and has more confidence in life.