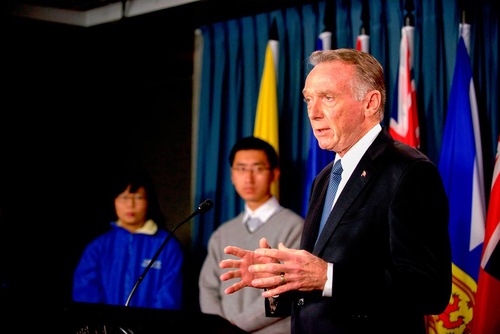 Mr. Kent noted that the current Chinese government has allowed some 200,000 criminal complaints against former Party leader Jiang Zemin to be registered in recent months. Official response to the criminal complaints has been slow, however, and Mr. Kent expressed his hope that China would follow through with the legal process to bring justice to all concerned.

Parliamentary Friends of Falun Gong will invite newly elected Members of Parliament to join the organization and to press China government on human rights concerns.

Two goals have been set for the coming year. One, to ensure that the criminal complaint process (in China) continues to its logical end. And, two, the Canadian government should strongly encourage, even demand that the Chinese government end the continuing persecution, illegal extrajudicial detention and torture of Falun Gong practitioners.

On behalf of 10 Canadian families who have family members who have been tortured and continue to be held in China, he urged the Canadian government to continue to convey concerns about human rights with the government of China.

She confirmed that the Prime Minister has raised concerns of human rights violations, including those involving Falun Gong practitioners, with the president of China.

She encouraged more Chinese people to file criminal complaints against Jiang. “I believe it is very important to speak up the truth. We must speak up against human rights violations more.” She said the world should not allow the persecution to continue.

“Zhang Jinku in Critical Condition from Torture, Family Renews Call for His Release”