(Minghui.org) Falun Gong practitioners in Rome held a series of activities on the square between Vatican and Castel Sant'Angelo in Rome on Oct. 31, 2015. Tourists from Italy and all over the world watched Falun Gong exercise demonstrations, heard practitioners recount stories of brutal persecution in China, and signed their names to support lawsuits against Jiang Zemin, the former head of the Chinese Communist Party (CCP) responsible for the persecution. 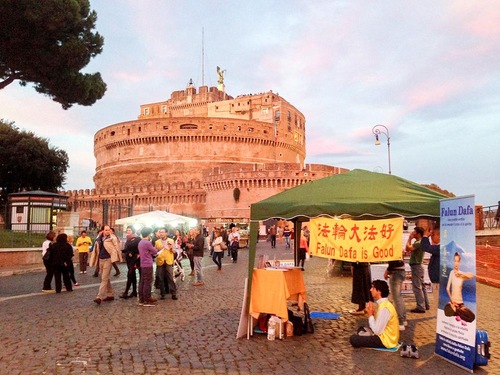 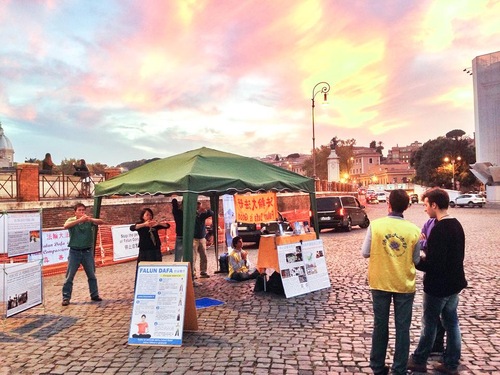 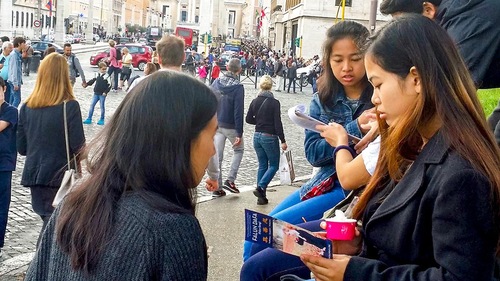 A mother and her daughter were on their way to a music class, when they noticed the activity. The daughter got off her bike, and wanted to learn the exercises. While she was learning, her mother carefully read all the displays, and asked Falun Gong practitioners about the persecution. They expressed their deep sympathy to the victims, and signed to support Chinese practitioners' lawsuits against Jiang.

A college student said she had had discussions with her classmates about the Party dictatorship. She thought all governments should pay close attention to the human rights issues in China. The regime there should be condemned by the whole world. The Chinese people have the right to voice their opinion. They shouldn't have to keep silent because of fear.

Tourists Call for End to the Persecution

On hearing facts of the persecution, a lady from France earnestly asked what she could do to help. A practitioner told her she could sign a petition. She said, “Yes, I must sign! It's what I should do!”

A student from China told a practitioner that he had visited many countries and seen Falun Gong in each one. He knew the persecution was wrong, and sympathized with the people under persecution. But he didn't know why Falun Gong practitioners would tell the Chinese to quit the Communist organizations.

The practitioner explained to him that it was the Chinese tradition to believe that good will be rewarded and evil punished. It's the basic morality passed down from generation to generation. However, the CCP had destroyed the traditional Chinese culture, and used atheism to turn the people against the divine. It brought down the morality of Chinese society. When joining the Communist organizations, people had to vow to pay their lives for the cause of Communism. Quitting these organizations would help the Chinese regain their freedom, and choose to follow morality and conscience.

The Chinese student said he understood now. He planned to find out more when he got back to his hotel, and quit the Party online.

A government official of the European Union happened to pass the Falun Gong booth. He said he had been supporting the effort to end the persecution for years. He expressed his admiration of Falun Gong practitioners' unyielding spirit. After signing his name, he encouraged practitioners to keep up their great work, and to never give up.