(Minghui.org) Falun Gong's peaceful resistance to 16 years of brutal persecution, especially the recent wave of lawsuits against former Chinese dictator Jiang Zemin for his role in launching the persecution, has received strong support from all walks of life in Taiwan.

In a recent interview, the mayor of Yilan City, Jiang Congyuan called upon all of society to stand together and say “No” to the communist party's persecution of Falun Gong. 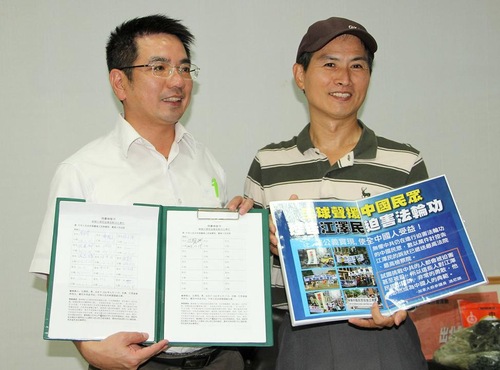 Jiang Congyuan said on November 19 that he was glad to see that so many people, including Yilan City Council members, have signed the petition to support the wave of lawsuits against Jiang.

“We want the new leaders of the communist party to hear everybody's voice. They need to know that human rights, as well as respect for human life, are the universal values that the whole world tries to promote.”

As a long-term supporter of Falun Gong, Jiang Contyuan has proposed many resolutions in the Yilan City Council condemning the persecution of Falun Gong and calling for its end.

Exposing the Persecution and Calling for Support in Taipei 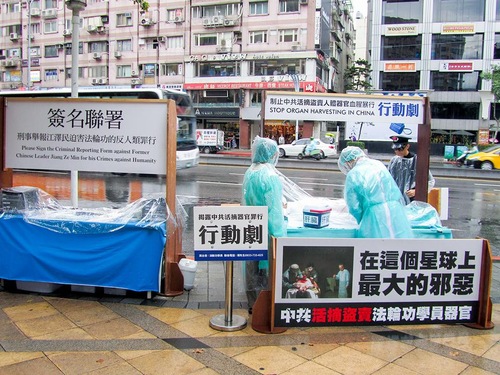 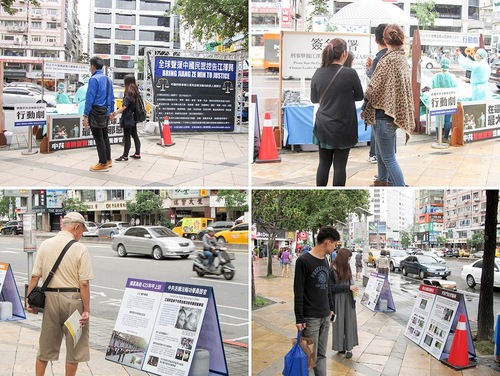 Passers-by read posters about Falun Gong and the persecution. 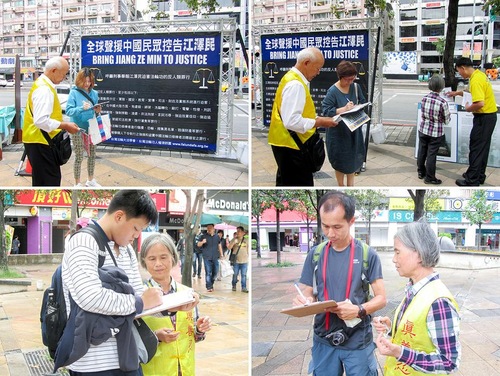 People sign a petition to report the crimes of former Chinese dictator Jiang.

The weather was cloudy with intermittent drizzle. Despite the rain, many passers-by paused to read the informational posters, watch the reenactment, take flyers and brochures, talk to practitioners and sign the petition.

Ms. Chiu, a young woman in her twenties, signed the petition supporting the thousands of lawsuits against Jiang Zemin. She told practitioners that she had learned about the persecution on the Internet, on Facebook and at tourist destinations where Falun Gong practitioners raise awareness of the persecution. Ms. Chiu pointed out that forced live organ harvesting was cruel and inhuman. She said that civilized society must stop such an inhuman persecution.

Mr. and Mrs. Smeeth, visiting Taiwan from the Netherlands, watched the reenactment while waiting for friends on the square. A practitioner explained the activities to them. The Smeeths were shocked to hear that such cruelty was taking place in China. Their first time to learn about Falun Gong, they signed the petition and praised the practitioners' efforts to expose the persecution. Before leaving, they picked up some Falun Gong introductory materials and other information in English.

Taipei Residents: Supporting Lawsuits Against Jiang Is the Right Thing to Do

Ms. Chen signed the petition and indicated that she knew a little about the persecution. She said, “The more people that sign the petition, the more power it will have to stop the inhuman live organ harvesting. Everyone should do their best to do the right thing.”

Ms. Lin, a woman in her thirties, stopped at the signature collection venue and immediately signed the petition. “I must sign this,” said Ms. Lin. “You've been working hard. Thank you!” She added that she'd seen news reports about the persecution and knew something about the live organ harvesting. She condemned the atrocities.

Mr. Chuo, in his eighties, lives near Dinghao Square. He came out to read the posters and watch the reenactment. Mr. Chuo said that he had heard about the persecution at Sun Yat-sen Memorial Hall and Taipei 101, as well as in news reports. He believes that the persecution of Falun Gong is wrong and that live organ harvesting is a crime. Mr. Chuo indicated that such a brutal persecution should be exposed.

“Signing the petition to support the lawsuits against Jiang is the right thing to do,” said Mr. Chuo. “Live organ harvesting for profit is wrong and terrible. Everyone should stand up to condemn the atrocities, call for bringing Jiang to justice and stop the persecution.”

Over the past 16 years, more than 3,800 Falun Gong practitioners have been confirmed to have died as a direct result of the persecution. The actual toll is likely higher, because such information is tightly censored in China. More have been tortured for their belief and even killed for their organs. Jiang Zemin is directly responsible for the inception and continuation of the brutal persecution.

Chinese law now allows for citizens to be plaintiffs in criminal cases, and over 190,000 practitioners and their family members are exercising that right to file criminal complaints against the former dictator. Joint reporting against Jiang was initiated in July 2015 overseas. So far, nearly 770,000 people in seven Asian countries have signed petitions supporting the legal actions against Jiang. More than 370,000 people in Taiwan have also signed to show their support.

“Falun Gong Banners Seen throughout the Streets of Changchun”