Chinese Tourist in Paris: “China Has Hope Because of Falun Gong”

(Minghui.org) Falun Gong practitioners who have maintained a regular presence to raise awareness at tourist attractions in Paris, such as the Eiffel Tower and Lafayette Mall, have seen a significant change in Chinese visitors this past year especially.

A much larger percentage of Chinese tourists are aware of the real situation behind the persecution of Falun Gong and have also withdrawn their memberships in the Chinese Communist Party (CCP) and its affiliated organizations back in China. Some of them encourage other tourists to declare their withdrawal from the CCP while at the Falun Gong activity. 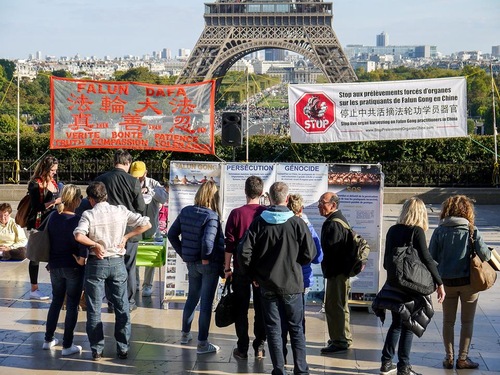 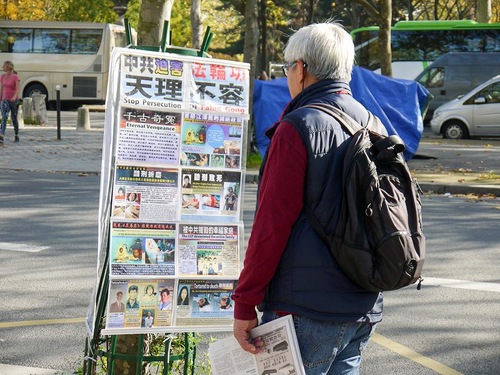 A tourist who already quit the Communist Party encouraged another tourist to to so as well, saying, “I have felt like a new person since I quit the Party. I feel fantastic!”

“Hurry and quit!” he urged the other tourist.

That tourist still hesitated, “I have to withdraw my Party membership of dozens of years?”

Ms. Zhang, a Falun Gong practitioner, chimed in, “Yes, you should, because the CCP has harmed many Chinese people.”

“I know, but I've gotten used to it since I live in China,” the tourist said.

“Being a kind person, you should choose a right path, break free of the Party's atrocities to embrace a bright and beautiful future!” Ms. Zhang said.

The tourist thus agreed to quit the Party happily. 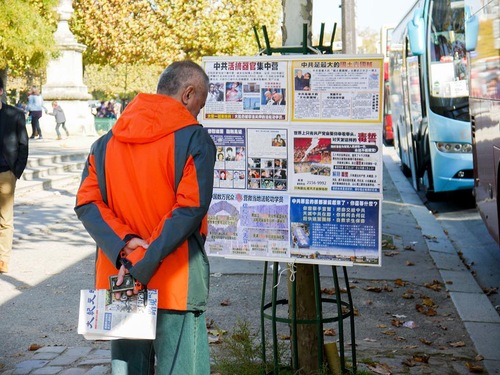 “China Has Hope Because of Falun Gong”

“Truthfulness-Compassion-Forbearance is magnificent,” said a tourist after Ms. Chen, a Falun Gong practitioner, helped him quit the CCP.

He continued, “I've been paying attention to this issue (Falun Gong). I've known Falun Gong is indeed great, it improves people's health and enables one to become a better person. When news of the self-immolation incident on Tiananmen Square came out, I suspected that it was a hoax.”

“We smokers know that if we accidentally make the lighter flame a little bigger, our eyebrows and beard will burn instantly. You take a look at that man (referring to Wang Jindong, one of the self-immolators) on the video footage, his face was severely burned, but his hair was left untouched. It's so fake,” said the tourist.

“Falun Gong is badly mistreated, such a good group of good people. I feel they have been wronged,” he said. “I feel the Communist Party's days are numbered, and Jiang Zemin should be arrested.”

“Take good care of your health!” he said before leaving.

Ms. Chen once met another tourist in his 60s who took the newspaper from her and said, “I'm well aware of this. I've read all about it. I've quit the Party, too.”

“China has hope because of Falun Gong,” he added.