Drastic Change: From Rejecting Falun Gong Materials to Handing Them Out

(Minghui.org) Avoiding or ignoring Falun Gong practitioners used to be the norm for Ms. Liu Hanyu, who lives in Ottawa, Canada, “Whenever I saw them at Parliament Hill or tourist sites, I would walk away without even looking at them.”

She was not alone. Many Chinese people treated practitioners the same way she did. After being influenced by the hate propaganda from the Chinese Communist Party (CCP), they simply chose to stay a distance from Falun Gong, without a second thought.

Time passes quickly, and these days Ms. Liu has met similar situations again, actually more often than before. The only difference is that she is now on the other side.

Speaking of this drastic shift, Ms. Liu said that she knows what is on the minds of the Chinese people—and furthermore, what this cold attitude means to practitioners. “I recently met some Chinese tourists from the same city as me. A woman asked me how much I was being paid for giving out pamphlets. When I told her I was a volunteer, she did not believe it and yelled at me, 'Come on, who on earth would do that for free?'”

After taking a tour at Parliament Hill, the same woman went up to Ms. Liu again, venting her anger in disbelief, “Did you say you don't get money for this? I know you are a liar—shame on you!”

Ms. Liu's heart sank, but she was not annoyed or upset, “My friend, please calm down. If you have a a few minutes, we could talk about it. I used to think the same as you, and now I know I was wrong.” 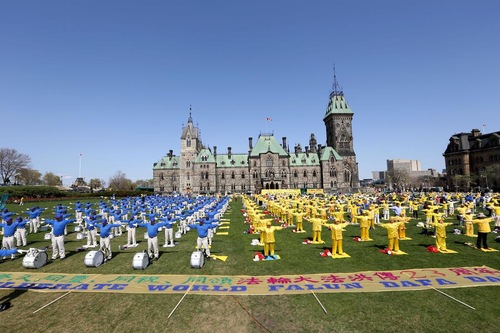 Ms. Liu did not read any Falun Gong books or have conversations with practitioners until 2012. But like most Chinese, she thought she knew what Falun Gong was. All comments about Falun Gong on TV, radio, newspaper, and even children's textbooks, were negative. Furthermore, this impression was turned into hatred after the staged Tiananmen Square incident, which took place in early 2001.

“When I watched this on CCTV (Chinese Central Television) that a girl crying for her mother who died in the fire, the ringing voice broke my heart. From that moment, I began to hate Falun Gong,” she recalled.

It lasted for about ten years. One day in 2012, when searching news from China, Ms. Liu watched a video from NTD (New Tang Dynasty) which highlighted the human rights violations issues in China. She was surprised that an overseas news media in Chinese could expose these problems so directly, but in the meantime, she was so happy because she knew that what she was watching was factual.

When glancing over the same web page, Ms. Liu noticed a video link with the name False Fire. Out of curiosity, she clicked the link and the computer screen immediately brought her back to what happened at Tiananmen Square ten years earlier. As the narrator went through the graphic analysis, along with evidence provided by third parties, the self-immolation incident was proven to be a hoax.

Ms. Liu was confused. One the one hand, she knew the video was convincing; on the other hand, she could not believe how such a big lie—something that turned hundreds of millions of Chinese against Falun Gong—could persist for more than ten years.

When passing Parliament Hill a few days later, as usual she turned down materials from a Falun Gong practitioner. She thought, “We all know the CCP is good at lying to people. How do I know that Falun Gong didn't make this up?”

Nonetheless, after thinking about the video she recently watched, Ms. Liu decided to do her own research and find out the truth.

Finding websites related to Falun Gong was not difficult. Starting with Falundafa.org, and Minghui.org, Ms. Liu quickly had a list of about one dozen most visited links. Upon reading further, however, she found two kinds of information.

One was from websites in China as well as overseas pro-communist links, which attacked and demonized Falun Gong in a manner that reminded her of the Cultural Revolution. In contrast, the websites run by practitioners or news agencies showed meditation, experience-sharing of mind-nature improvement, and peaceful rallies and marches calling to end the suppression.

Ms. Liu wondered, “Which side should I stand with, then?”

Going back to the video False Fire, she remember that it pointed out that the self-immolation incident was made up to slander Falun Gong. One piece of evidence was the inappropriate leg position of Wang Jindong, who had supposedly practiced for years prior to the incident. Most practitioners, especially veteran practitioners, sit with both legs crossed in the full lotus position, but in the video, Wang was sitting like a soldier.

Looking at the hundreds of meditation pictures with both legs crossed, Ms. Liu decided to test herself, “It looks simple. Maybe I can try it, too.” It was fairly easy to bend one leg. But as she tried to bend the other leg over the first leg, she found it impossible to do, even after many attempts.

Right at that moment, she realized that CCTV, along with other Chinese media, had been lying to people for all these years. Her brief moment of meditation with one leg crossed, on the other hand, triggered her interest to find out more.

From the Falundafa.org website she found a group exercise site near her home, so she dialed the number. A woman practitioner answered the phone and answered Ms. Liu’s many questions.

She learned so much from the exhibition, from the introduction of Falun Gong, to its popularity in China, and from the brutal suppression, to practitioners' perseverance in their righteous belief. She knew her search would continue, this time with a clear direction. 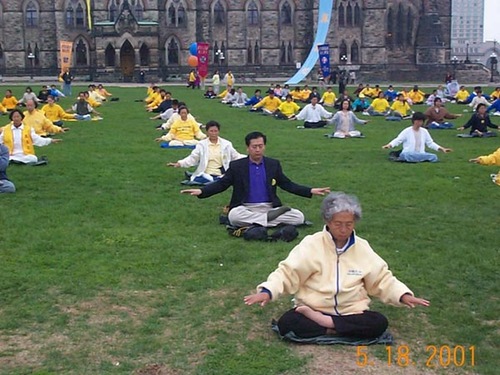 Group exercises at Parliament Hill in May 2001, about two years after the suppression took place in China.

Ms. Liu is a successful woman. As a business owner in Shenzhen, a city in Southern China near Hong Kong, she was wealthy and affiliated with several entrepreneur associations. The success of her career also made her competent and tough. “If someone dared to take advantage of me, he or she would be sorry,” Ms. Liu recalled. In fact, she had filed eight or nine lawsuits against her competitors to stabilize her business.

Her accomplishments, however, did not bring her happiness. She did not know the purpose of life. Was it money, social status, or love? She was not sure. After getting married and divorced a couple of times, she was even more lost.

“My life will end with three possibilities: insanity, suicide, or going to a temple,” she once said to her family.

The newly-discovered meditation, and the positive energy from the exhibition opened a new path for her. She began reading Zhuan Falun, the main book of Falun Gong. In Lecture One, she saw the sentence, “In fact, let me tell everyone that matter and mind are one thing.”

“I was sitting on the bed reading at that time,” Ms. Liu recalled, “but I was so excited by that sentence that I jumped to the floor.” After suffering so many years of ups and downs in life, with questions regarding body and soul, she knew she had found a new world—a destination that would bring her light and hope.

Ms. Liu continued reading the book in the days that followed, and found herself drawn to the profound principles described therein. “I was so humbled compared to what was in front of me. In the past I thought I was a good person, but I realized that my ego contained arrogance, low self-esteem, jealousy, and so on.”

The practice of Falun Gong brought Ms. Liu more than she expected. Instead of worrying about herself and the future, she found her life filled with happiness. Moreover, she became more considerate of others.

“I now know Falun Gong, and have benefited so much from it. But what about those who still refuse to accept Falun Gong materials, and those who still hate it because of the CCTV lies?” She decided to go out and tell more people about her experience.

“Falun Gong practitioners are people just like you and me,” Ms. Liu often tells Chinese passersby as she hands out materials, “They have found something that can help them become better, and healthier, people. But the CCP persecutes them for no reason.”

“If you have a minute, please stop and read this.” She continued, “Innocent people are being harmed and even killed for their belief. We have to stop this—for you, for me, and for our society.”

“Fifteen Diseases Disappear after I Began Cultivation in Falun Dafa”