(Minghui.org) Peter Kent, Member of Parliament and chair of the Parliamentary Friends of Falun Gong in Canada, recently recommended to newly-elected Prime Minister Justin Trudeau that he address the persecution against Falun Gong practitioners in China.

Shortly after assuming the office in early November 2015, Trudeau was scheduled to attend the G20 Summit in Turkey (November 15-16), followed by the Asia-Pacific Economic Cooperation (APEC) Leaders’ Meeting in the Philippines (November 18-19).

Kent hopes Trudeau will bring up the issue when he meet with Chinese leader Xi Jinping. Kent wrote in his letter, “In anticipation of Prime Minister Trudeau's initial meeting with Chinese President Xi Jinping, and, as chair of the Parliamentary Friends of Falun Gong, I respectfully call on our new PM to continue Canada's clear communication of human rights concerns in China.” 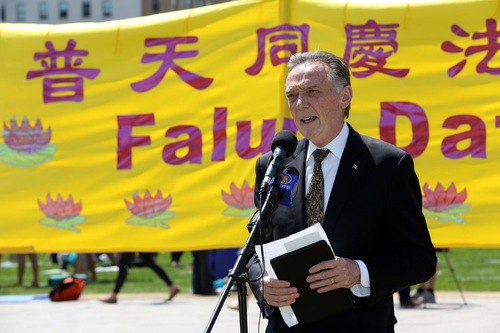 Peter Kent, Member of Parliament and chair of the Parliamentary Friends of Falun Gong in Canada.

Jiang Zemin started the suppression in 1999. “The ruthless, deadly, extra-judicial campaign that ensued was powerfully documented in the 2006 Kilgour-Matas report, and updated in the 2009 publication, 'Bloody Harvest - The Killing of Falun Gong for Their Organs'.”

Kent said positive changes have been seen under Xi’s leadership. “... the Communist Party has implemented reforms, which among other things, have enabled many thousands of Chinese citizens to take legal action in the form of criminal complaints, against Jiang Zemin.”

“The allegations are very serious: torture, rape, murder, genocide, state-sanctioned organ harvesting and trafficking, forced labor, and more (as of September 2015, some 180 thousand criminal complaints have been filed with Chinese courts).”

Since the persecution is still continuing in China, he is calling on Trudeau to raise the issue with Xi and discuss it. “Again, as chair of the Canadian Parliamentary Friends of Falun Gong, a parliamentary group of MPs and senators from all parties, I respectfully suggest that the Prime Minister: convey Canada's concern that the criminal complaints against Jiang Zemin be considered fully and in a timely fashion, and strongly suggest that the continuing persecution of Falun Gong cease forthwith... Canadians of Chinese descent now comprise almost five percent of our population. Many are practitioners of Falun Gong and/or have relatives in China who are practitioners.”

The letter concluded with Kent stating his belief that all citizens of China, like all citizens of Canada, will benefit from greater freedom, as well as the principles of Falun Dafa, Truthfulness-Compassion-Tolerance.

“My View on Marriage with Non-practitioners”

“Drastic Change: From Rejecting Falun Gong Materials to Handing Them Out”