(Minghui.org) “Everyone should have freedom of belief,” said Sue Hirst, who paused when passing by a Falun Gong practitioners' event near Chinatown in Sydney, Australia on November 7, 2015. The practitioners had poster displays, held banners, explained the persecution, and collected signatures opposing the Chinese Communist Party (CCP)'s live organ harvesting, to raise awareness of the persecution of Falun Gong in China.

The event was held on York St., Wynyard Park in downtown Sydney on November 6 and near Chinatown on November 7, 2015. 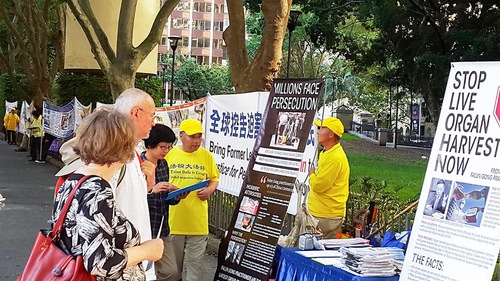 Kris and Alistair were shocked at the brutality of the persecution illustrated on the posters.

Kris and Alistair passed by the large banners and learned about the persecution. Kris said, “Shocking. We are shocked. How come there is no human rights and freedom of belief in China? Why do Chinese police arrest and persecute good citizens?” He continued to say that he planned to learn more online, and spread the news to his friends on Facebook. Both of them signed the petition opposing the persecution.

Social Worker Weeps Upon Learning of the Brutal Persecution 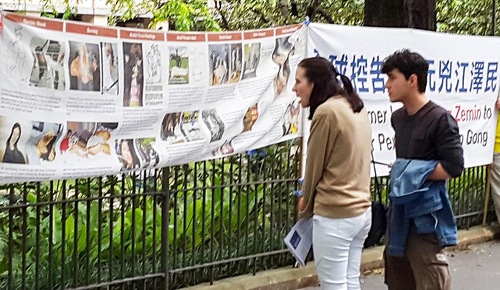 Mariana Jankvic and her friend look at the poster with information about the persecution. Mariana was shocked.

“My God! What has happened? Is this true?” said social worker Mariana Jankvic, originally from Slovakia. She and her friend passed by the banners and paused to look at them. She was shocked, and said while pointing to the photo of a practitioner being shocked with an electric baton, “Look, she is tortured so badly! Unbelievable!”

She read more information on the posters, and learned about Falun Gong and the CCP's persecution. After learning that practitioners follow Truthfulness-Compassion-Forbearance to become better people, for which the CCP brutally persecutes them, she was touched and wept. She said, “I am so sad. They (the CCP) are killing their own people. Why?”

Chinese Student: I Will Help to Stop the Persecution 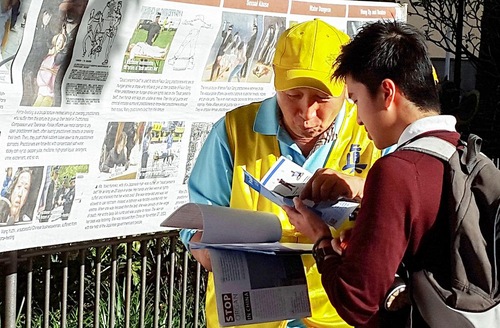 Liao Liguo (right) says, “I will do something to help stop the crimes!”

Liao Liguo, a Chinese student studying computer management at Macquarie University, felt sad after learning about the persecution of Falun Gong in China. He said in surprise, “Ah! Live organ harvesting without anesthesia. Horrible. It is worse than killing an animal! I cannot believe that humans are tortured and killed so brutally.”

Before leaving, he signed the petition to support the lawsuits against former Chinese dictator Jiang Zemin. He stressed that he would inform his friends about the persecution via Facebook, and do something to help stop the brutality.

Passerby: They Are Courageous. They Will Win the Lawsuit Against Jiang.

“The lawsuit by 200,000 Falun Gong practitioners? They are courageous. They will win the case. Jiang commits crimes against humanity. Suing him is not enough. I don't know what punishment suits him?!” said passerby Sue Hirst to a practitioner at the event near Chinatown on November 7, after learning about the persecution and the ongoing lawsuits against Jiang. 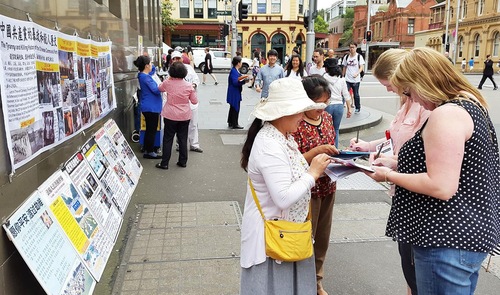 Crowds of people were passing by the banners at noon on Saturday. Some paused to learn about the fact. Some stepped forward to sign the petition opposing the live organ harvesting, and the petition supporting the lawsuits against Jiang Zemin.

Sue, and Renea, a college student, looked at the banners with information about the CCP's live organ harvesting from Falun Gong practitioners. Sue said indignantly, “Too cruel! Too horrible! We know a little but not details about the issue.”

She continued, “Everyone should have freedom of belief and rights to be good people. Humans are precious. Everyone should respect others. I hope I can do something to help stop the persecution.”

Both Sue and Renea signed the petitions opposing live organ harvesting and supporting the lawsuits against Jiang. 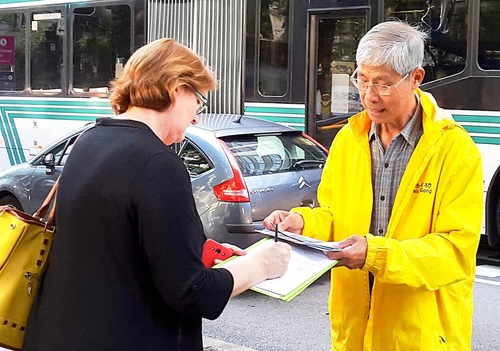 Sarah Nimoelc, waiting for a bus in front of the banners, says she supports Falun Gong, and signed the petition opposing the persecution. 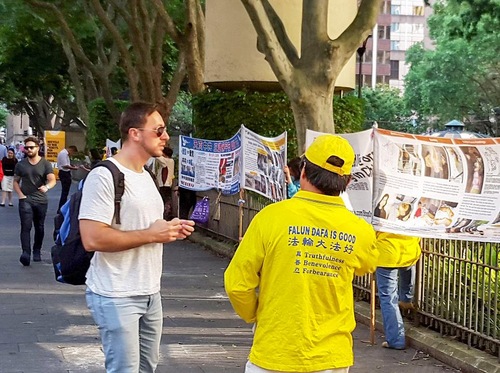 William Doclins looked at the posters for a long time, and signed the petition. He said, “Live organ harvesting is too horrible! Dictator Jiang must be brought to justice!” 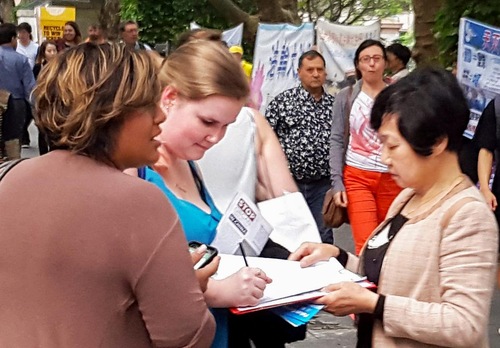 Kirralee Hart (left) and friend Rawla O (middle) sign the petition opposing the persecution. Kirralee said, “Such a brutal persecution for the last 16 years. Too horrible. I will spread the information to my friends. The persecution must stop.”

“China Fahui | Cherishing the Opportunity I've Waited All Eternity For”