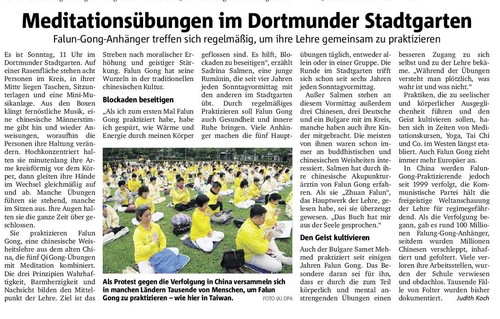 The report begins by describing the scene of eight practitioners peacefully doing the exercises together on the grass of the Dortmund Stadtgarten, a public garden in Dortmund.

“They were doing Falun Gong, five sets of exercises including meditation, which originated from ancient Chinese wisdom. Truthfulness, Compassion and Forbearance are the core principles. Moral improvement and uplifting spirituality are the goals.”

“'The very first time I practiced Falun Gong, I could feel heat and energy flow in my body,' said Sadrina Salmen, a young Romanian. She has been doing the exercises with others in the Stadtgarten every Sunday. The Stadtgarten has been the group exercise site for 6 years.

“Beside Sadrina, there are 3 Chinese, 3 Germans and a Bulgarian. Some of them bring their children. Most of them are interested in the wisdom of ancient China and Buddha Law. Sadrina heard about Falun Gong from her Chinese medicine acupuncturist. She was convinced the first time she read Zhuan Falun, the main study book of Falun Gong. 'The book touched my heart.'”

“Samet, a Bulgarian, has been practicing Falun Gong for years. What's special to him about this mind-and-body cultivation was that it helped him see himself and principles. 'It dawned on me what is true, and what's not.'

“Meditation classes which harmonize body and inner being and uplift spirit, like Yoga and Taichi, have gained popularity in the West for a long time. Falun Gong is getting more popular."

“Falun Gong practitioners have been persecuted in China since 1999. The Chinese Communist Party views the freedom idea of the practice as a threat to the party's power. About one hundred million people were practicing Falun Gong when the persecution was launched. Since then, million of Chinese people have been arrested, imprisoned, and tortured. Many lost their jobs, were expelled from schools, or became homeless. Thousands of persecution cases have been documented.”

“A Practitioner Shows that Falun Dafa Is Good, Even While Illegally Imprisoned”