(Minghui.org) Falun Gong practitioners from all over the world held a parade and a rally in downtown Los Angeles on October 15, 2015, calling for an end to the persecution and forced organ harvesting in China and urging that Jiang Zemin be brought to justice. 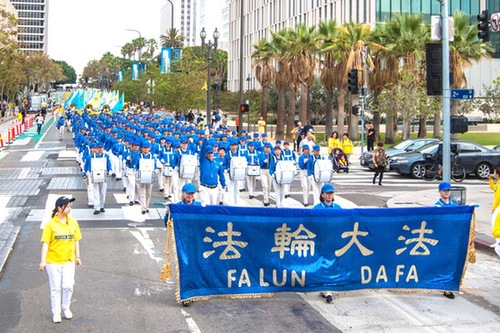 “Hundreds of followers of Falun Dafa, a spiritual practice originating in China, participated in a demonstration march Thursday in downtown Los Angeles.”

The report explained that Falun Gong, also called Falun Dafa, had been banned in mainland China since 1999.

“The practitioners, dressed in bright yellow and coming from Taiwan, Canada and U.S. cities including San Francisco and Los Angeles, marched, played instruments, and carried banners written in Chinese and English. One common banner contained both the common Falun Dafa slogan and its English translation: 'Falun Dafa is Good.'

“Other members stood on the sidewalks and handed out pamphlets and explained their cause to onlookers. Followers of Falun Dafa say that the Chinese government has been unjustly persecuting them for over a decade.

“After the march, a group of roughly one hundred practitioners from Canada gathered at City Hall and performed qi gong exercises. A member of the group said the practitioners were in Los Angeles for a conference on Friday...A rally is also scheduled for Saturday at the Santa Monica Pier.”