(Minghui.org) On the afternoon of May 8, 2002, in front of a public phone booth across from the city's largest shopping mall on the busiest street of Mudanjiang, Heilongjiang Province, a well-built middle-aged man grabbed me from behind. That was how I began seven years—2,556 days—of imprisonment.

My captor was a police officer from the Yangming Police Department. He arrested me because I was a Falun Gong practitioner. I was detained for six months and then sentenced to seven years in prison.

At Yangming Police Department, I asked why I had been brought there. Five officers began beating me before I even finished speaking. They confiscated the 1,500 yuan I had with me, along with my mobile phone.

I was tied to a chair and interrogated after dinner. I answered none of their questions. I was beaten, my shoes were removed, and my toes were whipped with an electric wire. The whipping felt as if an animal was biting me. I tried not to move my feet so that I would not think of the pain and would cry out. The officers also whipped my genital areas.

I started a hunger strike to protest. The officers opened a window, even though it was still cold at night in this city, which is located in northeast China. They poured cold water over my head. My clothes were wet, and the cold wind blew in. I began shaking.

I was beaten about the head. The beating stopped only after my body started convulsing.

On the night of May 10, I was taken to the Mudanjiang No. 2 Detention Center.

Guards took me to the on-duty office the next morning, and asked me to stop the hunger strike. I refused, so I was beaten. They also force-fed me.

The head of the detention center brought handcuffs and shackles. My hands were handcuffed behind my back, as well as my feet. The handcuffs and shackles were tied together, forcing me to stretch my arms and legs behind me to the maximum extent. I had to kneel at all times. I was not released when I needed to use the bathroom. Instead, an inmate was ordered to bring a container for my urine. I started convulsing again at noon, and I was released. I couldn't move for a long time. 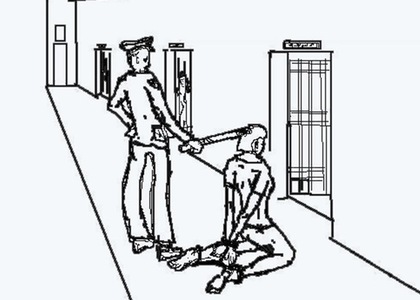 The next day, another guard asked me to eat, but I refused. He beat my buttocks with a plastic tube, and I was subsequently unable to sit for some time.

The detention center provided only two meals per day. It was always corn bread and soup (mainly salted water with a few green leaves in it). I once discovered a fly in the bread.

We were also forced to package chopsticks for export to Japan.

A high-ranking official once came to the detention center. The guards said he was the head of the Heilongjiang Province 610 Office. I was brought into a room to meet him. I refused to do what he wanted—renounce my belief. He got so angry that he shouted to give me a harsh punishment.

The Mudanjiang Court tried my case on October 29, 2002, without informing my family. “You guys (Falun Gong practitioners) should serve severe, harsh sentences!” a clerk said at the hearing.

The court sentenced me to seven years in prison. I appealed, but the Mudanjiang Intermediate Court upheld the sentence.

I was put in the Mudanjiang Prison on December 6, 2002, where I spent six and a half years.

I was forced to do all sorts of hard, manual labor. I packed and carried packages in the printing shop, extracted metal wires from waste, wove car seat cushions, and sewed soccer balls. I once fell off an upper bunk bed and injured my right foot in July 2005, due to exhaustion.

My protest of the persecution in early 2006 continued for nearly three and a half years. I refused to wear a prison uniform, respond to roll call, or perform forced labor.

The warden of my cell division once called me into his office. I didn't squat, even though prison rules require that inmates squat when in the presence of prison authorities or guards. The warden ordered guards to push me down. I then sat on the floor. He kicked me again and again, and ordered a guard to fetch an electric baton. The guard did not return with an electric baton for some reason, and I was let go at lunch time.

The next day the political instructor came to me and threatened to put me in solitary confinement. He ordered that my winter coat be burned. I started a hunger strike. Guards gave in to my protest. An inmate told me that I could do the exercises at night. I then started eating.

I was transferred to the No. 13 District in November 2006. The head of the Third Squadron ordered me to do manual labor, but I refused. He started taking me to a solitary cell. On the way, he was called away, and he left me in a regular prison cell.

I continued refusing to respond to roll call or do the forced labor. The guards no longer bothered me.

I was transferred to the No. 8 District in February 2007. Guards required me to do manual labor again. I refused, and they stopped.

I was transferred to the No. 7 District in May 2007. Guards there threatened to put me in solitary confinement. I didn't yield, and nothing happened.

While I was imprisoned, both my father and father-in-law passed away from pressure and worry for me.

My daughter not only could not get help from me, but also faced police harassment, having our home ransacked, having her phone monitored, and facing discrimination at school. This once outgoing, confident girl became cautious and sometimes paranoid. She could not pay her tuition after my income was stopped. Only with the help of relative was she able to continue her schooling.