Exposing the Persecution in London’s Chinatown

(Minghui.org) Falun Gong practitioners in London held activities in Chinatown on October 3, 2015, as they have done every weekend during the past several years. They demonstrated the Falun Gong exercises, exposed the persecution of Falun Gong in China, helped Chinese people quit communist organizations, and collected signatures calling for an end to organ harvesting from living practitioners in China. 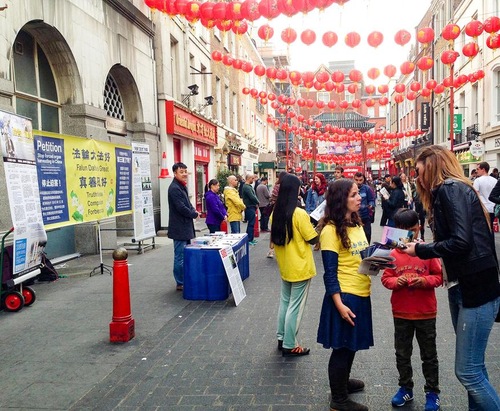 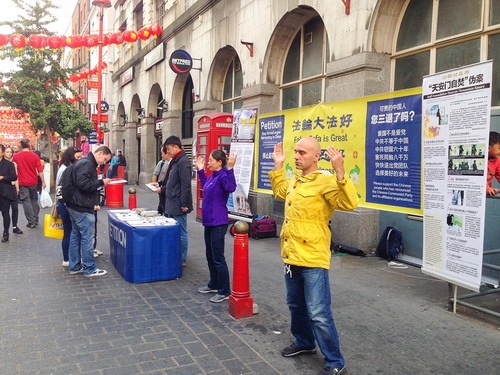 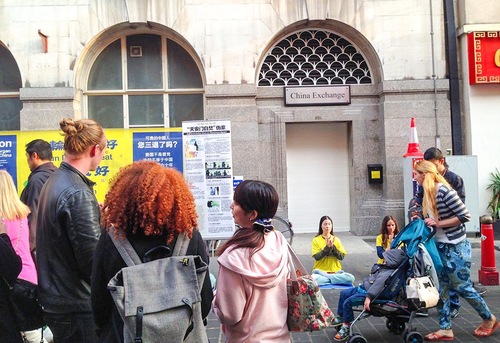 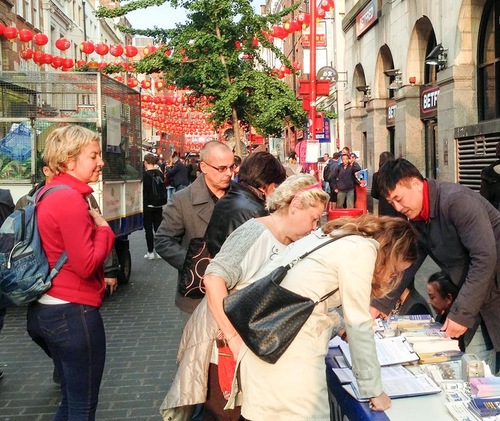 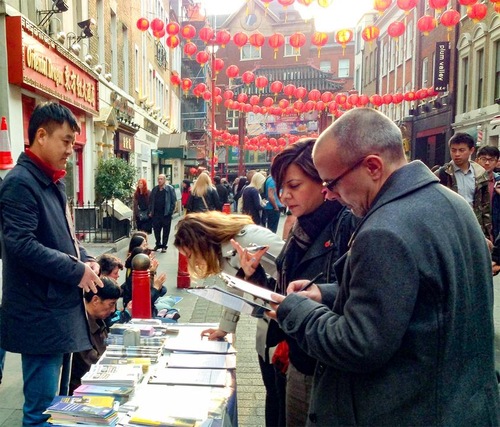 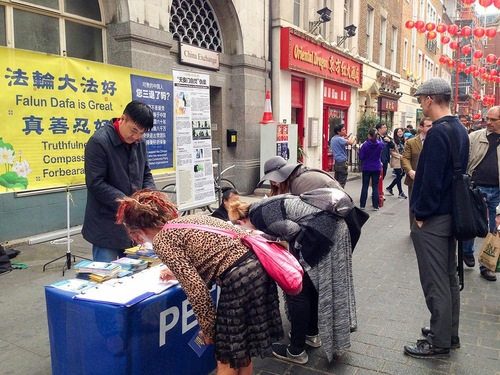 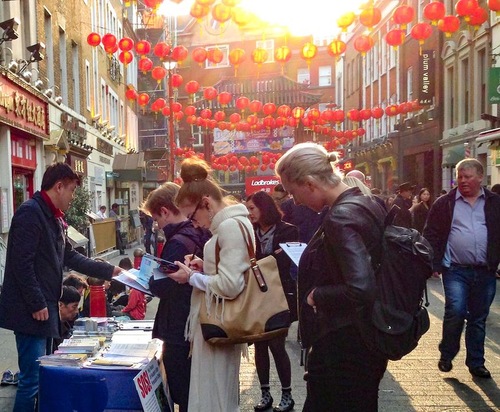 Many people signed a petition opposing the persecution.

London’s Chinatown is a busy tourist spot. Falun Gong practitioners bring updated information with banners and display boards every weekend. They hope that people from around the world will take this opportunity to learn the facts about Falun Gong, and choose to stand on the side of the righteousness.

Visitors to Chinatown learned new information from the banners, “Bring Jiang Zemin to Justice” and “Support 180,000 People Suing Jiang.” These banners describing the recent flood of lawsuits against Jiang Zemin brought the spirit of Chinese people's courage and sense of justice to London’s Chinatown. 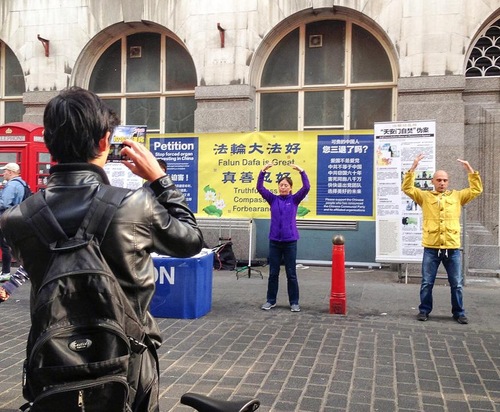 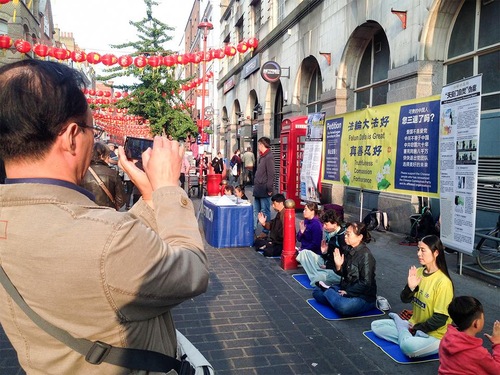 Elderly British Chinese: “I Have Been Waiting for It for 15 Years!”

One older British Chinese man greeted a Falun Gong practitioner in the late afternoon. He said he had escaped China when he was young because of his anti-communism standing. The Falun Gong practitioner asked him if he had heard about 180,000 people filing lawsuits against Jiang. The man gave them a thumbs-up, and said he had always thought that persecutors of Falun Gong should be brought to justice. He said, “I have been waiting for it for 15 years! Jiang is the head of demons. The Communist Party is downright bad! It's heavenly law that the wicked will be punished.”

British Falun Gong practitioner Tilly participated in the activities. She had started learning Chinese, so that she could talk with Chinese people about the facts of Falun Gong. As she was distributing flyers and collecting signatures, she saw a middle-aged Chinese man stop at the banners. Tilly greeted him in Chinese, “Nihao!” as she pointed at the banner about the lawsuits against Jiang. The man nodded his head in friendly manner and replied in Chinese, “I know. I know.” When a Chinese practitioner told Tilly what it meant, Tilly was very happy.

A young Chinese student named Wang approached the Falun Gong booth to sign the petition. She had just talked with Falun Gong practitioner Mr. Wang, who told her about quitting the communist organizations, the CCP's organ harvesting crimes, and the lawsuits against Jiang. The student immediately quit the Young Pioneers, and solemnly signed the petition calling for an end to the persecution.

British Businessman: “The CCP Is a Threat to Civilization” 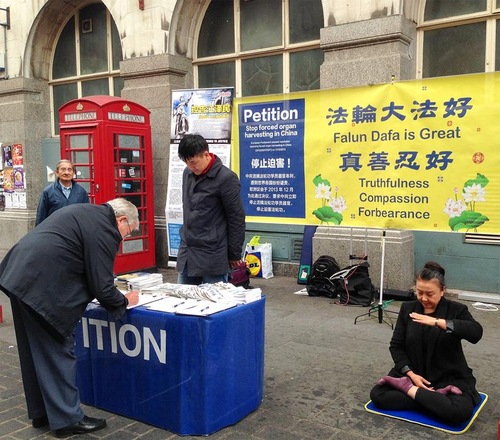 Jeff, a businessman, signs the petition.

Jeff, a businessman, and his wife happened to pass through Chinatown, and saw the Falun Gong practitioners' activities, and Jeff took the initiative to sign the petition. He told Falun Gong practitioners he had dealt with the CCP when doing business in China. His experience had shown him that the way the CCP handled things was a threat to the civilization. He wanted to remind the British government not to compromise with the CCP for investments and trade, as it would bring misfortune to the British. 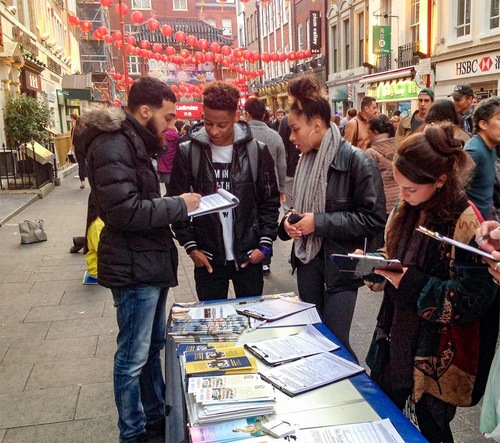 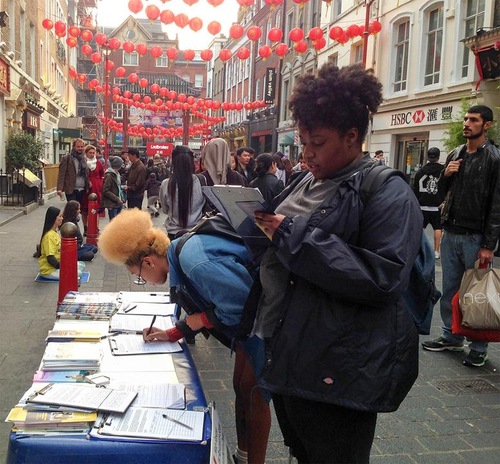 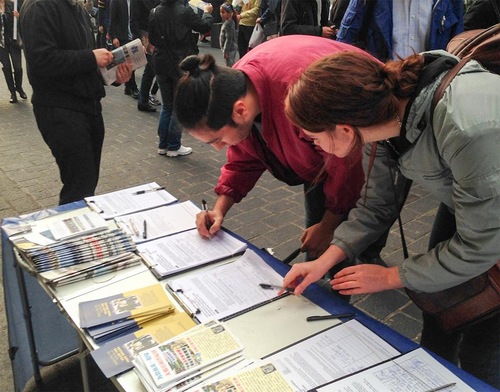 Mealani and Louis signed the petition, and expressed their best wishes to Falun Gong practitioners.

Mealani and Louis signed to condemn the organ harvesting from living practitioners in China. Upon hearing that Falun Gong practitioner Ms. Chen's sister had been persecuted for practicing Falun Gong a few months prior, Louis said sadly, “Your sister is very brave! The persecution is terrible!” Mealani said she hoped Ms. Chen’s sister would be released soon.