(Minghui.org) As an elderly man from Guangdong was watching the sun set at West Bay in southern-most Taiwan, a male Falun Gong practitioner approached him and handed him a special edition of a Chinese newspaper. The man's eyes scanned the front page, and then honed in on an article about the arrest of several corrupt officials. He turned to the practitioner and said, “This article only scratches the surface. The corruption, in reality, is far worse.”

The man asked the practitioner if 190 million Chinese had truly quit the Chinese Communist Party (CCP) and its affiliated organizations, as an article in the newspaper suggested. A young man standing next to them said, “It should be true. Falun Gong never lies.”

Several dozen tour buses, brimming with tourists from China, visit West Bay each day for sightseeing, and Falun Gong practitioners speak with these tourists about the persecution of the practice. The sincere attitudes of practitioners have helped many Mainland Chinese to understand that the information broadcast in China about Falun Gong is untrue, and simply another tool used in the ongoing 15 years of persecution.

A lady in her seventies came over to read the information boards provided by Falun Gong practitioners at West Bay. A male practitioner named Mr. Hsia said to her, “We are all Chinese people. The CCP has killed over 80 million Chinese people since it took power 65 years ago. The Party is too terrible! You have experienced many of the revolutions there. Please renounce your membership in the CCP for a safe future.”

The lady quietly agreed. She hung her head and started weeping. She said, “I have experienced many hardships. The party has done too many terrible things.” The lady bowed several times to express her appreciation to the practitioner. 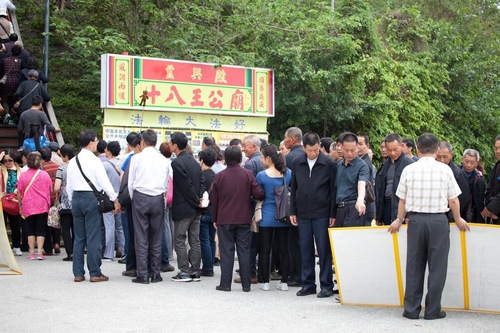 Falun Gong practitioners display information about the practice to Chinese tourists and help them quit the CCP. 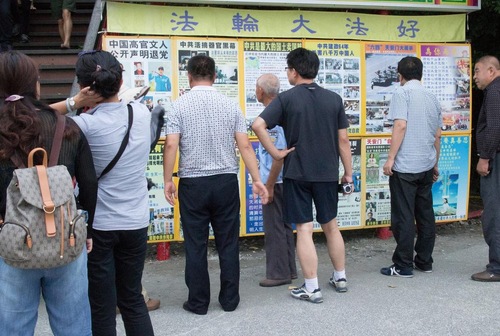 A Falun Gong information board at West Bay draws Chinese tourists. One tourist exclaimed, “This information cannot be seen in China.” 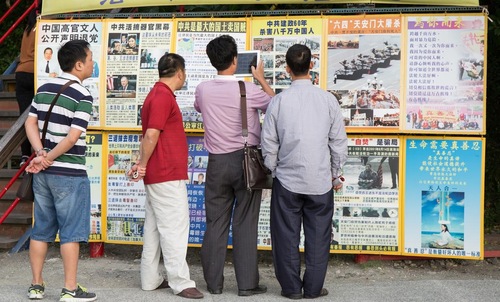 A tourist from China takes photographs using his tablet in front of a Falun Gong information board.

A lady from Xiamen became separated from her tour group and was very anxious. A practitioner named Ms. Tian helped the lady call her tour guide, and accompanied her while she waited for her party to return. During that time, Ms. Tian spoke with the lady about the persecution of Falun Gong in China. The lady, seeing the practitioner's kind nature, agreed to quit the CCP and its affiliated organizations.

Later another elderly lady was rushing around trying to find her tour group. A male practitioner, Mr. Hsia took her to the parking lot to find her tour bus. Her tour group was waiting there for her anxiously, and they were relieved to see her. One tourist said, “You were right to ask Falun Gong practitioners for help when you were lost. They are good people.”

Mr. Hsia said to them, “She has returned safely, but only by withdrawing from the CCP can everyone truly have a safe future.” The group of more than twenty tourists saw the practitioner's sincere attitude and agreed to renounce their CCP memberships. As Mr. Hsia left, one of the tourists called after him, “Thank you, Mr. Hsia. Falun Dafa is great!” 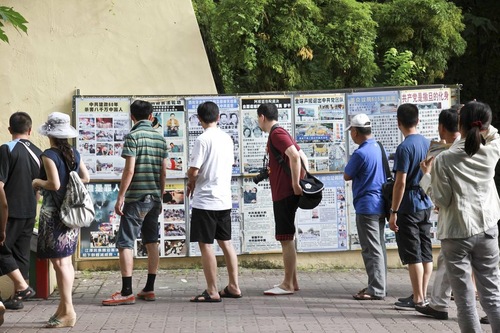 Tourists from China line up to visit the former British Consulate and view the Falun Gong poster boards as they wait.

Many Chinese tourists visit the former British Consulate in Kaohsiung. Mr. Hsia walks with them while informing them about the persecution of Falun Gong in China. Many tourists, after visiting the consulate, seek out practitioners to get help withdrawing from the CCP.

One lady in her thirties, who had spoken with Mr. Hsia earlier, saw him outside after her tour of the consulate's interior. She held both of her hands in front of her chest in the heshi gesture to him. Heshi is a traditional Buddhist greeting, used to show respect. She asked Mr. Hsia to help her renounce her membership in the CCP Young Pioneers.

A lady in her thirties from Northern China visited the consulate in December. She initially reproached a practitioner named Ms. Tian, saying, “I have my own belief. You practice your system, don't talk to me.”

Ms. Tian told the young woman, “I have no intention of changing your belief. I'd like to tell you that knowing the truth about Falun Gong, the nature of the CCP, and quitting the CCP, are key for securing a bright future.”

The lady visibly relaxed and asked Ms. Tian many questions about Falun Gong. She then asked Ms. Tian to help her quit the CCP Youth League and Young Pioneers.

A lady from Northeast China asked Ms. Tian curiously, “How much do you make in one day here?” Ms. Tian replied, “I am a retiree from a high school in Pingtung. We are all volunteers and do not make money here. I come here because of my personal belief and to help stop the persecution in China.”

The lady said, “I understand now, it was a lie from the CCP. Falun Gong practitioners are volunteers.” She quit her membership in the CCP using an alias, and asked her friends to come listen to Ms. Tian speak about Falun Gong and the persecution in China.

The CCP's propaganda about Falun Gong has also affected Taiwanese Chinese who come into contact with Mainland Chinese.

A young tour guide from Nantou in Taiwan had taken a group of Chinese tourists to West Bay. She sat down to wait for her group to return from their tour. She asked a practitioner, “I heard that you can make 500 Taiwanese dollars a day? Is that right?”

Practitioner Mr. Ong replied, “We are not short of money and don't make any money from doing this. That is one of the CCP's lies. The CCP persecutes Falun Gong and kills practitioners for their organs. We come here to help stop the persecution and tell Chinese tourists the facts about Falun Gong.”

The tour guide came to understand and said, “I understand now, and will encourage my tour group to read more information about Falun Gong, so that they can learn the truth.”

To date more than 190 million Chinese people have renounced their memberships in the CCP and its affiliated organizations.