(Minghui.org) “We can't ignore that fact that human lives are used as raw materials for organ transplantation or organ harvesting in the 21st century. It is unheard of since World War II and the Nazis. We absolutely won't tolerate such an evil deed,” said Leonidas Donskis, Member of European Parliament.

The European Parliament passed a resolution on December 12, 2013, calling on the Chinese Communist regime to “immediately stop organ harvesting from prisoners of conscience, religion and minority groups.”

Jiang Zemin, former head of the Chinese Communist Party (CCP), launched a nation-wide persecution of Falun Gong in 1999. Under the policy of “ruin their reputations, bankrupt them financially, and destroy them physically,” thousands of Falun Gong practitioners who went Beijing to appeal for Falun Gong were arrested. Abductions, detentions, and torture were taking place around the nation.

As the CCP launched the persecution utilizing state apparatus, harvesting organs from living Falun Gong practitioners became a lucrative way of “destroying them physically.” The CCP used the military, armed police, prisons, and labor camps for this dark deed.

The entire process is a state-orchestrated crime directed by the government, and carried out by the military. A large organ bank was established with medical data of imprisoned Falun Gong practitioners, thus creating an organ data network. 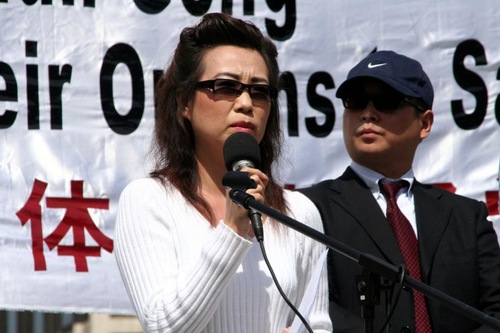 Anne, the wife of a former surgeon who removed corneas from about 2,000 living Falun Gong practitioners, along with a second witness named Peter, were the first people to expose forced organ harvesting.

In early March 2006, a witness first revealed information about the Sujiatun labor camp in northeast China, where Falun Gong practitioners were detained for the purpose of having their organs harvested. Soon after the initial announcement, a former surgeon's wife came forward saying that her husband had removed corneas from about two thousand living Falun Gong practitioners from late 2001 to October 2003. The internal organs were also removed, and the practitioners' remains cremated.

An elderly military doctor from the Shenyang Military Region who wishes to remain anonymous confirmed the existence of Sujiatun Concentration Camp, and stated that a total of 36 concentration camps like Sujiatun existed in China.

A former Minister of Health for the Chinese People’s Liberation Army (PLA) General Logistics Department discussed an order from Jiang to start organ harvesting in an undercover investigative call in September 2014.

The following is the audio recording of the investigator's phone conversation with Bai Shuzhong (白书忠):

Audio recording of the phone conversation with Bai Shuzhong (1.5 MB, right-click to download)

Bai said during the phone call, “Back then it was Chairman Jiang … there was an order, a sort of instruction, that said to carry out such things, organ transplantation… Because back then after Chairman Jiang issued the order, we all did a lot of work against Falun Gong…” “…that is to say, it was not just the military who was doing kidney transplants…”

This corroborates a telephone recording released in August 2013, during which Bo Xilai, while visiting Germany as Chinese Minister of Commerce in 2006, admitted that Jiang gave the order to begin live organ harvesting.

Audio recording of the phone conversation with Bo Xilai (1.5 MB, right-click to download)

The recording was made when Bo Xilai was visiting Germany as the Minister of Commerce, and confirms that Jiang Zemin gave the order to harvest organs from Falun Gong practitioners.

The Chinese military and armed police expanded and built large detention facilities, prisons, and forced labor camps inside military bases to hide this crime from the public.

The General Logistics Department of the Army set up a central database system as a living organ bank. The database includes the identities of detained Falun Gong practitioners, and other pertinent information such as their blood types.

The General Logistics Department is responsible for the security of the secret camps, managing the availability of organs for hospitals, as well organ transportation, accounting, and security. Military and police hospitals are the major players in the organ harvesting industry. Selling organs to civilian hospitals is more of a showroom to attract foreign transplantation patients, and make a small profit.

The military doctor quoted above disclosed the process, “Falun Gong practitioners and other detainees are detained using their real names. When they are selected as organ donors for transplants, fake names are used. In other words, a false identity is created. However, the person's information is available, and a voluntary transplant organ donation form is signed (with a falsified signature). I have encountered over 60,000 of these documents with falsified signatures.

“All of them state that the individuals voluntarily agree to be organ donors, and will be responsible for any consequences. Some of the forms are even signed for heart transplants. Many signatures appear to be in a single person's handwriting. These documents are kept for 18 months, and must then be destroyed. The documents are kept at provincial-level military bases. Reviewing these documents would require the permission of the commissioner from the CCP Central government stationed in the local area.

“A physical examination is then conducted, and followed by organ removal for transplantation. If the transplant is not successful, the documents on the organ source, along with and the body, must be destroyed within 72 hours. All of the documents and the body (sometimes even a live person) must be cremated, and the cremation must be certified by military management personnel. These military personnel have the right to arrest, detain, or execute any doctors, police, paramilitary police, or research staff who leak secrets to the outside world. The military personnel have clearance from the CCP's Military Commission.

“There is actually a large global network of organ harvesting and transplants, and the transactions are centered in China. Since 2000, more than 85% of the world's organ transplants have been done in China. This number comes from a document within the Military Commission. A few people were promoted to generals for their 'accomplishments' in this industry.”

Chinese state-run media reported that Wu Mengchao, a leading researcher of immune rejection in liver transplantation, and the president of the Eastern Hepatobiliary Surgery Hospital of Second Military Medical University, found a way to prevent the body from rejecting a liver transplant. He had completed over 4,000 liver transplantations himself by late 2010.

Jiang Zemin met with Wu Mengchao four times, and awarded him “Model Medical Expert” and a first-grade hero medal. Sun Dafa, political commissar of the General Logistics Department, issued an award of one million Chinese yuan (USD$161,163) to him in at a ceremony in Shanghai on January 17, 2006.

The Military General Logistics Department provides fresh organs on demand to hundreds of Chinese hospitals, both military and civilian, and collects cash from the hospitals for the organs provided. Most of the hospitals doing organ transplants belong to the military. Selling organs to civilian hospitals is for the purpose of recruiting potential customers from overseas.

The revenue from organ transplantation is not counted as part of the military budget. Thus the live organ transplant industry is a highly profitable way for military officials to pocket money, especially those at high levels.

The World Organization to Investigate the Persecution of Falun Gong researched published medical research papers and journals, as well as numbers publicized on hospital websites in 2014. It estimated that more than 800 hospitals in China had organ transplantation facilities, and had completed 160,000 kidney transplantations, 36,000 liver transplantations, and 120,000 cornea transplantations.

Li Xiangtie, surgeon and urology department director of the General Hospital of Jinan Military Region, led the department to set a record of completing 16 kidney transplantations in 24 hours.

Shanghai Changzheng Hospital, attached to the Second Military Medical University, claimed it did 120 liver transplants for patients with severe hepatitis between 2003 and 2006, and went on to claim that the fastest matching liver was found within four hours after the patient entered the hospital.

The price of a kidney transplant is publicly listed at USD$60,000 by the First Attached Hospital of China Medical University on its international organ transplantation website. The same website stated that liver transplantation costs were USD$100,000, lung and heart transplantation was USD$150,000.

The hospitals involved in organ harvesting have made huge, bloody profits. Number 309 Hospital, named as the “Military Organ Transplantation Center” by the General Logistics Department of the Ministry of Health, saw its organ transplantation center surge in revenue from 30 million Chinese yuan in 2006, to 230 million yuan in 2010.

Daping Hospital, attached to the Third Military Medical University, saw organ transplantation revenue increase by 25 times in 10 years, from 36 million yuan in 1999, to 900 million in 2009.