Liaoning Practitioner Tortured in Prison After Six Years Away from Home

(Minghui.org) Electric baton shocks and cigarette lighter burns are only two of many forms of torture Mr. Zou Jiling (邹吉令) suffered in Shenyang No. 1 Prison, where he has been serving a 10-year term since October 2010 for producing and distributing fliers exposing the Communist regime's violent persecution of Falun Gong practitioners in China.

Mr. Zou's family suspects that their visitation requests had been denied because authorities tried to cover up the torture and other abuses. They learned from relatives of another imprisoned Falun Gong practitioner that he had sustained a head injury in the prison, which left him with a two-inch scar. He looked emaciated, and his hair had turned gray. His health condition remains precarious.

Mr. Zou had previously been arrested for his belief in 2003. He escaped after being tortured in police custody and was forced to leave home until he was recaptured in 2009. His wife was detained in a forced labor camp for two years, and his daughter was forced to quit school.

Rearrested after Six Years Away from Home

Following his escape in 2003, Mr. Zou moved to Donggang, Liaoning Province. On December 21, 2009, more than a dozen police officers broke into his residence and arrested him.

The next morning, officers ransacked Mr. Zou's home and seized 68,000 yuan in cash, his motorcycle, computers, cell phones, printers, and various household items. In addition, police confiscated large quantities of CDs, Falun Gong books, and copies of the Nine Commentaries on the Communist Party. In total, the seized property is worth approximately 140,000 yuan (~$22,500 USD).

Police interrogated Mr. Zou at the Dadong District Police Department. In the process, officers hung him up, burned his nose, and deprived him of sleep.

The same morning, 17 other Falun Gong practitioners and six of their family members were arrested in the cities of Donggang and Dandong. Among them was a child under ten years old.

The case against Mr. Zou and the other practitioners was submitted to Donggang Procuratorate in March 2010 and transferred to Donggang Court. Mr. Zou's attorneys from Beijing were initially denied a meeting with their client at the Donggang Detention Center. When they finally met, his attorneys reported seeing scars on Mr. Zou's wrists.Only four of Mr. Zou's family members were allowed to attend the trial on July 22, 2010. Other Falun Gong practitioners were also blocked outside, while the courtroom was filled with 610 Office agents, police officers, and staff from the Procuratorate and the court.

Mr. Zou testified that he had been tortured in police custody. His attorneys, Mr. Li Changming and Mr. Zhang Chuanli, refuted the charges against Mr. Zou and vowed to take legal action against the officers who had tortured him.

While the judge and the prosecutor did not counter the defense arguments, Mr. Zou was sentenced to ten years of imprisonment and transferred to Shenyang No. 1 Prison in October 2010.

When Mr. Zou refused authorities' demands to renounce his belief in Falun Gong, he was put into solitary confinement. Initially designed for violent prisoners, these unlit cells became a place to torture and “transform” Falun Gong practitioners.

The prison also contains a special zone formerly called the “strict management team.” Thirty-three Falun Gong practitioners, including Mr. Zou, have been held in this area since March 16, 2012. They have been subjected to many forms of torture:

Mr. Zou, his wife, and his daughter started to practice Falun Gong in 1998. His family recalled that his hot temper improved and he kicked many of his bad habits as a result. His wife and daughter became healthier and open-minded, as well. However, the happy family suffered when the Communist regime began to suppress Falun Gong, and was later torn apart by the ruthless persecution.

Mr. Zou was arrested on May 14, 2003 for printing fliers to raise public awareness of the persecution. The police shocked the handcuffs he was made to wear with high-voltage electric batons when he refused to disclose the whereabouts of other practitioners. They switched to directly shocking Mr. Zou's sensitive body parts, including his mouth and face, when the indirect electric shock failed to make him talk. 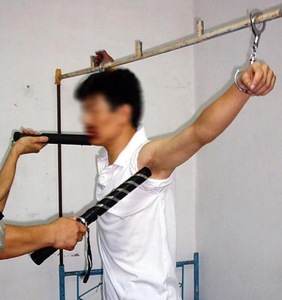 Officers beat Mr. Zou using his own belt, kicked him, and shocked his legs and waist with electric batons. On the verge of death, he was taken to a hospital at midnight. He woke up at around 4 a.m. and managed to escape while the officers were asleep.
Mr. Zou's wife was arrested four months later while distributing fliers to inform the public of the persecution. After being tortured in police custody, she held a hunger strike in protest and was sent to Dalian Labor Camp for two years.