(Minghui.org) The 2014 Australian Experience-Sharing Fa Conference was held in the Canberra Theatre on September 29, 2014. Practitioners from across Australia came to Canberra to hear fellow practitioners share their thoughts on studying the teachings well and cultivating solidly.

The organizers received about 150 experience-sharing articles, and 24 were selected to be read at the conference. They covered a wide range of topics, from explaining the facts at tourist sites, to making phone calls to China, to telling government officials about Falun Gong, and collecting signatures to stop live organ harvesting. 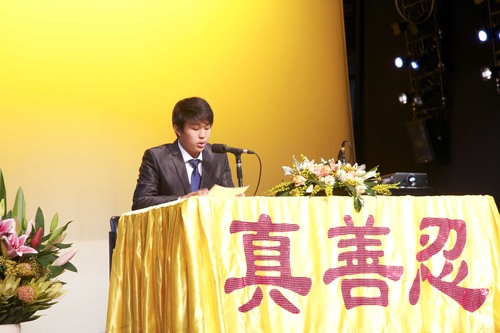 A practitioner shares his cultivation experience at the conference

Ms. Man, who is in her seventies, has been telling people about Falun Gong for more than ten years, both at tourist destinations and over the phone. “I always do the five exercises early in the morning, followed by clarifying the truth at tourist sites, and then making phone calls to China in the afternoon. I hope I can help Chinese people learn the facts instead of blindly following the Party propaganda.”

Despite her tight schedule, Ms. Man pays careful attention to Fa study. “In addition to Fa-study in the evening, I look for other opportunities to study the Fa—such as listening to the lectures when I walk.” Ms. Man said she has been doing this almost every day for the past five years.

Annie, who often spends more than ten hours per day at tourist sites, also senses the urgency to let Chinese tourists know the facts. “They [the Chinese tourists] have been deceived by the Chinese Communist Party (CCP) hate propaganda for a long time. They will sink with the Party unless they quit the organization.” With her help, thousands of tourists have decided to quit the CCP and its affiliated organizations over the past 12 months.

Ms. Yue, 75, said that the Chinese tourists would be blessed by separating themselves from the Party. “Their eyes were shining and their faces glowed after they quit,” she said.

Even new practitioners have participated in tourist site activities. Ms. Wu, who is almost 80, said she had witnessed many miracles in her cultivation. “Shortly after starting to practice, I could feel Master had installed Falun for me. After learning to meditate in the full lotus position, having my physical body purified, I gradually realized the importance of doing the three things.” Ms. Wu said she went to the tourist sites regularly to join other practitioners. 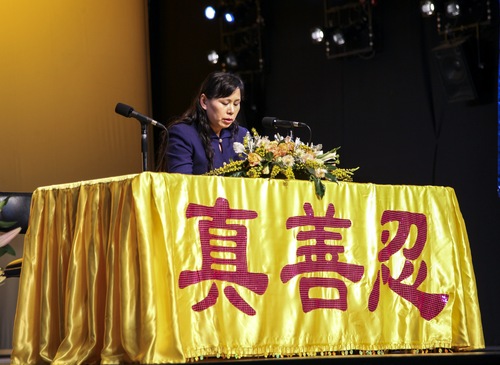 A practitioner shares her cultivation experience at the conference.

Daniel and Linda, two coordinators of a new media outlet operated by practitioners, shared how they dealt with difficulties when they started the project. “We had to assume responsibility and solve the problems. More importantly, to make breakthroughs, we practitioners had to work together as one body.” “We needed to do all this to improve the news media's quality and integrate it into the community, so that more people could learn the facts.”

Mr. Huang, an immigrant from Shanghai, has lived in a small inland town, Albury, for two years. With very few tourists around, Mr. Huang found his own path to clarify the truth to people. Starting in local churches, he informed the local residents about the practice, as well as the harsh suppression in China. His efforts caught the attention of a local news media, which not only carried a series focusing on how Mr. Huang was mistreated in China for his belief, but also videotaped him and other practitioners doing the exercises. More people learned about Falun Gong through the video available on the news media's website.

Not all of the practitioners' efforts were so straightforward. When West Australian practitioners invited Shen Yun to perform to Perth, they encountered interference from the Chinese Consulate, which sought to discredit the company. Practitioners contacted Chinese consulate officials directly about this and publicized what was going on. In the end, Shen Yun did perform in Perth.

Feedback from Conference Attendees: “We Are Validating the Fa, Not Ourselves”

Dorothy, a new practitioner, was moved by these experiences. “My son has been practicing for many years--since he came here from China ten years ago. We did not understand him in the past and, when my husband came to visit him last November, we even thought about making him stop practicing.”

But that didn't work out. After watching NTD television programs and reading the Epoch Times newspaper, Dorothy was surprised to learn things about Falun Gong she did not know in China. Further reading and noticing how her son had improved convinced her to take up the practice as well. “I am 60 already, but practicing Falun Gong makes me feel much younger. I read Falun Gong books every day, and go to Melbourne Chinatown every weekend to distribute materials.” Dorothy said that it doesn't tire her out at all, “It makes me happy, because I know I am doing the right thing.”

Ms. Pan, who has practiced for many years, said the conference benefited practitioners a great deal. “There is limited time left, and we have to make good use of it to save people.” She said practitioners needed to catch up with the Fa-rectification, instead of staying at the stage of personal cultivation. "Saving more people is something we must do, and do well, because that is Master's expectation for us. I am glad we had lots of sharings on this today--I really liked them.”

Ms. Liu was also touched by what she heard. “Many practitioners are very diligent, and they were able to consider things based on the Fa. ” She said everyone had made great progress, and, “More importantly, we have realized that we are validating the Fa, not ourselves.”

Gaps Identified When Comparing with Other Practitioners

“I would definitely have regretted missing this Fa conference today,” Rona said, “because it was so good.” She said she was very glad to see how diligent other practitioners were, because they helped her to see her own attachments. “Take the example of the practitioner who was almost 80 years old. She has not practiced very long, but she did very well. That made me review what I have done these years, and reminded me of the early days when I first started to cultivate.

“Without comparing myself with these practitioners, I often assume I am doing everything right. Now, I am able to see so many of my attachments.” Rona said that although her primary involvement in Dafa projects was media work, she did learn a lot from practitioners who went to the tourist sites.

Ms. Liu agreed with her, “I used to think I was very capable, and rarely respected other practitioners. Now I know such a mentality is rooted in selfishness. In other words, I was validating myself.” She said that during an event in Canberra one time, she was able to help 81 Chinese tourists quit the CCP and its affiliated organizations in two days. “Noticing that some practitioners were unsuccessful in persuading Chinese tourists to quit the CCP, and some did not even come to the event, I felt smug. But today, after learning that some practitioners helped 200 or 300 Chinese people quit the CCP organizations in a single a day, I was embarrassed by the thoughts I had earlier.

“I am very grateful for Master's compassion, which gives me opportunities for improvement and truth-clarification.” Ms. Liu said she was moved to tears when she thought about it, “Master has sacrificed so much for us. I have no excuse to slack off. I just have to do the three things better.”

“Military Officer Shares His Experiences in Clarifying the Truth”