(Minghui.org) Mr. Wang Sheng, a Falun Gong practitioners in his seventies, was illegally arrested and beaten by police officers. His tailbone and femur were fractured during the beating. The officers then tortured Mr. Wang during interrogation and locked him in a cage to humiliate him. Mr. Wang still cannot walk without aid. 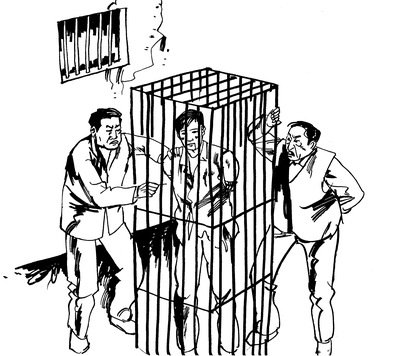 Torture illustration: Locked in a cage

The police at first refused to tell Mr. Wang's family where he was or let them see him. After making repeated requests, the family was finally told about his situation.

Mr. Wang's son, Wang Yantao, has brought a lawsuit against police chief Li Jianqi of the Domestic Security Division. The younger Wang wants chief Li, who made the arrest, to be held accountable for torturing his father during the interrogation.

Wang Yantao's Account of What Happened to His Father, Mr. Wang Sheng

“After attending a friend's wedding banquet in Changchun on April 26, my father took a bus back to Gongzhuling City at 5 p.m. As he got off the bus, police chief Li Jianqi and others from the Domestic Security Division seized him. Two officers held my father while Li Jianqi swore at him, punched him in the chest three times, then kicked him in the lower back, fracturing his tailbone.

“Li Jianqi and the others took my father to the Domestic Security Division and locked him in a cage. Even though they knew that my father had broken bones and could not stand, they still handcuffed him so tightly that the cuffs cut into the flesh. My father couldn't bear the pain and asked them to loosen the handcuffs, but they refused. They then humiliated him by forcing him to crawl on the floor to entertain them. He was kept in the cage the whole night.

“The next day, Li Jianqi ordered my father to sit on a metal chair in the interrogation room. He was in so much pain that he begged them to let him lie on the floor instead of sit. The police refused. They tortured my father until 10 a.m. and then interrogated him until 3 p.m. During the interrogation, Li Jianqi did not listen to my father's explanation at all; instead, he forced him to follow their prompts to extract a confession from him. When they were satisfied with his 'confessions' they locked him back up in the cage.

“At 8 p.m. Li Jianqi and others took my father to a hospital. He was examined and diagnosed with an ischial fracture. They put my father in custody in the hospital hallway overnight and then took him to Xinkang Hospital in Changchun. During the ambulance ride to Xinkang hospital, Li jianqi lied and told my father that as long as my father did not try to sue him, he would release him after some time.

“In the notice to the 'detainee's family,' Li Jianqi lied to us that my father was in the Gongzhuling City Detention Center. After we learned that my father had been injured by Domestic Security officers, we filed a complaint with the court. Li Jianqi was furious when he heard about it. He went to Xinkang Hospital and lied again, saying that my father would be released soon and that we should not file a complaint.

“We received notice on August 15 that my father had been taken by the police from the hospital to the Gongzhuling City Detention Center and was in custody there. My father has severe diabetes and the tailbone fracture has not healed. He cannot walk without the aid of crutches.”

Mr. Wang Sheng, Over 70, Tortured, Family Not Told His Whereabouts or Allowed to Visit Him