(Minghui.org) After detaining Falun Gong practitioner Ms. Zhang Liping for two months, officers from the Domestic Security Division submitted fabricated materials to the Procuratorate in an attempt to put her on trial.

Ms. Zhang and two other practitioners were illegally arrested on the evening of June 14, 2014, while distributing informational materials about Falun Gong. She was later held at the Tai'an Detention Center.

This is the fifth time that Ms. Zhang has been arrested over the past 15 years of persecution. She has twice been sentenced to forced labor camps and has been detained for a total of four and a half years.

Although the persecution has caused great harm and hardship for her and her family, Ms. Zhang has persisted in her efforts to tell people about the benefits of Falun Gong and to expose the brutal persecution.

Ms. Zhang Liping, 59, is a retired employee from the Tai'an Brewer, in Tai'an, Shandong Province. After she started practicing Falun Gong in the spring of 1998, her illnesses, including heart disease and rheumatic arthritis, all disappeared. The tense relationship with her mother-in-law also became harmonious. After witnessing the positive changes that practicing Falun Gong brought Ms. Zhang, her daughter, younger sister and mother also took up the practice.

On December 5, 1999, several months after the persecution began, Ms. Zhang, her daughter and a few other practitioners were on their way to Beijing to appeal for Falun Gong. However, the bus driver reported them to the police, and they were arrested. Even though the police did not have a warrant, they searched and ransacked Ms. Zhang's home, confiscating a photograph of the founder of Falun Gong Mr. Li Hongzhi and her Falun Gong books.

Ms. Zhang and her daughter were detained in the Sanli Police Station for two days. They were then transferred to the Taishan District Detention Center, where they were held for 12 days and forced to pay a 240-yuan fine. They were questioned many times while in custody. Ms. Zhang was once taken to a freezing cold room and interrogated for an entire night. She was shivering all over. Her employer and the police threatened her and tried to force her to write a guarantee statement, stating that she would not go to Beijing to appeal any more.

During the period of the annual meetings of the National People's Congress and the Chinese People's Political Consultative Conference in March 2000, Ms. Zhang was detained at the brewery and was not allowed to go home until the meetings were over.

Around July 20 of the same year, her employer detained her again for two weeks. The head of the Xujialou Police Station also threatened her.

Ms. Zhang was arrested again on the evening of October 6, 2000, for handing out informational materials about Falun Gong. The head of the Sanli Police Station threatened to take her to a forced labor camp.

Section head Zhang Jixuan from the Taishan District Police Department said that Ms. Zhang would be released only if she told them where she got the Falun Gong materials. Ms. Zhang refused to tell them and went on a hunger strike to protest her unlawful arrest. The police then called her husband in an attempt to get him to persuade his wife to give them the information, but he refused to cooperate, as he supports Falun Dafa.

After 19 days of detention, Ms. Zhang was taken to the Shandong Women's Forced Labor Camp for three years.

Beaten, Shocked with Electric Batons and Forced to Do Hard Labor

Ms. Zhang refused to cooperate with the guards in the labor camp. She recited the Falun Gong teachings and practiced the exercises with more than 120 other practitioners. The guards tried to stop them. They savagely beat and shocked the practitioners with electric batons that evening, creating an atmosphere of terror in the labor camp. 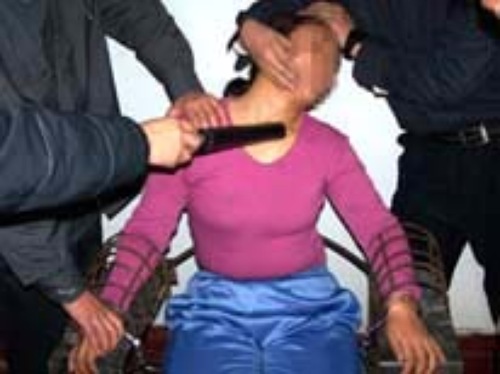 Every morning, at around 4:00 a.m. the guards would rush into the cells to beat and shock practitioners. They did not allow the practitioners to sleep until after midnight.

Guard Wang Shuzhen beat practitioners every day. Ms. Zhang said to her, “You are a law enforcement officer. Beating people is in violation of the law.” Wang kept beating her and said, “Who is beating you? No one is watching this!”

Ms. Zhang was forced to do hard labor. She had to get up at 5:30 a.m. and work until midnight, sometimes until 2:00 a.m. or throughout the night. The labor activities included embroidery, making Christmas decorations, gluing paper boxes together, boxing pencils, putting on labels using toxic adhesives, folding cement bags and unloading coal.

The intensive forced labor took a toll on Ms. Zhang's health. Her eyesight deteriorated and most of her hair turned gray. Her feet became so swollen that she could no longer put on her shoes. She also found it difficult to bend down.

Ms. Zhang was arrested for the third time on October 17, 2003, while handing out Falun Gong informational materials. She was roughly handled by two officers during the arrest, and was taken to the local police station. She was handcuffed to a heating pipe and brutally beaten that evening because she refused to give her name and address or cooperate with the police [Note: Because of the Chinese Communist Party's policy of implication, arrested practitioners often refuse to reveal their names in order to protect family, friends, and co-workers]. She went on a hunger strike to protest.

Ms. Zhang was taken to the Tai'an Detention Center the next day, where she continued her hunger strike. She was released on the fifth day after the police in Feicheng extorted 2,000 yuan from her family.

Ms. Zhang was reported to the police on August 9, 2007, when she was seen handing out Falun Gong informational materials. She was arrested and taken to the Tai'an Detention Center. The police searched her home and confiscated her computer, printer, Falun Gong books, a photograph of the founder of Falun Gong Master Li Hongzhi, cash and other personal belongings.

Fifteen days later, she was taken to Shandong Women's Forced Labor Camp for one and a half years.

Ms. Zhang was locked in solitary confinement. She was forced to get up at 4:30 a.m. and sit motionless on a small stool until 11:00 p.m. She was not allowed to move or even use the restroom. Her buttocks became infected and turned black, and her coccyx was deformed. She was in constant pain.

Ms. Zhang went on a hunger strike to protest the persecution. Her weight dropped from 75 kg to less than 45 kg. The long term abuse and intensive forced labor caused serious damage to her health. Her vision became blurry and her teeth were loosened. Her hair turned gray and she had severe pain in her sides and abdomen. She had difficulty breathing and couldn't straighten her back.

Ms. Zhang still persisted in talking to the guards and inmates about Falun Gong and kept reminding them, “Good will be rewarded and evil will meet with retribution,” but they refused to listen.

The labor camp staff beat Ms. Zhang, forced her to stand still for long periods of time, forbade her to use the restroom or wash herself. The solitary confinement cell was very hot and stuffy in the summer. Her clothes were soaked with sweat. She was only allowed to take a shower once every two weeks. As a result, her body had an offensive sweaty smell.

Her husband went to visit Ms. Zhang every month, but he was not allowed to see her. When her elderly father went to see her with her husband, the guards still refused to allow them to see her. But her father insisted. In the end, they were told that they could see her on condition that they must try to get her to renounce her belief.

They could hardly recognize Ms. Zhang when she came in, as she had become so emaciated. Her father pleaded with the guards to allow them to have a meal with his daughter, but they refused. The visit lasted less than 30 minutes.

After 13 months in solitary confinement, Ms. Zhang was transferred to another cell where she was monitored by four inmates. Since she refused to renounce her belief, they did not give her a bed-board and she had to sleep on the concrete floor.

Guard Li Xia often went around the practitioners cells at night and pulled off their blankets, in order to torment them.

After Ms. Zhang's term was extended by eight days, she was finally released on February 16, 2009.

Parties responsible for the persecution of Ms. Zhang:

“An American Doctor Witnesses the Power of Falun Dafa”