(Minghui.org) Three female Falun Gong practitioners were illegally arrested in June 2014 for passing out informational materials about Falun Gong. They were beaten and shocked with electric batons at the police station and the detention center.

Police Claim to Be Above the Law

Ms. Zhou Min, Ms. Zhang Liping, and Ms. Qi Dongling, from Tai'an, Shandong Province, were distributing flyers about Falun Gong on the evening of June 14 in a residential community in Xintai City. They were arrested by officers from the Xintai Domestic Security Division and taken to the Qingyun Police Station.

At the police station, Domestic Security Division head Feng Dayong kicked Ms. Zhou's back. She tried to reason with him, but Feng slapped her.

Ms. Zhang stood up to Feng and said, “You cannot hit people.” Feng slapped her as well.

Ms. Qi responded, “Falun Gong practitioners are innocent, what you are doing is illegal.”

This time Feng was screaming at them, “I am the law! You will see whether I have the final say or not!”

The three practitioners were humiliated and abused the entire night. 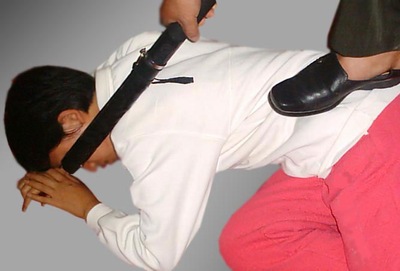 The next day, they were to have a physical examination before taken to a detention center, but they resisted. Feng beat them, pulled their hair, slapped and shocked them with an electric baton.

Ms. Qi had high blood and intracranial pressure, and Feng ordered blood pressure lowering medicine to be injected. The injection failed, so the officers attempted to force the medicine down her throat. She did not cooperate. A group of hired temporary police circled her, beat her and then pushed her to the ground to force her to take the medicine. Feng was about to shock Ms. Qi's head. The physician at the scene stopped him, “You cannot shock her head.”

The officers wanted to take their photos. The three practitioners did not comply, resulting in another round of beatings. Eventually police held them and took their photos.

The practitioners were interrogated at the detention center. Feng and his followers tried intimidate them through torture, including beatings and shocking them with an electric baton. He wanted them and their families to admit to a “crime.” 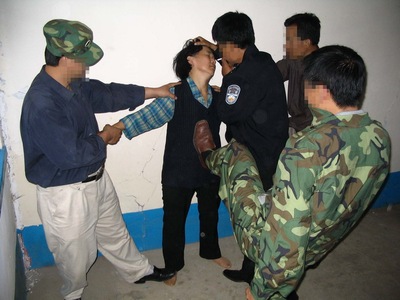 They were shocked with electric batons whenever they tried to do Falun Gong exercises in their cells. Once, an officer shocked Ms. Qi's hands, causing severe pain and forcing her to cease doing the exercise movements. The police laughed and said, “So, you still call yourself a Falun Gong practitioner?”

Ms. Qi was released on July 23 after the police ransacked her home and extorted 50,000 yuan from her family.

Ms. Zhou and Ms. Zhang are still in the detention center. Ms. Zhou's home was ransacked by police.

Additional Arrests in Xintai in 2014

At least a dozen practitioners were arrested in Xintai City since the beginning of 2014. Many more were harassed, detained, fined, had their homes ransacked and taken to court.

Ms. Hu Laixiu was arrested for putting up posters related to Falun Gong on January 13. Ms. Hu, in her late 30's, is employed by the Xinwen Mining Group.

Ms. Hu was taken to the Xintai Detention Center. Policeman Feng Dayong put chains and handcuffs on her because she did the Falun Gong exercises in her cell. Feng repeatedly beat her during interrogation. The officers from the Xintai Domestic Security Division presented forged evidence during her trial at Xintai City Court.

Mr. Shi Hua and his wife Ms. Li Shufang were arrested on April 11. They are employees of the Xinwen Mining Group. They were arrested by officers from the Wenzhong Police Station and were detained at the Xintai Detention Center for a month. Their home was ransacked and personal property including cash was confiscated.

Ms. Li Qin and her husband received a summons from the Xintai Domestic Security Division in April. They were put under house arrest and their home was ransacked. Their computer, personal property such as cash and bank deposit books were confiscated. They were released after the police extorted 100,000 yuan from them and are still being monitored.

Parties involved in the persecution of practitioners in Shandong Province: