(Minghui.org) Ms. Lu Linmei and Ms. Li Fuzhen from Suzhou City, Jiangsu Province were illegally arrested on July 16, 2014 while telling people about Falun Gong and the persecution. Officers from the Tongan Police Station ransacked Ms. Lu’s home and took away her printer, a computer and other personal items.

Ms. Li is now incarcerated in Suzhou City No. 4 Detention Center, while Ms. Lu’s whereabouts are unknown. Prior to this arrest, Ms. Lu had been arrested and incarcerated many times for her belief in Falun Gong.

The following is a brief summary of Ms. Lu’s personal account of the persecution she suffered before this latest arrest.

On March 8, 2013, Hua Guiyu and other officers from the Xuguan New District Police Station broke into my home. They took my Falun Gong books and other personal items, and then detained me in the police station for a day. In early August 2013, police came again and knocked on my door. Since I did not open the door for them, they left. However, two days later, they returned, and Zhou Wenqiu, head of the 610 Office of Suzhou City and the Domestic Security Team, intercepted my husband on his way home and forced him to call for me to answer the door. When I opened the door for my husband, a gang of police swarmed into my home. They dragged me into their car and detained me there until the end of the day.

On October 15, 2013, about five under-cover police officers, including Hua Guiyu, waited by my home. They dragged me into their car when I came back from grocery shopping, and then took me to a brainwashing center in Shangfangshan District in Suzhou. A man and woman watched me around the clock and stopped me from stepping out of the room to eat or use the restroom. An officer from the Domestic Security Team by the last name of Lu brutally kicked me.

Locked in a Metal Cage in the Basement

On the afternoon of March 22, 2012, two under-cover officers grabbed my arms and handcuffed me while I was on my way to pick up my grandson at school.

They took away my cell phone and ignored me when I explained that I needed to go pick up my elementary age grandson at school. I learned afterwards that my grandson walked home by himself, and cried outside our home for a long time since he did not have a key. In the end, our neighbor took him in. 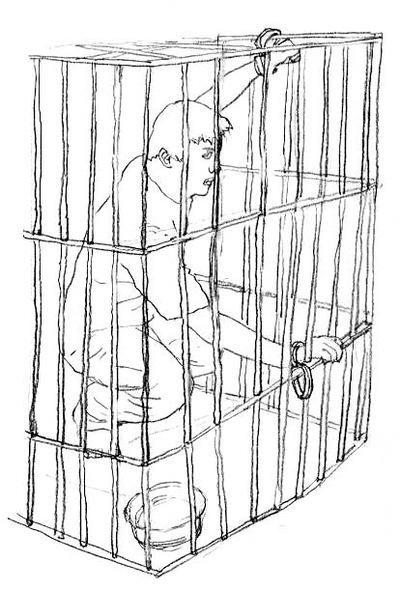 I was locked inside a metal cage in the basement of the Xuguanxin Police Station. The officers would not let me sleep. They did not give me any food or water; instead they interrogated me while I was locked in the cage.

Zhou Wenqiu and four officers brought me back to my home. After ransacking my home, opening every drawer and knocking down the furniture, they took with them five Falun Gong books, other Falun Gong materials, along with one bike, and a DVD player.

Back in the Xuguanxin Police Station, they locked me in the metal cage in the basement again for 24 hours, then transferred me to the Lumu Detention Center.

My family was supposed to come take me home on the fifteenth day. However, Zhou Wenqiu transferred me to the brainwashing center in Suzhou where I was detained for fourteen days.

Threatened and tortured by Zhou Wenqiu, I gave him a fellow practitioner’s name hoping to lessen the pressure and misery I was in. However, my attachment resulted in the arrest of fellow practitioner Ms. Lu Limin, who was later sentenced, and is still incarcerated in Suzhou Prison. I have been overcome with guilt and grief about this.

I was caught by some under-cover policemen on September 2012 for posting banners that read “Falun Dafa is good; Truthfulness-Compassion-Forbearance is good.” They tied me up and tortured me, wanting to get some confession from me. One of them poured a glass of cold water on my face, and I was detained for seven days this time.

On the seventh day, they transferred me to the Women’s Forced Labor Camp in Changzhou City. The labor camp did not want to admit me since my blood pressure was very high, so they took me back to the detention center, where I was detained for another seven days.