Taiwan: Experience Sharing on How to Better Clarify the Facts About the Persecution of Falun Gong to Chinese People (Photo)

(Minghui.org) Falun Gong practitioners in Taiwan held an experience sharing conference in Taichung City on August 3, 2014. They studied the teachings of Falun Dafa and shared their experiences in clarifying the facts about the persecution to people in China. They hope that more people in China can understand that the persecution is illegal and brutal, and step forward to help end it. 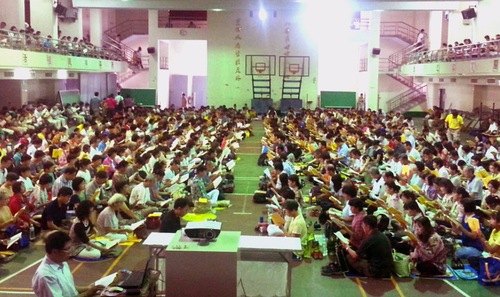 Practitioners shared their experiences in clarifying the facts of the persecution in China.

Practitioners talked about how they clarified the facts to visitors from China at tourist sites. Many of them also used telephone, smart phones, and online communication software to talk to the Chinese people.

Fangru and her family went to Sun Moon Lake to clarify the facts to Chinese tourists. One day when a tourist asked if she was paid to be there, Fangru told him that she and her family were all volunteers. She told the man that she once had lupus, and the doctor told her that she would have to be on medication for the rest of her life. Her lupus disappeared after she began practicing Falun Gong.

“I wouldn’t be here now if I didn’t practice Falun Gong. If I didn’t speak up for Falun Gong when it was being persecuted, how could I face myself?” Fangru told him.

A group of Chinese people listened as she spoke, and they all quit the Chinese Communist Party (CCP) and its affiliate organizations.

One day Fangru went to Sun Moon Lake to display posters and distribute informational fliers. From far away a man shouted to her, “The Chinese people are proud of Falun Gong!” She knew it was someone who understood the truth.

Ms. Cheng, 67, is originally from northeast China. She had a hard life and suffered from several incurable ailments. As a result, she lost hope in life. A coworker introduced her to Falun Gong in 1998, and in less than three months her ailments were gone.

She married a Taiwanese man ten years ago. She was amazed by how good it felt to be able to believe freely without being terrorized. She also understood that it was her responsibility to save the practitioners in China.

She has since been clarifying the facts at a tourist site in Tainan City. She said that when she had compassion in her mind, the other person would stop ridiculing her and begin listening quietly to what she had to say. Some even gave her the thumbs up and waved goodbye to her when they left.

Ms. Cheng once talked to two sisters from China. The younger sister was a practitioner, and the police had arrested her three times, and tortured her. The older sister cried and said, “When she was released, there wasn’t a place on her that was not injured.” The younger sister told Ms. Cheng, “Without overseas practitioners’ rescue efforts, I could have died long ago. Please thank the practitioners overseas for me.”

Traveling to Hong Kong to Clarify the Truth to Chinese Tourists

Xiuzhen said that her mother-in-law, who was in her eighties, spent seven hours traveling back and forth to a tourist site in Pingtung County every Tuesday just to tell the tourists from China about Falun Gong.

Xuizhen, like many other practitioners, spent her savings and vacation time going to Hong Kong to help clarify the facts. She went there for the first time last September. She was busy every minute, “I was exhausted, but very happy. When the Chinese tourists leaned on the window of the bus and carefully read the poster I was holding, I almost cried. They waved at me when the bus drove away.”

“That Is Despicable! I Absolutely Want to Quit the CCP”

Ms. Chiu talked to a Chinese man online and asked him to quit the CCP and its affiliated organizations to stay safe. The man told her, “I'm old and have long wanted to quit the CCP.” Ms. Chiu told him that the CCP staged the self-immolation incident in Tiananmen to frame Falun Gong, in order to justify the persecution and harvest organs from living practitioners incarcerated in prisons to make a profit. The person responded, “That is despicable! I absolutely want to quit the CCP. Please use ‘Absolute’ as my alias and quit the CCP for me.”

Zongxun helped make materials for clarifying the facts online. It took a lot of patience and coordination. Many times he wanted to delay it and work on other things, but after he had a dream about himself clarifying the facts to people in China using the Internet, he didn't dare to slack off. Participating in this has also helped improve his patience.

Developing Compassion to Save People

Lianyin said that she was indifferent in the past, and only wanted to mind her own business. In the process of making calls to China and clarifying the facts, she gradually developed compassion and became concerned about others. “As long as I truly wanted to help the other person, it would be fine if he rejected or scolded me, as long as he could eventually be saved,” said Lianyin.

Suhua used smart phones to clarify the facts. She often took a bus and noticed that almost everyone had a smart phone, and used it all the time. “When I use my smart phone to talk to people in China, I always know that it is a powerful and convenient tool,” Suhua said.

Boshu commented that most people used smart phones and tablets to keep up with the fun things, “Falun Gong practitioners use them to save people, despite the costs and the age difference.”

Ching talked about how overseas practitioners rescued a practitioner who had just been arrested in China. They called the police station where the practitioner was being held. An officer said, “I have him and can either release him or send him to prison. What do I get if I help you? Things are quite expensive here. You know that Falun Gong practitioners’ organs are quite valuable.”

The practitioners then conducted an investigation and turned the evidence over to the World Organization to Investigate the Persecution of Falun Gong (WOIPFG), which quickly published it on its website.

The practitioners arranged to repeatedly call all the numbers available to them. As a result, many people who live in the place where the corrupted officer lived, and where the police station is located, knew about the illegal arrest and the officer's extortion attempt. The practitioner was released a few days later.

When the practitioner called the officer again, he repeatedly admitted that he was wrong and asked for forgiveness. He wanted to quit the CCP using his real name, and promised that he would never again persecute local practitioners.

At the sharing conference, a practitioner from China spoke through a phone recording. The practitioners talked about how overseas practitioners helped to deter the authorities in Qinglongshan Brainwashing Center from persecuting practitioners in Heilongjiang Province.

He said that the wrongdoers didn’t like their evil deeds being exposed to the world, especially when they received calls from overseas which let them know that many people knew about their crimes. The local practitioners in Jiansanjiang collected the phone numbers of those who worked in the administrative, legal, and justice departments, and sent them to practitioners overseas, especially Taiwan practitioners.

When practitioners went to the Qinglongshan Brainwashing Center to protest, and filed several lawsuits against the persecutors, the overseas practitioners would call them at the same time. This collaborative effort terrified the evildoers and deterred the persecution.

The second time the local practitioners filed a lawsuit with the Jiansanjiang Procuratorate, and the prosecutor said, “You Falun Gong practitioners are incredible. They just called me from overseas and explained a lot of things.”

As the prosecutor was taking out his cell phone, he said, “Look, they called again.” The prosecutor seemed to know that the practitioners were innocent and he was just reluctantly following orders.