Over Sixty Practitioners Arrested in Beijing in May-June 2014

The arrests took place in multiple counties and districts in and around Beijing. Fifteen practitioners were arrested in Daxing County, 11 in Miyun, 10 in Haidian, 7 in Fangshan, 4 in Dongcheng, 3 in Xicheng, 3 in Changping, 2 in Chaoyang, 2 in Fengtai, 2 in Shunyi, 1 in Pinggu, 1 in Shijingshan, 1 in Tongzhou and Huairou, and 2 others in unknown counties or districts.

Daxing County 610 Office, the National Security Division, and police have been monitoring and following Falun Gong practitioners. They broke into practitioners' homes and took their belongings. Fifteen practitioners who hadn't broken any laws were arrested during May and June, 2014. The following are some of the arrests that took place in Daxing County.

On May 7, practitioners Zhang Yuqin and Meng Jiying were arrested and detained when they were telling people the facts about Falun Gong at a train station.

On May 9, practitioner Li Shuyan was clarifying facts about Falun Gong in a market in Caiyu Township, when she was arrested by police. Her home was searched and her personal belongings confiscated.

On May 13, practitioner Wang Xiaoping, 67, was arrested by local police for telling people about Falun Gong in a market in Lixian Township. Since Ms. Wang's husband had passed away, her little granddaughter was left at home without an adult to care for her.

On May 29, practitioner Zhao Chunrui was arrested for giving out Shen Yun Performing Arts DVDs in Panggezhuang Township. That same day, after practitioner Che Chunrong distributed truth-clarification materials, she was followed by police to her home and arrested.

On June 21, after monitoring them for a long time, officers from Lucheng Police Station arrested practitioners Du Wenge, Jiang Xiandong, Feng Yumei, and another practitioner at Du's home. Their truth-clarification materials were confiscated. That day, police from Guanyinsi Police Station and Domestic Security Division broke into practitioner Feng Yumei's home, and confiscated her two printers. They were taken to Daxing Detention Center.

On June 27, Ms. Wang Lianqun, a practitioner close to 70 years old, was reported on when she was telling people the facts about Falun Gong at Daxing Train Station. She was arrested and taken to the Daxing Detention Center. Her family was threatened that she would be sent to prison after a thirty-day-detention.

Falun Gong practitioners Wang Zicheng and his wife Zhang Aiping were tried in Pinggu District Court on June 26. Their family members who attended the trial saw the terrible condition of Mr. Wang. He had been paralyzed due to persecution. Four police officers grabbed his arms and legs and carried him into the courtroom. Even though he was paralyzed he was handcuffed and shackled.

Mr. Wang Zicheng and his wife Ms. Zhang Aiping were arrested on the morning of October 30, 2013, when they were distributing truth-clarification materials, and taken to Pinggu Detention Center. Mr. Wang had been arrested twice before and was jailed for a total of seven years in Qianjin Prison. He was forced to sit on a stool for extended periods of time which damaged his nervous system, and he was unable to walk for more than two years. After his release in May 2013, Mr. Wang regained his health through practicing Falun Gong. However, the persecution he suffered after October 2013 made him incapable of walking. He became incontinent, and his body became numb. His condition continues to deteriorate.

Mr. Wang and his wife, Ms. Zhang, were charged with “using their spiritual belief to sabotage law enforcement.” Their attorneys gave strong arguments during the trial, stating that the evidence was illegally obtained, and it couldn't be proved that the couple had committed any crimes. They also argued that the plainclothes police seriously violated the law by failing to show identification and using violence during the arrest.

Mr. Wang and his wife recounted how practicing Falun Gong improved their health and morality, and stated that the reason they distributed Falun Gong materials was to tell people how unfair the persecution was. They tried to read the brochure they distributed but were forbidden to do so by the judge.

Despite the brutal torture inflicted on him, Mr. Wang Zicheng said in his last statement that he didn't hate any of his persecutors. He said it wouldn't have been possible for him not to hate them if he hadn't cultivated himself according to Falun Gong's principles of Truthfulness-Compassion-Forbearance.

The defendants' attorneys asked the prosecutors why practicing Falun Gong was only illegal in China? Why were innocent people targeted for violent torture? They pointed out that practitioners' peaceful and rational resistance didn't violate any laws, and that the current laws and law enforcement in China actually tramples on the freedom of belief granted by the constitution. They argued that Mr. Wang and Ms. Zhang should be released immediately. The prosecutor couldn't find any words to refute what the attorneys said. The judge refused to make any decision.

Beijing police worked together with residential committees to hire the unemployed, the retired, and financially stressed people to follow and monitor Falun Gong practitioners wherever they went. The phones of practitioners were tapped.

On April 20 to May 31, six practitioners in the Fangshan District were arrested. More than twenty were harassed at home by residential committees, retired employee offices, and local police.

Some practitioners were told to go “talk” with their residential committees. They were asked questions like, “When did you start practicing Falun Gong?” “Why do you practice Falun Gong?” “Who else practices Falun Gong?” “How often do you see each other?” “Where do you get together?” “What do you talk about?” These “talks” were recorded. Some local police went to practitioners' homes with handcuffs to “talk” to them. They used mini video recorders to record all conversations.

Mr. Hao Yongsen, a practitioner from the Fengtai District, was arrested by plainclothes police on May 25. The next day, his family reported to the police that Mr. Hao was missing. The police told his family to collect evidence themselves. His family heard that he may have been abducted. The police officers said they would go visit the place of possible abduction but refused to go with Mr. Hao's family. The police told everyone in Mr. Hao's family that they had to have their blood drawn for examination. His family members asked why. The police couldn't provide a good reason. Mr. Hao was put into a detention center, and later a brainwashing center for a total of 22 days. The constant harassment and monitoring continued after he was released.

The brainwashing facility in Miyun County is near the Shuangjing Kindergarten School. The head of the brainwashing center is Tian Yingchun from the 610 Office. Others working at the center include Zhu Mingmei, Wu Ying'e, Li Xiulian, Zhang Guolan, and Liu Xuecheng. More than 20 practitioners are known to have been taken to this brainwashing center. 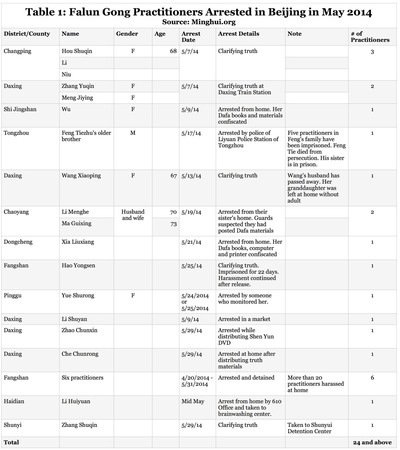 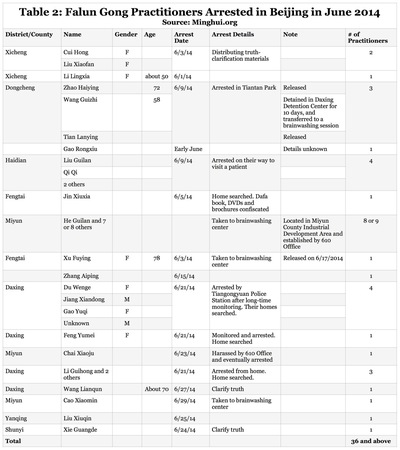 “Businessman Illegally Detained for Over 200 Days”