(Minghui.org) One of the many methods of torture used by the CCP on Falun Gong practitioners is dragging them around to "mop the floor." Sometimes the guards use the practitioners' clothes to wipe the floor, then make them wear the dirty clothes. 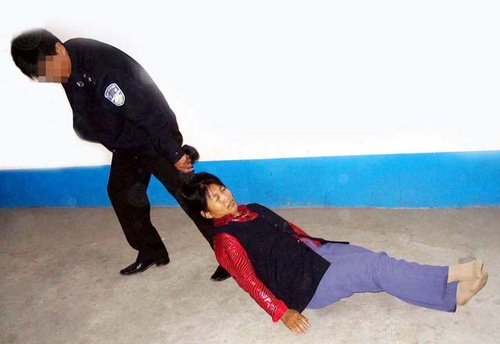 Torture reenactment: Dragged by the hair

Wiping Blood Off the Floor

At Shandong Women's Prison, inmate Zhu Huifen punched Ms. Lin Jianping in the right ear. Her ear started to bleed, and she could not hear clearly. Zhu Huifen also grabbed her hair and bashed her head against the corner of a table. Ms. Lin vomited blood, soaking her shirt and bra.

Zhu Huifen and inmate Qiu Xiuxin then dragged Ms. Lin back and forth like a mop to wipe up the floor. They wiped up more of the bloody mess with a few pieces of Ms. Lin's clean clothes.

In Handan Forced Labor Camp, Mr. Wang Zhiwu wrote "Falun Dafa is good, Truthfulness-Compassion-Forbearance is good" and other messages on the wall of his solitary cell. A head guard punched him in the face so hard that he knocked out two of Mr. Wang's teeth.

The guards knocked Mr. Wang down and shocked him relentlessly with electric batons all over. Guard Xing Yansheng then dragged Mr. Wang to the toilet and dragged him back and forth like a mop over the muddy, urine-soaked floor.

As if that wasn't enough, guard Xing Yansheng stepped on Mr. Wang's head, holding it against the floor so that he could not move. After one spot was warm and dry, Xing and the other guards dragged Mr. Wang to “warm up” another area of the filthy bathroom floor. The guards repeated this again and again until they were tired.

During her imprisonment in Shandong No. 2 Women's Forced Labor Camp in 2008, Ms. Cao Yixiang was forbidden to use the toilet because she refused to renounce her faith in Falun Dafa.

Ms. Cao eventually could not bear it anymore and wet her pants. Inmates Jiang Lixia and Lin Dandan beat her, then grabbed her feet and arms and dragged her back and forth to wipe up the urine covered floor.

Five days later, they did it again. Inmate Jiang Lixia stripped off Ms. Cao's blouse and used it to wipe up the urine, and then forced Ms. Cao to put the blouse back on. Jiang also pounded Ms. Cao's eyes and face with a mop head. When Ms. Cao tried to dodge it, they knocked her down and stomped on her hand. Ms. Cao was hit so hard that she fell and rolled across the floor, but the guard on duty turned a blind eye. 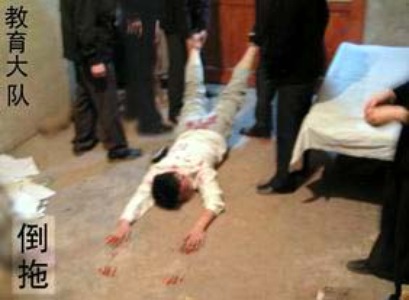 Torture reenactment: Dragged by the feet

Other Examples of Using Practitioners as Human Mops

At a Brainwashing Session in Wei County, Hebei Province, August 2001
The deputy head of the 610 Office, Ms. Chen Shuqin from Chenjiawa Township, pushed practitioners Ms. Zhou Cuimei and Ms. Xin Shuzhen down and hit them. She and others then wet the floor and dragged the two women by their hands and feet back and forth to wipe it up. They also stripped off their tops to wipe the table.

The practitioners were barely breathing after it all, but were simply returned to their room without any medical care.

At Chongqing Women's Forced Labor Camp, January 2010
Inmates Chen Zhi and Chen Tingting made practitioner Ms. Yue Chunhua stand against the wall as they poured water into her mouth, nose, and ears and down her neck. They punched her and kicked her at the same time, all as instructed by Guard leader Tao Xin.

Inmate Chen Zhi, who weighed over 200 pounds, straddled Ms. Yue, beat her, pulled her socks off, and stuffed them into her vagina. Chen also stripped Ms. Yue naked and wrote slanderous words against Dafa on her body.

Several inmates poured water on the floor and used Ms. Yue's body like a mop until the floor was dry.

“Chinese Tourist Tells a Practitioner: “You Are the Hope of China!” ”