Officials of city-level Domestic Security Divisions then organized meetings for county/district-level division chiefs, and established quotas at each level. 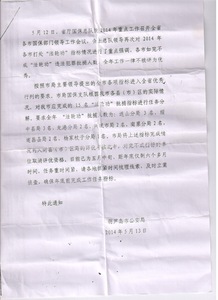 These divisions at all levels have played an active role at the front lines in persecuting practitioners since the persecution of Falun Gong began. They collaborate with the 610 Office, police stations, and community offices, and have initiated the arrests of many practitioners, especially in recent times.