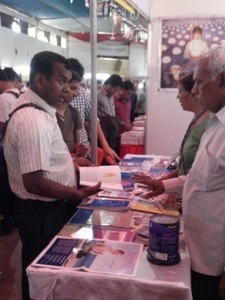 Thousands of people from all walks of life, including teachers and students, came to the Falun Dafa booth. Everyone who stopped by was given a flyer, and many purchased Dafa books. Practitioners talked to people about Falun Dafa and also informed them about the persecution of the practice in China.

Every morning, practitioners who participated in the book fair practiced the Falun Dafa exercises together at a sports field where thousands of people go for their morning walk and exercises. Many came to learn the exercises. 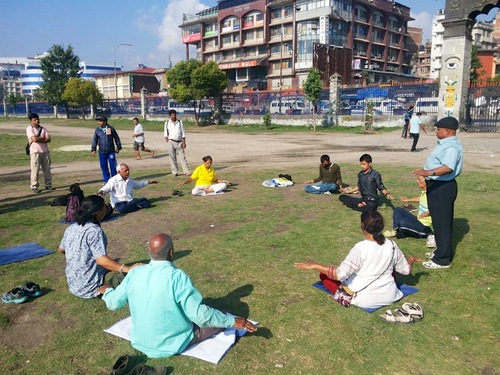 Teaching the meditation on the sports field

Indian practitioners had found out about the book fair only two months prior to the event. Some were apprehensive about going to Nepal to introduce Falun Dafa because of the communist influence in Nepal.

Later, more practitioners agreed to participate and made arrangements for the booth and for their travel. As a group, they overcame many challenges, including having to change their travel plans due to a change in the book fair schedule, and the difficult task of getting all the materials to the event.

After the book fair ended on June 5, practitioners went to the city of Pokhara, a famous tourist destination in Nepal. While distributing informational materials there, they met a young Chinese woman who taught Chinese. Due to the influence of Chinese Communist Party (CCP) propaganda, she had misunderstandings about Falun Dafa. However, after talking with the practitioners, she realized the true situation and her attitude became supportive. The practitioners also introduced Falun Dafa to a group of students near Shanti Stupa, a Buddhist shrine built atop a hill in Pokhara that attracts a lot of tourists.

Thousands of people in Nepal learned about Falun Dafa through this volunteer effort by practitioners in India.

“A Practitioner's Insights: The Requirements of Cultivation Are Strict”