(Minghui.org) Zhang Zhijun, minister of China’s Taiwan Affairs Office, along with several delegates from China, visited Taiwan on June 25-28, 2014. Nearly everywhere Zhang visited, Falun Gong practitioners were holding banners protesting the ongoing persecution of Falun Gong in China. On the last day of Zhang’s visit on June 28, he canceled almost all of his scheduled visits and headed toward the airport early. 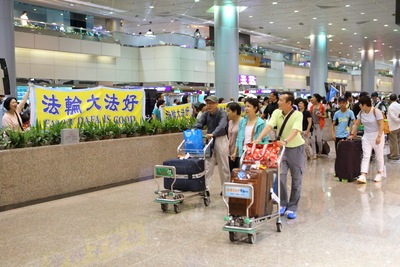 Falun Dafa practitioners wait for Zhang Zhijun, director of China’s Taiwan Affairs Office, at the airport on June 25 before his arrival. 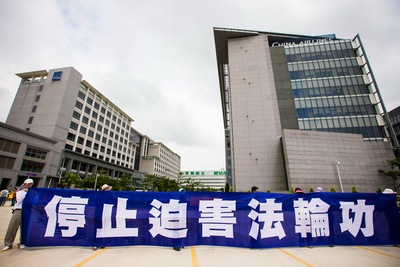 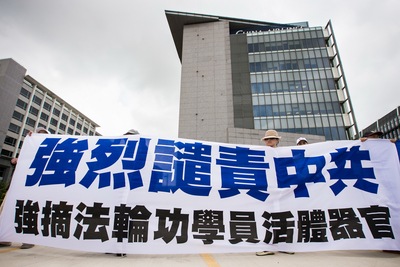 Falun Dafa practitioners hold a banner reading, “Stop the Persecution of Falun Gong” outside of Novotel Hotel where Zhang Zhijun had a meeting with Wang Yu-Chi, minister of Taiwan’s Mainland Affairs Council.

After Zhang arrived in Taiwan on June 25, he headed to Novotel Hotel near the Taoyuan Airport to meet with Wang Yu-Chi, minister of Taiwan’s Mainland Affairs Council. Falun Gong practitioners were present outside the hotel and on the streets, holding banners which read, “Condemn the CCP Forcibly Removing Organs from Living Falun Gong Practitioners.” 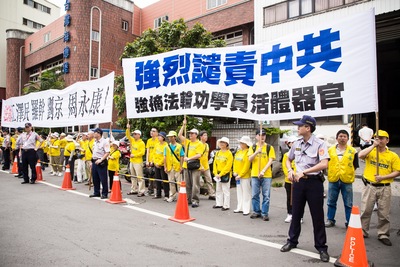 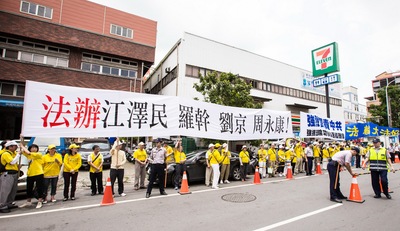 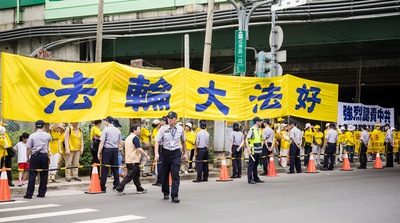 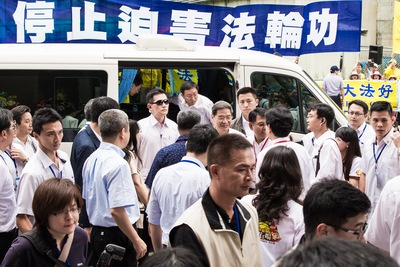 Zhang Zhijun and other delegates visit a bakery in New Taipei City, where Falun Gong practitioners meet him with a banner reading, “Stop the Persecution of Falun Gong.” 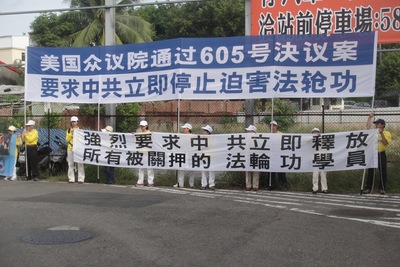 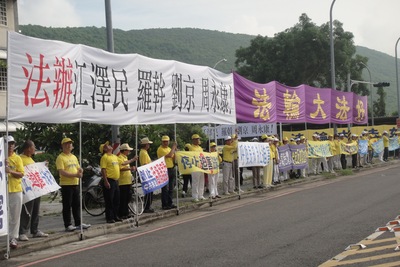 Zhang Zhijun went to Kaohsiung City to meet with Mayor Chen Chu on June 27. Practitioners held banners demanding that Chinese authorities bring to justice the perpetrators who launched the persecution of Falun Gong. 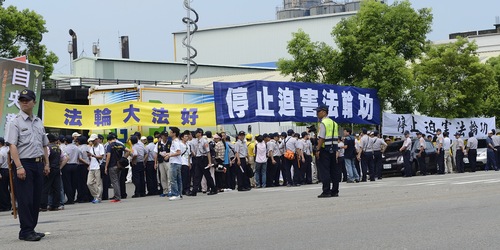 Banners demanding an immediate stop to the persecution of Falun Gong are set up along the route where Zhang Zhijun’s car will pass.

Protestors from other groups cheered for the practitioners. One of the protestors in front of the high-speed rail station said to a practitioner, “The Chinese Communist Party (CCP) is still suppressing Falun Gong and freedom of speech. Petitioners in Beijing are being arrested, beaten, and imprisoned. Who trusts the CCP?”

People in Taiwan Should Be Alert

Falun Gong practitioner Chen said that since the CCP suppresses its people who practice Truthfulness-Compassion-Forbearance, how could anyone expect it to treat the people in Taiwan nicely.

Another practitioner, Wei, said that the CCP harvesting of organs from living practitioners was the most evil crime on this planet, and it was everyone’s responsibility to expose the crime and condemn it.

Zhang headed toward Seas Bay Resort on June 27, in the southern city of Kaohsiung. He was met there by protestors who threw paint and paper money for the dead at him. He canceled two of his scheduled visits in Kaohsiung and Taichung the next day. 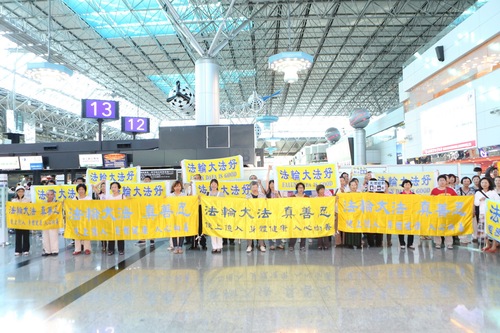 Before Zhang Zhijun leaves Taiwan, the Falun Dafa practitioners wait for him at the airport, telling him that Falun Dafa is good.

Zhang and the other delegates arrived at Taoyuan International Airport on June 28, an hour and half before their scheduled departure time. The Falun Gong practitioners waited for them and displayed banners to send the message, “Falun Dafa is good” before he left.